Taiwanese beekeepers are finding it hard to cash in on demand for clean, traceable produce.

Jiang's family has been keeping bees for 80 years and he now manages 500 hives in the northwest county of Hsinchu. In total his family run around 2,000 across northern Taiwan.

A string of food safety scandals in Taiwan has driven demand for clean, traceable produce, with pure honey seen as particularly beneficial -- whether stirred into water as a summer thirst-quencher or used as a sugar substitute in desserts.

But although domestic appetite is voracious and outstrips supply, which keeps prices high, beekeepers say it is hard to fully capitalise as climate change and disease hamper expansion.

This year alone saw a series of typhoons and an unusually cold January affecting early blossoms.

Jiang, 54, who sells most of his produce through his shop in Hsinchu city under the name "Ah-bin Pure Honey", says his production falls 30% due to the adverse conditions.

The situation for the whole family is even worse: overall production across the thousands of hives they run has dropped by two thirds, he says.

The unpredictability of the seasons is reflected in islandwide honey output over the past five years.

But production has been unstable since 2011, when it peaked at 15,000 tonnes, with extreme weather a major factor.

"We prepare for everything as much as we can," he told AFP. "What we can do is manage the bees well and do our best to keep more bees. The rest depends on the weather."

Disease problems troubling beekeepers around the world have also taken their toll on Jiang's stock.

In 2005 he saw half his bees wiped out by a bacterial infection.

He quarantined his queens, burned the infected frames from his hives, and started again, sharing those hard lessons with other local beekeepers.

"In Taiwan, climate change has been huge," says Wu Tzu-hsien, a senior apiculture expert for the Agriculture Ministry. "If the changes are too extreme, bees cannot control their body temperature and die."

In rural Yilan county in the northeast of Taiwan the "Bee Farmer" cafe and education centre sits against a backdrop of misty mountains.

Giant bee statues greet visitors, who buy everything from royal jelly to pollen sachets at the store inside.

There is a honey museum and active hives to teach the public about bees. Visitors come mainly from Taiwan, although some from Hong Kong and Singapore also drop in.

The business belongs to Huang Tung-ming, a fourth generation bee farmer who manages 300 hives in the area, producing a variety of honeys, including longan, lychee and melon.

He has diversified to prosper, selling produce from other local bee farmers as well as his own. 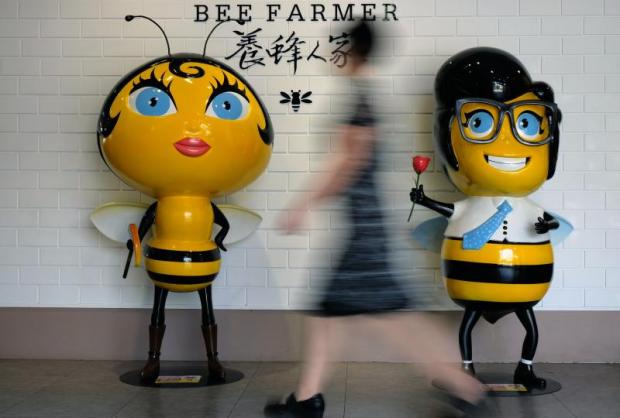 A woman walks past the entrance of the Bee Farmer cafe and education centre in Yilan.

There are 10 "Bee Farmer" shops around Taiwan but the company sells mostly online through its Chinese-language website, a more modern approach than most traditional beekeeping families. The business brings in NT$50 million each year.

"In the past, farming villages were isolated. When you produced honey you didn't know where the customers were," says Huang. "Now with the internet, with branding, packaging and a corporate image, it's much easier than before."

Building a bee brand has helped Huang offset the challenges of bad weather and bee health, both of which have affected his farms.

Eight years ago, many of Huang's bees deserted their hives, unable to find their way home after going out for nectar.

Huang, 61, believes inbreeding affected the bees' sense of direction and has since developed a method of isolating the best pairs.

That has meant his hives have not succumbed to illnesses that have killed so many bees worldwide, he says.

Despite the pressures, his son Huang Chun-yen, 33, who helps run the business, says there are still keen young bee farmers who consider it a good option in the face of Taiwan's economic stagnation.

"Young people can't find jobs that pay well," he says. "As the value of bee products is high, young people go to farming villages to learn to keep bees and develop their careers."

For Jiang in Hsinchu, looking after bees means more than just business.

He sees it as a global issue, key to environmental protection and food provision.

"Almost one third of human food relies on bee pollination. Bees play an important role in the eco-system," he says.

Meanwhile, he does his best to defend his own hives against whatever nature throws at them.

"We believe we have to work hard first, and then heaven will help us," he says. 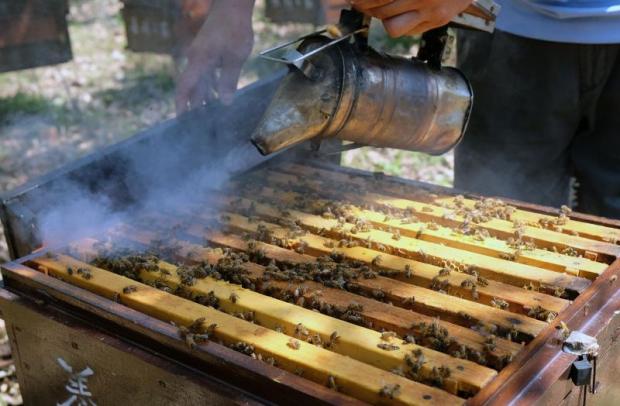 A beekeeper uses a smoker to keep the bees calm.