Nok Air is decelerating its expansion into China, apparently due to the impact of the crackdown on "zero dollar" inbound tours.

The SET-listed budget carrier has put the debut of scheduled flights to Kunming and Guangzhou from its Don Mueang airport base, previously planned for next month, on the back burner.

But the airline, 39% owned by Thai Airways International, hopes to be able to announce the inauguration dates of the two Chinese routes in February.

The launch will form part of a campaign in which Nok Air and its long-haul low-cost affiliate NokScoot, in collaboration with the Ministry of Tourism and Sports, intend to stage in the northern port city of Qingdao primarily to lure Chinese visitors to Thailand.

The event will encompass high-ranking officials in charge of tourism and travel as well tourism-related operators from several cities where NokScoot operates flights to, such as Nanjing and Hangzhou.

The event has also been postponed, from this month, to allow more time to clear up the tour scam issues. 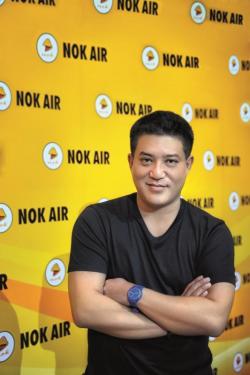 Mr Patee says he is determined to master enough Mandarin for business talks.

Tourism-related operators in Thailand have complained about businesses derived from Chinese tourists being reduced by 40% in the past few months as the authorities started to seriously crackdown on the Chinese tour scams.

The scams involve tour packages being sold at rock-bottom prices to Chinese tourists who are then forced to purchase goods and services at inflated prices, a technique that allows operators to compensate for the initial cheap package costs.

Some operators even suggested that the ministry's goal of increasing Chinese arrivals this year to 10 million, from 7.9 million last year, was likely to be missed due to the slowdown in arrivals resulting from the crackdown.

Yuthasak Supasorn, governor of the Tourism Authority of Thailand, was sceptical about operators' complaints about the extent of the impact, telling reporters that those claims need to be verified statistically before such a conclusion could be drawn.

Nevertheless, Nok Air has seen the impact on its charter flights between Thailand and China with flight frequencies on some routes being trimmed this month and December, according to Nuanwan Bhuprasert, chief financial officer of Nok Air.

During the third quarter, Nok Air operated five routes between Thailand and China on a charter basis.

Nok Air has been keen to tap the vast Chinese travel market which sees Thailand as the top destination for most outbound travellers.

The airline views China as being instrumental to future growth as its current mainstay, the domestic network, is facing saturation.

Meanwhile, in a show of his commitment to enhancing his business dealings with the Chinese, Mr Patee last week began studying Mandarin conversation.

"Being able to communicate with them in their own language is very important if we are to succeed on their home turf," he said, adding that English won't work well there.

Over the next four months, the chief executive of the 12-year-old airline is determined to master enough Mandarin for business talks.

His private tuition by a China-educated Thai teacher lasts one hour every day.