PTT Plc, the country's largest company, is 66% owned by the Finance Ministry and its funds as of Sept 5, 2016. (Bangkok Post file photo)

The government is seeking to set up an investment holding company next year for government shareholdings, part of a wider effort to improve the performance of state enterprises.

A law to boost the governance of such firms and enable the creation of the holding company may be enacted by March, according to Ekniti Nitithanprapas, the director general of the State Enterprise Policy Office.

"We’d like the holding company to work in an efficient way like Temasek or Khazanah," Mr Ekniti said in an interview in Bangkok on Wednesday, referring respectively to Singapore’s state-owned investment firm Temasek Holdings Pte and Malaysia’s sovereign fund Khazanah Nasional Bhd.

State enterprises are planning 446 billion baht of investment in 2017, according to the policy office. That’s equivalent to about 3% of gross domestic product, underlining the importance of ensuring the companies are managed well.

The new law is supposed to create a policy committee and a master plan for the sector, as well as boost transparency, formalise the way directors are appointed and evaluate corporate performance.

"This reform is crucial for long-term economic development," said Santitarn Sathirathai, head of emerging Asia economics at Credit Suisse Group AG in Singapore. "Ministries are in charge of state enterprises and often wear too many hats as shareholders, rule setters and referees, which sometimes breeds conflict of interest and inefficiencies." 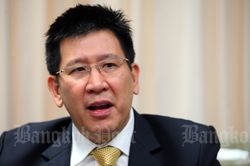 The stock market signals there’s scope for government businesses to be better managed.

An index of those companies has climbed 23% in the past five years, less than the 54% advance in the benchmark SET index, according to data compiled by Bloomberg.

The government said a number of listed and unlisted businesses will go into the holding company. Details haven’t been finalised yet. There were 52 state enterprises with total assets of 13.5 trillion baht and liabilities of 10.6 billion baht as of June 2016, according to the State Enterprise Policy Office’s website.

While the proposed law is a welcome initial step, the key will be how well it’s implemented and whether directors have enough independence and power, according to Mr Santitarn.

The reform is a priority for the government, according to Mr Ekniti.

The comparison with Temasek evokes the earlier phases of Singapore’s investment firm, which was founded in 1974. Temasek originally owned shares in former state-owned companies and began directly investing in foreign equities in 2002. It doesn’t direct the decisions and operations of its portfolio companies, according to its charter, and the Singapore government isn’t involved in Temasek’s investment decisions.

The annual growth decelerated to 3.2% last quarter, one of the slowest expansions in the region. The junta is leaning on increased public investment, subsidies for farmers and cash handouts for low-income earners to bolster an economic outlook clouded by political flux.