Lack of investment in education telling

A student checks the details of a school in Australia at the Bangkok Post Career-Education Expo. Thailand's IMD talent ranking fell three notches to 37th, the lowest level in 10 years, due to a lack of investment in education. (Photo by Pawat Laopaisarntaksin)

Thailand's talent ranking has dropped three places to 37th, the lowest in a decade, as the country has not invested enough in education and the workforce still lacks the skills to boost competitiveness, according to IMD's annual World Talent Report.

The survey by the Swiss business school assesses a country's ability to develop, attract and retain talent for companies that operate there.

Thailand's lack of investment in education was a weakness over the past 10 years, as the country ranked 31st in 2007, improving to 24th a year later. It dropped seven spots in 2014 to 34th, falling three more places to 37th this year for the same reason.

The best-ranked countries have a balanced approach between their commitment to education, investment in developing local talent and ability to attract foreign talent.

The IMD World Talent Ranking 2016, which ranks 61 economies, is based on more than 20 indicators, some of which are statistical and others drawn from the IMD opinion survey of 4,300 international executives.

Switzerland has comfortably maintained the top spot for a decade, followed this year by Denmark, Belgium (up six places), Sweden (up seven places) and the Netherlands.

Thailand invested only 3.9% of GDP in education development, flat from the past two years, while countries in the top 10 spent at least 7% to 9% of their GDP on education, said the report.

Within Asean, Singapore fell sharply by five places to 15th, followed by Malaysia down four spots to 19th. Indonesia fell three places to 44th, and the Philippines dipped seven spots to 51st.

"Talent is one of the competitive pillars of Europe. It's true the region generally continues to face a number of problems, including poor economic growth, declining momentum and negative expectations," said Prof Arturo Bris, director of IMD's World Competitiveness Center.

"But the quality of its education systems and its commitment to developing talent from a very young age to retirement should preserve its long-term competitiveness."

The opposite situation applies to many Asian countries, he said.

"They might be amazing at attracting foreign talent, but they don't invest enough in nurturing local talent," said Prof Bris.

"The US hasn't featured in the top 10 since 2008, and we've remarked before that economic power and talent don't necessarily go hand in hand." 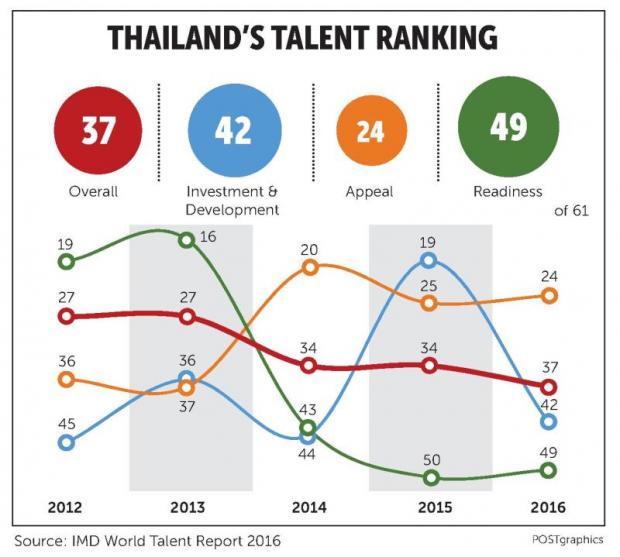