The long-awaited and ambitious standard-gauge rail network linking Bangkok and the northeastern provinces is set to get off the ground early next year after Thailand and China yesterday signed a memorandum of cooperation (MoC) on the development of railway infrastructure. 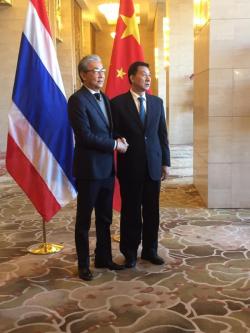 The plan is part of the framework of the Transport Infrastructure Development Strategy 2015-22.

According to Mr Somkid, Thailand and China also mutually agreed to begin the project with the Bangkok-Nakhon Ratchasima route as the first phase.

Construction for the first phase is expected to begin early next year, before the two parties expand cooperation to the second phase, Nakhon Ratchasima to Nong Khai.

Mr Somkid said continued cooperation on other high-speed rail routes is anticipated in line with China's signature One Belt, One Road initiative.

The initiative has become the centrepiece of China's economic diplomacy, with the goal of promoting regional and cross-continental connectivity between China and Eurasia. Connectivity covers five major areas of interest: policy coordination, infrastructure construction (including railways and highways), unimpeded trade, financial integration and people-to-people ties. Among these, infrastructure construction is the dominant feature of the New Silk Road.

In addition to the rail development cooperation, Mr Somkid said China has proposed assigning its state-owned China Telecommunications Corporation to team up with TOT Plc to develop the integrated internet system to link Thailand and Asean members.

China is also ready to invest in technology in Thailand and work to develop Thailand into a regional innovation hub, whereby the Chinese Academy of Sciences will be assigned to work in Thailand's Food Innopolis, billed as an innovation and development centre aimed at increasing the value of the country's crops.

Mr Somkid said Thailand and China also agreed to underscore trade and investment while aiming to double bilateral trade to US$120 billion over the next five years.

"Geopolitical issues are now crucial, as the global focus is shifting to Asia," Mr Somkid said. "We expect the US to withdraw from the Trans-Pacific Partnership to expedite the Regional Comprehensive Economic Partnership (RCEP) trade talks, for which China is key."

RCEP was launched in November 2012 with the aim of establishing deeper economic cooperation between the 10 Asean members and six trading partners: China, India, Japan, South Korea, Australia and New Zealand.

The member countries represent 29% of global trade, or $9.5 trillion.