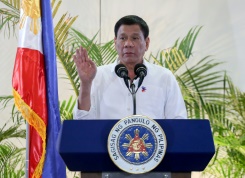 The Beijing-based Asian Infrastructure Investment Bank (AIIB) has been viewed by some as a rival to the World Bank and the Philippines-based Asian Development Bank (ADB).

Duterte has vowed to boost spending to address crumbling infrastructure, saying he would seek funds from China as he pivots his nation's foreign policy away from traditional ally the United States.

"The Philippines' membership to the AIIB would provide the government another source of long-term funding ... for the Duterte administration's unprecedented infrastructure buildup," Dominguez said in a statement Monday.

Duterte, 71, increasingly turned to China for loans and aid as he took exception to United States criticism of his drug war that has killed thousands.

Over the weekend Duterte attacked Washington for deferring aid because of human rights concerns over his anti-crime crackdown.

"Eat your aid and we will survive. I'll go to China," he said.

Jin said the AIIB would provide loans for a Manila flood management project and a bus rapid transit system in the capital, according to the statement.

The 23 billion peso ($470 million) Manila flood control project would be co-financed with the World Bank, while the 37 billion peso ($756 million) bus system, which includes construction of 63 stations, would be partly funded by the ADB, the statement added.

"We are all very eager to finalise the infrastructure projects ... This time, we are very happy we can really talk about something to do in your country," the statement quoted Jin as saying.

The Philippines under the government of then president Benigno Aquino joined the AIIB last year despite conflicting territorial claims with Beijing over the South China Sea.

Duterte signed the treaty in October and the Senate this month approved its ratification.

The Philippines is among 57 members of the AIIB, with China the largest shareholder with 30 percent.