Southeast Asia is fertile ground for e-commerce players with regional ambitions but they face many of the same obstacles as their counterparts in the physical world.

The rapid growth of the middle class and high internet usage are attracting world giants such as Amazon and Alibaba to the latest e-commerce frontier of Southeast Asia.

Amazon, after pumping US$3 billion into its India business, in November announced plans to enter Southeast Asia with local services in Singapore in the current quarter, while Alibaba founder Jack Ma has visited various Asean nations with a view to help expand the region's e-commerce industry.

However, they will face a strong incumbent in Singapore-based Lazada, founded in 2011 by Germany-based Rocket Internet two decades after Jeff Bezos shipped his first book from Amazon. Lazada is the market leader in all five countries where it is present: Indonesia, Malaysia, the Philippines, Thailand and Vietnam.

According to Anchanto, an e-commerce fulfillment specialist in Singapore, e-commerce still accounts for less than 3% of global retail sales, so there is a huge opportunity given the fact that there are no boundaries in the business.

"Cross-border e-commerce is growing faster than domestic e-commerce in Southeast Asia because of the increase in access to the internet and the availability of choices," Vaibhav Dabhade, the founder and CEO of Anchanto, told Asia Focus.

Speaking on the sidelines of the Asia Ecommerce Dialogue 2017 in Singapore last week, he said that global business to consumer (B2C) cross-border e-commerce transactions last year were estimated at 18% of overall B2C e-commerce. In terms of absolute merchandise value, cross-border business was worth about US$400 billion.

"The very first factor that contributes to the growth of cross-border e-commerce in Southeast Asia is internet availability," he said. "Initially, access to products was limited to what you could see in your neighbourhood shop … but today because of the internet I can see what is happening in terms of different seasons, fashion collections, different products and innovations coming in, so I have access to information where my world used to be limited."

A report by the global consulting firm Accenture and AliResearch, Alibaba Group's research arm, forecast that the global B2C cross-border e-commerce market would expand to $1 trillion by 2020 from $230 billion in 2014 because more consumers are going online to buy products directly from overseas retailers.

According to a study published by Google and Temasek Holdings of Singapore last year, Southeast Asia is the world's fastest growing internet region with around 14% expansion in the past five years. The internet user base is expected to increase from 260 million to 480 million by 2020.

Aimone Ripa di Meana, chief marketplace officer of Lazada Group, said his company made its big move into cross-border e-commerce in 2015, beginning with Hong Kong and China, and then Europe and the US. He believes the trend will not slow down because of growing anti-globalisation sentiment.

"Quite the contrary, we are seeing growth in Southeast Asia in the Philippines and Indonesia and all these markets are progressively opening up to cross-border e-commerce," he said.

"2016 has ... been a very exciting year for e-commerce in Southeast Asia which has seen a lot of investments. We see also the whole ecosystem of technology players, of brands that are now putting the region on the map by deciding to invest here."

However, running a cross-border e-commerce business is every bit as challenging as running a business serving multiple countries in the physical world. 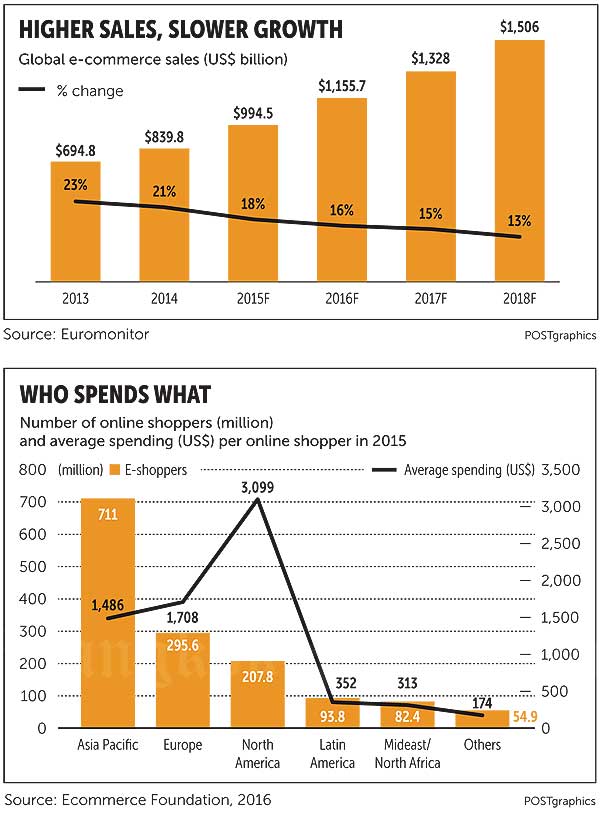 Mr Dabhade said that other enablers of the rapid growth of cross border e-commerce in the region have been pioneers such as eBay, ASOS and Net-A-Porter, along with the boom in Japanese and South Korean pop culture. Southeast Asians' love of clothing and cosmetics from Japan and Korea has been a social phenomenon that really pushed cross-border e-commerce.

"The very first one that came to this region was eBay, and it allowed a lot of small and medium enterprises and sellers from Southeast Asia to list their products on eBay's global websites and ship outside the region. There are always two sides to cross-border e-commerce and eBay was a pioneer in outbound cross-border commerce here," he said.

"ASOS and Net-A-Porter are big fashion websites that were among the first to offer shipping options into Southeast Asia, and there has been huge cross border e-commerce in fashion from Italy, the UK, Germany, France, South Korea and Japan since these countries are leaders in fashion and cosmetics."

Apart from fashion, which is the number one product category sold online in Southeast Asia, accessories are very popular, as are herbal products and fitness supplements. However, online trading of books, once one of the largest categories, is fading because of the trend toward e-books.

Nevertheless, there are still challenges that are unique to cross-border e-commerce when compared with domestic e-commerce, especially in terms of distribution. For example, if you are shipping something from Bangkok to Singapore you need to provide a shipping manifest, content, composition and origin information, which you do not need if you are shipping between Bangkok and Phuket.

"You need more data about products and you need more data about the source and origin of the products so that duties and export duties can be accurately calculated," Mr Dabhade said. "Another major difference is that in cross-border e-commerce you want to make sure that you know the landed cost of the parcel before you ship it."

The calculation of shipping and duty costs along with the management of customer expectations varies across different countries and there is also challenge in terms of "touch points", meaning any point of contact between a buyer and a seller.

"For domestic sales there are different touch points such as parcel or delivery points including convenience stores, but for international delivery you have to work with a partner locally in that country who will give you access to those touch points," noted Mr Dabhade.

Supporting different customers across time zones is another challenge.

Mr Dabhade believes the Asean Economic Community (AEC) is now the biggest catalyst for e-commerce in Southeast Asia, especially in certain "green belts" such as between Indonesia, Singapore and Malaysia which are closely connected physically and have language similarities.

"After the AEC is fully implemented there will be green channels and we will see that if there is a single clearance window for all of Southeast Asia. If a green channel is implemented between Singapore and Jakarta, that will basically bring trade between the two countries to another level and the respective governments ... are very aware of this," he said.

"Instead of running five or 10 fulfillment centres, if you are a very reliable international shipping network, you can now have one regional fulfillment centre for the whole region in a cheaper location," Mr Dabhade said.

"For example if you give me a choice, I will build my fulfillment centre in Batam (the largest city in the Riau islands of Indonesia) because from there I can serve customers in Singapore and from there on land or domestic air to Indonesia and I can serve from there to Malaysia."

Another potentially popular location for regional fulfillment centres is Bangkok because it is the geographical centre of Southeast Asia.

"Nike's number one selling item in the US is a package of three socks which costs around $8-10, but if it costs you more than $11 to deliver those socks then you cannot sell them anymore," said Charles Brewer, CEO of DHL E-Commerce.

"Nike is the best example why large companies now have centralised warehouses that are going more local and smaller in order to get as close to their customers as possible."

In the United States, he said, the Transportation Security Board (TSB) has certified certain fulfillment companies and allows them to transport containers and crates directly through special fulfillment centre warehouses, which saves shipping and clearing times because the machines that lock the crates are controlled remotely by the TSB without the need for a second inspection.

"If a fulfillment centre in Surabaya can directly pack the shipping container without having to open it at the airport, the flow of goods will be much smoother," he said. "I believe what will happen in time in Asean is that at least outbound green channels between countries will be faster at a cheaper price.

"The AEC concept of e-commerce is still under discussion and there are a lot of aspects to ratify as well as [infrastructure] to build for e-commerce. Currently all the e-commerce activity between all the countries still goes through the normal [channels] which is still cumbersome and time-consuming."