The ongoing bond yield spikes are not expected to cause a sudden shift in banks' interest rate trends as liquidity in the financial market remains high, says the Bank of Thailand's chief. 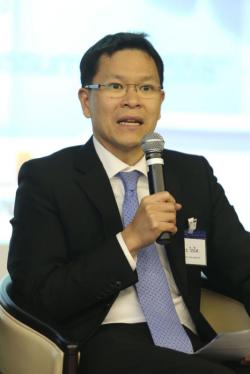 "Even though the yield of long-term bonds in Thailand has increased, tracking the US, our market liquidity remains high," said Veerathai Santiprabhob, central bank governor. "Hence, the effect won't be abrupt but rather a gradual interest rate increase."

TMB Bank chief executive Boontuck Wungcharoen recently forecast that banks' lending rates would start rising in the second half of the year because of stronger loan demand prompted by the improving economy, accelerated state investment in big-ticket infrastructure projects and a shift in corporate fund-raising methods to financial institution loans from bonds.

He said the increase in the long-term bond yield in December last year was not so high, only bringing the yield back to the same level as December 2015.

It is normal that the global bond yield follows the US trend, the world's largest economy, as the market expects high loan demand prompted by fiscal spending.

"However, changes in bond yield will remain very volatile as we've seen the curve roll back and forth because of lingering uncertainties associated with US policies," Mr Veerathai said.

The period of US economic stimulus measures is also important because most of the big-ticket investment projects will take time, especially infrastructure investment, he said.

"Infrastructure investment projects have their own process the government has to go through before they can materialise," Mr Veerathai said. "The government needs to borrow to finance such investments."

He said the volatile movement of the US dollar in currency markets started after the US election in November last year. Wild swings are expected to continue or strengthen, while those engaged in international business are highly recommended to hedge against foreign exchange risks, Mr Veerathai said.

Amid the backdrop of higher fluctuation in the financial market, Thailand's central bank will have to use caution.

"However, policies concerning capital movement are not designed for the short term, but rather lay down a structure for the long term," Mr Veerathai said, adding that the implementation will proceed gradually.

"These policies do not change in line with the economic cycle or the global economic situation in any given time," he said.

Mr Veerathai said the central bank's policy will ensure a buffer and resilience for the country's financial markets in the midst of high global fluctuation.

"I believe Mr Trump will initially focus on the North American Free Trade Agreement, not China, so the effect of his trade policies on Thailand requires further details for analysis," he said.