Vietnam on the move
Business

Vietnam on the move

People are migrating to cities in big numbers, creating a growing consumer class, big opportunities for investors and more challenges for the government.

Left  As more Vietnamese acquire the means to upgrade from motorcycles to cars, the need for better roads and infrastructure will become more acute. (Photos: Reuters)

Vietnam has made steady progress since the beginning of the Doi Moi reforms in 1986, and while the Communist government has yet to fully embrace capitalism, the country's young and growing middle class is pushing hard in that direction. 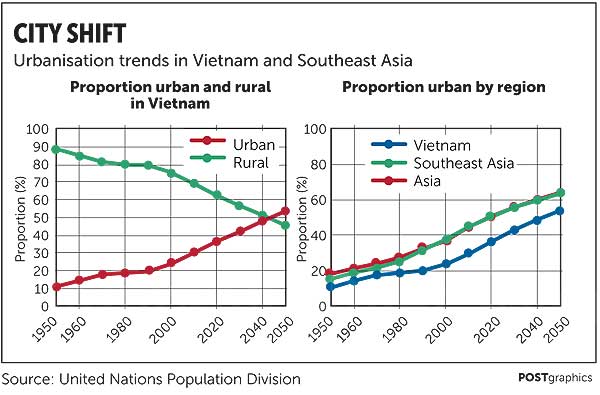 The growth of the consumer class has been spurred by a shift to the cities, with the number of urban dwellers expanding from 20% of the population just three decades ago to 34% in 2015. By 2025, half of the country's 93 million people are expected to be living in urban areas. Most of them now live in Ho Chi Minh City, the largest city in Vietnam, or in the capital Hanoi to the north. But many smaller cities are also absorbing large numbers of people migrating from rural areas.

"Cities are expanding in the south and in the north of Vietnam such as Can Tho and Haiphong. A fast-expanding economy and the rapid growth of cities has led to the increase in the middle class which provides new business opportunities, for example in the restaurant, entertainment, automotive and housing industries," said Somkiat Tangkitvanich, president of the Thailand Development Research Institute (TDRI).

Can Tho is the largest city in the southernmost Mekong Delta, with a population of around 1.3 million while the northern port of Haiphong is the third-largest city in Vietnam with 2.1 million people.

The growth of second-tier cities in Vietnam is in line with the rest of Asia. The Asian Development Bank (ADB) has estimated that urban residents in Asia now total 2.2 billion, or around half the population, and will reach 3.3 billion by 2050. The United Nations says Asia is urbanising faster than other regions and is projected to be 64% urban by then.

"Increased urbanisation, an emerging middle class with more money to spend and a real desire to spend that money to improve their lifestyle -- these demographics are driving a lot of activity in Vietnam," said John Ditty, managing partner of KPMG in Vietnam.

He said Vietnamese personal disposable income was growing at 6% per year and that within 10 years, the people of Vietnam will have twice as much money to spend as they do today.

The number of middle-class households, defined as earning US$10,000 or more, in Ho Chi Minh City is expected to expand from fewer than 2 million to more than 5 million by 2030. In the bigger picture, Vietnam's gross national income per capita based on purchasing power parity rose from $910 in 1990 to $5,730 in 2015, according to the World Bank. 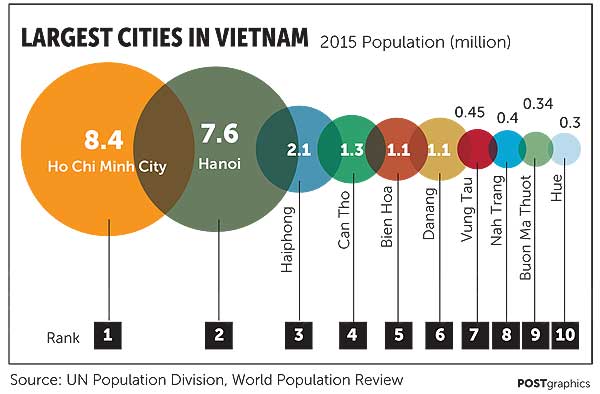 And while Asian countries such as Thailand, China, Japan and South Korea are ageing very fast, Vietnam will not see the same trend until 2040. The Philippines, Malaysia and Indonesia also will continue to be relatively young until after 2050.

The young middle class and rising wages are creating demand for consumer products, infrastructure, credit and investments. Vietnam's credit growth rose from 17% of gross domestic product (GDP) in 2015 to 18.5% last year. Vehicle sales surged 40% from in 2015, followed by 31% growth in 2016 to 135,863 units, according to the International Organisation of Motor Vehicle Manufacturers. CBRE Vietnam also reported that a record 41,907 residential properties were launched in Ho Chi Minh City in 2015 with sales reaching a new high in the same year.

According to Mr Ditty, Vietnam over the last 10-15 years has consistently outgrown other markets in Asean and most years has recorded the second-highest rate of economic expansion after China.

"The fastest-growing economies over the next 10 years are going to be Vietnam, Myanmar, Cambodia and Laos, and clearly Vietnam is the largest of those markets and will continue to grow," said Mr Ditty.

Deutsche Bank expects Vietnam to post 6.4% expansion this year, while Deepali Bhargava, an Asia economist at Credit Suisse, is forecasting growth of 6.2% this year, unchanged from 2016.

Deutsche Bank expects Vietnamese agriculture and exports to recover in 2017 while Credit Suisse expects robust export growth and an acceleration in private consumption to offset lacklustre government spending and a likely slowdown in credit growth as banks continue efforts to clean up their balance sheets.

"Many investors are talking about investing in CLMV (Cambodia, Laos, Myanmar and Vietnam) countries because they are emerging markets but the most popular is Vietnam," Wirat Sirikajornkij, partner and head of Asean+ at KPMG in Thailand, told Asia Focus.

Saowaruj Rattanakhamfu, a TDRI senior research fellow, said that despite impressive growth in the next five years, Vietnam's main concern is a high fiscal deficit that is approaching 6% of GDP and has been around this level since 2013. Public debt is near the legally mandated ceiling of 65% of GDP, which was $193.6 billion at the end of 2015.

"Vietnam's international reserves are also low at less than 2.5 months of imports [and] less than 50% of its foreign debts," she said.

"The floating of its currency has led to a decline in its value while the banking system is still in need of reforms. However, Vietnam's advantage is its labour market with a young and eager workforce. However, the cost for hiring them has also been rising by 10% on average every year."

According to the Japan External Trade Organization (Jetro), monthly wages excluding benefits for manufacturing jobs were $348 in Bangkok, $193 in Ho Chi Minh City and $162 in Phnom Penh in 2015. Japanese companies have lifted wages in Indonesia, China, Vietnam and Myanmar.

Ten percent growth in monthly wages was recorded in the Pakistan, Myanmar, Indonesia and India in 2016 but the figure was not quite as high in Vietnam, Jetro said.

Dr Somkiat said rapid urbanisation means the Vietnamese government will need to build more infrastructure which will further fuel the region's GDP expansion. Vietnam will also stand to benefit from the expected increase of foreign direct investment via free trade agreements such as the Regional Comprehensive Economic Partnership (RCEP). That deal, still under negotiation, is expected to get a major push now that US President Donald Trump has pulled his country out of the Trans-Pacific Partnership (TPP), which had been expected to benefit Vietnam more than nearly any other country.

"Anyone who produces for export in Vietnam will receive tax incentives via the existing FTA with the EU and even if the TPP collapses, some US investments are already going Vietnam's way," said Dr Somkiat.

Nguyen Tat Thanh, Vietnam's ambassador to Thailand, remains optimistic about trade with the United States despite the ominous signals being sent by Mr Trump.

"Vietnam-US relations will be further strengthened because it is still in the best interests for the American and the Vietnamese people, while the US has been Vietnam's number one export partner for quite some time," said the ambassador, who was part of Vietnam's TPP negotiation team. "Many other suggestions (regarding multilateral agreements) have been made and we will study them carefully."

Dr Somkiat said that apart from consumer products, there were substantial opportunities in the energy, construction, furniture, lifestyle, transport, IT and education sectors. Vietnam is looking to bring in more FDI to produce and export more goods.

"Vietnam is about to become the new factory of the world," he said. "You might be surprised to hear this but Vietnam's exports have expanded by 18-fold in 20 years since it mended its relationship with the US, and this sector is expected to continue to expand."

"In order to become the world's factory, it will have to build more infrastructure and ... it is getting a lot of financial support from abroad," she said. "Meanwhile its bilateral and multilateral pursuits clearly reflect its strategy to become the world's factory by being more open in free trade with the US and EU, and this has led to the need for major reforms in regulations and labour law."

Deutsche Bank, meanwhile, believes that structural reforms undertaken by the government are making progress, with a priority on improving the efficiency of state-owned enterprises (SOE) and accelerating investment in the private sector. Other reform priorities are ensuring banking system stability, building deeper capital markets and strengthening public investment.

Dr Saowaruj cautioned, however, that challenges remain including the rise of nationalism and protectionism. Consequently, investors should look for win-win situations in order to succeed, while being aware that government intervention such as veto power over SOE operations remains a risk.

It is also hard to find local partners as long as endemic corruption persists. Vietnam was ranked 113th out of 176 countries in the Corruption Perceptions Index 2016 released last week by Transparency International, compared with 112th out of 168 countries a year earlier.