New minimum wage rates and how they apply
Business

New minimum wage rates and how they apply

The minimum wage in Thailand has been driven -- both theoretically and historically -- by the cost of living, inflation and work efficiency, which often vary from province to province.

The government, through the Interior Ministry, first passed legal measures to regulate the minimum wage for workers in 1972. Consideration was made to the cost of living, standard of living, cost of goods production, business capacity, and the economic and social conditions in specific geographical areas.

Minimum wage rate: In 1998, the term "minimum wage rate" was included in the definition section of the Labour Protection Act for the first time. Section 5 of the Act defines it as the minimum rate of wages determined by the Wage Committee under the Act.

While a formal legal definition of minimum wage rate has not yet been set, the Wage Committee in 2016 applied the rationale of "a sufficient wage rate for a worker to develop skills to enable such worker to have a livelihood that is appropriate to his or her economic and social conditions, and to have a standard of living that matches with local business capacity" to determine the applicable minimum wage rate. The term "per day" means seven hours for work that endangers the health and safety of employees, and eight hours for all other work.

The national minimum wage rate that was established in 2013, whereby all workers would be paid 300 baht per day regardless of the province in which they were employed, came to an end earlier this year.

Provincial variations: According to the Notice of the Wage Committee titled "Minimum Wage Rate (No. 8)", which came into effect on Jan 1, 2017, the minimum wage system will now vary from province to province, similar to the pre-2013 system. The main reason behind the change was to support the standard of living of workers residing in major cities, such as Bangkok, where the cost of living is comparatively higher. 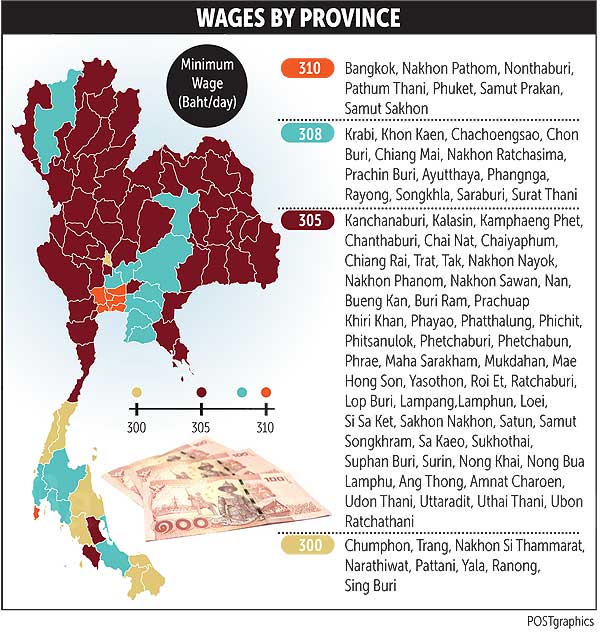 The 2017 minimum wage rate system has been adjusted accordingly to match the cost of living, inflation and work efficiency in each province. These are the first adjustments since 2013. The table shows the rates applicable to each province. An employer is prohibited from paying a wage that is lower than these minimum rates.

Skilled labour: Under the National Wage Committee's Notification on Wage Rates for Skilled Workers According to Skills Standards (No. 6) on Jan 24, 2017, "skilled workers" are entitled to higher minimum wages, effective from April 24, 2017.

Penalties for non-compliance: Employers who fail to pay the minimum wage rates prescribed under the law may face imprisonment of up of six months, and/or a fine up to 100,000 baht. It is important for employers to be aware of the relevant minimum legal requirements with regard to wages, and when they will take effect, in order to avoid punishment for failing to fulfil their duties.

Overall, the new minimum wage rates for both unskilled and skilled workers signal the government's strategy to progressively move the labour force up the value chain.

However, it is important that the government also continue to ensure Thailand maintains the key elements of affordability and price attractiveness in its labour force, particularly within Asean, in order to secure and solidify Thailand's position as a manufacturing hub and country of choice for investors.

This article was prepared by Luxsiri Supakijjanusorn, attorney-at-law in the Corporate and Commercial group at Tilleke & Gibbins. Please send comments to Andrew Stoutley at andrew.s@tilleke.com