The China-built Royal 1 ferry with invited guests aboard prepares to leave Pattaya's Bali Hai pier for Hua Hin after its official launch ceremony on Sunday. (Photo by Thanarak Khunton)

CHON BURI -- The official launch of the ferry service between Pattaya and Hua Hin was finally held on Sunday after a month's delay due to uncooperative weather conditions.

Transport Minister Arkhom Termpittayapaisith presided over the opening of the first ferry route across the Gulf of Thailand, linking Bali Hai pier in South Pattaya to the seaside resort town of Hua Hin in Prachuap Khiri Khan province.

The weekend service was suspended and will resume on Monday as more than 200 guests and members of the press, including Thai superstars Mario Maurer and Davika 'Mai' Hoorne, attended the event.

“The project was initiated in response to Prime Minister Prayut Chan-o-cha’s policy on promoting water transport between the western side and the eastern side of the Gulf of Thailand,” Mr Arkhom said.

“It provides an alternative transportation mode and will later add value to the tourism industry in coastal provinces.”

After the opening ceremony, interested guests embarked on the Royal 1 ferry for the 113-kilometre trip to Khao Takiab pier in Hua Hin and return to Pattaya. The journey was observed by a Royal Thai Navy Seahawk helicopter.

Sunday’s official launch was postponed from Jan 12 after stormy seas caused the cancellation of many trips. The ferry service, operated by Royal Passenger Liner Ltd, launched unofficially on Jan 1, with free passage offered until Jan 31.

The double decker passenger catamaran Royal 1 carries 286 economy seats, each is priced at 1,250 baht a trip per head. It also offers 44 business class seats and two VIP rooms with eight seats in each room, but the operator has not yet determined the price of the business and VIP tickets.

Royal Passenger Liner is selling an economy ticket at 999 baht throughout February, saying it is giving the discount to celebrate the month of love.

The journey is advertised to take two hours, much shorter than the five-hour road trip.

A study was being conducted to offer the service to both passengers and vehicles, and to expand the routes. 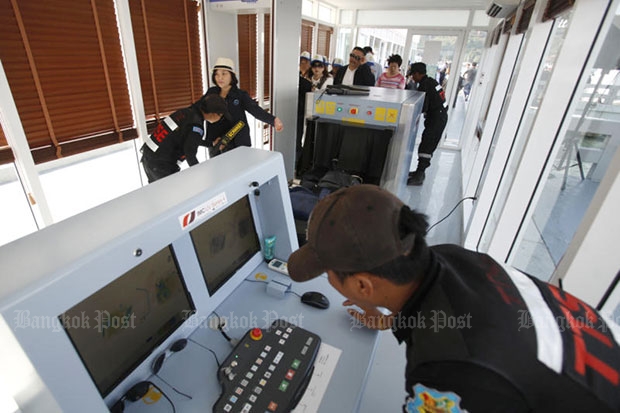