Unhappy Thais may cut out
Business

Unhappy Thais may cut out

Thai employees would rather move to a new company than stick it out with their current employers if they are unhappy at work, a new survey reveals. 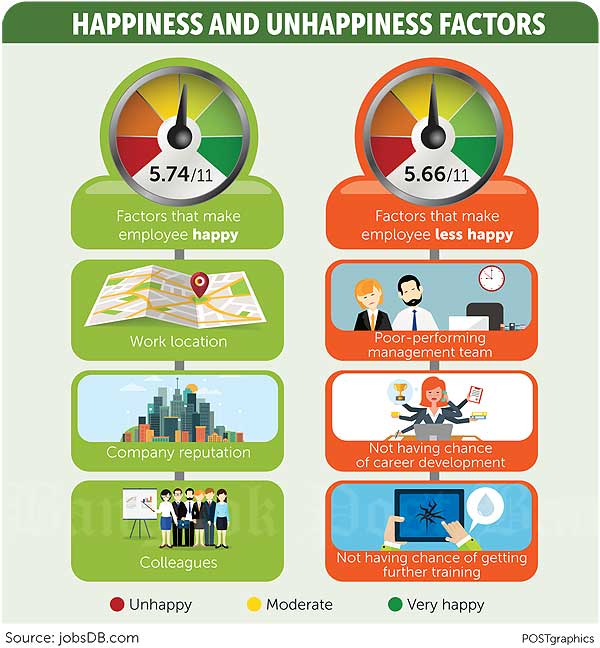 Thais put a high premium on convenient work location and the possibility of working wherever they want, company reputation and rapport with colleagues. These factors can easily be attributed to the traffic situation in the country's metropolitan areas and the social nature of Thais.

Top factors that make employees leave a company are uninspiring leadership, career underdevelopment and a lack of training, according to the report.

While these factors may not be what makes employees happy, they can be influential in their decision to exercise company loyalty or consider other opportunities.

Respondents in the highest positions -- chief executives and directors -- emerged as the happiest.

On the flip side, most employees who registered the lowest ratings are those who have stayed with companies for less than one year and specialise in transport and logistics, information technology, and marketing and public relations. They are employed in the insurance and pension funding, chemicals and plastics, petrochemicals and paper, and automotive fields.

By contrast, the most satisfied Thai employees are those who have stayed in their current companies for three to five years and specialise in management, hospitality/food and beverage, and administration and human resources. They work in architecture, building and construction, hospitality and catering, and the medical and pharmaceutical fields.

As for position, those at the supervisory level have the lowest job happiness rating.

Employees in the Northeast are also not as satisfied in their jobs as their counterparts in the rest of the country.

To increase job happiness, 34% of Thai respondents would rather look for better opportunities and get a new job elsewhere. Another 19% would consider sticking it out with their current jobs as long as they get a salary increase, while 8% would be happier should they get more recognition or a promotion.

The other markets surveyed were Hong Kong, Vietnam, the Philippines, Malaysia, Singapore and Indonesia.

The Happiness Index Report was conducted in order to get information on the factors that make employees leave or stay with a company and the programmes and systems they can create to establish a better working environment.

Respondents ranged from fresh graduates to supervisory and managerial positions and even top management from all around the country. They have stayed in their current jobs for varying lengths of time and represent various specialisations and industries.

The country is also third in the Job Happiness Index, which measures the number of people who are neutral to happy with their jobs for every 100 respondents.

Sixty-one out of 100 Thais view their work positively, compared with 71 in Indonesia. The Philippines, meanwhile, tops the index at 73.

How can banks still thrive as fintech meets 5G?