The airport is cannibalising other departments to help to clear immigration lines, but a 60-day emergency runway closure will further jam up the airport. (File photo by Somchai Poomlard)

Suvarnabhumi airport staff are being drafted in to help speed up passenger flow through immigration to cope with a spike in passenger numbers.

Staff would also be brought in to make sure all X-ray channels before passengers head to immigration counters are manned, he said.

He said the number of passengers rose by 10% in the first two months of this year.

Mr Sirote said the airport is expediting construction of a new terminal, which could allow the airport to handle 30 million more passengers a year. The airport currently has the capacity to handle 45 million per annum.

Meanwhile, a stretch of one of Suvarnabhumi's runways and a taxiway will be closed for urgent maintenance work, starting Friday.

The repair work involves 935 metres of the eastern runway linked to taxiway B1, said Mr Sirote. The work is scheduled to last 60 days and end on May 5.

Graphic below, from the management of Suvarnabhumi airport, shows the runway section to be repaired in red and the expected impact on flight capacity. 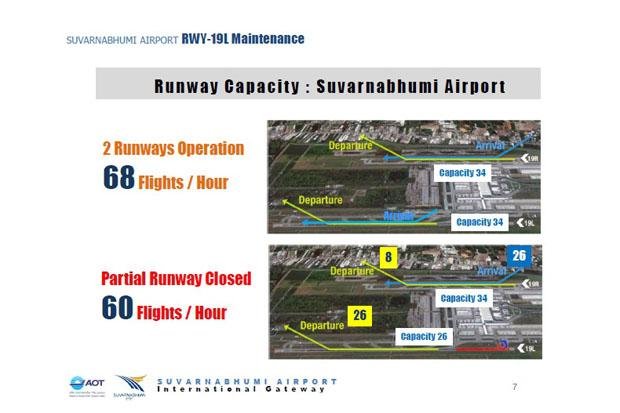 Maintenance work is necessary to ensure safety since the section has been in use for more than 10 years, he said.

Despite the work, the runway still has another 2,750 metres available for flight operations, which can handle all aircraft, including long-haul Airbus A380 aeroplanes, Mr Sirote said.

The western runway will still operate as normal.

According to the airport's general manager, the eastern runway has handled more than three million flights. Last year alone, it coped with 336,000 flights.

The runway usually has the capacity handle 34 flights per hour, but when the maintenance is carried out, this will drop to 26 flights, Mr Sirote said. No more flights will be added to the airport's schedule during this maintenance period, he said.

As part of measures to ward off the potential negative effects of the repair work, the airport has set up a monitoring centre to ensure the work is completed on time, Mr Sirote said. It is also opening a coordination centre to assist passengers in the likely event of flight delays.

The airport is also considering reducing airport fees for airlines to compensate for these possible flight delays as a result of the repair work, he said.

The airlines will assess the impact while the work is being carried out.

Airline Operators Committee chairman, Louis Moser, said all airlines have been briefed about the possible impacts of the maintenance work, adding carriers will have to reduce the gross weight of aircraft since the runway would be shorter for take-off.

Aircraft would also have to store more fuel as they may need to fly in a holding pattern before landing, Mr Moser said. Plane could be diverted to U-Tapao International Airport in Rayong if traffic over Suvarnabhumi builds up to unacceptable levels.