As the generation that grew up with the internet, social media and smartphones, millennials are changing the way marketers reach modern consumers.

That’s especially so in the six largest Asean economies — Singapore, Malaysia, Thailand, Indonesia, Vietnam and the Philippines — where the proportion of the population aged between 20 and 39 years old was 32% in 2015 (or around 180 million), compared with 26% in 1975, according to the Hakuhodo Institute of Life and Living Asean (HILL-Asean).

A new report by Deutsche Bank also notes that youth is a key characteristic of the emerging economies of India, Indonesia and the Philippines, as well as the frontier markets of Bangladesh, Cambodia, Laos, Myanmar and Pakistan. With around 2.1 billion people, nearly half of Asia’s total, these economies can leverage their large and youthful population to stimulate domestic demand and lift output at a time when the global trade outlook has dimmed, the bank said.

The large and growing size of the millennial population in Asean has compelled marketers to learn more about what makes these consumers tick and what motivates them to spend. Social, historical, cultural and environmental factors, most notably historical context and technology, seem to be the keys, according to HILL-Asean.

Established in Thailand in 2014 by Japan’s second largest advertising agency, Hakuhodo Inc, HILL-Asean recently undertook a major survey of 8,100 respondents and discovered a clear difference in attitudes as well as consuming behaviour between the two groups — those born during the 1980s and the 1990s. The relationship with technology stands out.

“People who were born in the ’80s use the internet for shopping but they also care about the real shopping experience so they normally go back to check the real item in the real store in order to check the offline price and that is a very linear purchase process,” Goro Hokari, executive regional strategic planning director at HILL-Asean, told Asia Focus.

While people who were born in the ’90s care about how they buy — and online purchasing is as natural as breathing for many — they also care about the post-purchase experience because they want their social world to be real. “They like to post authentic reviews about the product because in the social world there are fake reviews everywhere and they want to put authenticity back into the virtual world,” said Mr Hokari.

Eighties people use technology to be more careful about what they buy more than their ’90s counterparts because they remember what it was like to be struggling financially. Many were in high school when the Asian financial crisis of the late 1990s affected millions of families. 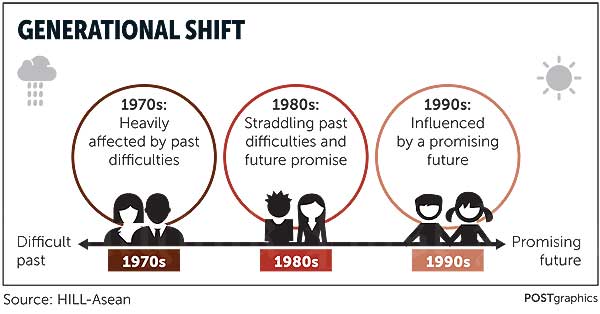 The survey by HILL-Asean shows that the ’80s group has been affected by difficulties in the past and holds out hope for the future, while those born in the ’90s respond primarily to current events and those that indicate future promise.

“When we asked what historical events most affected their lifestyles, those born in the 1980s cited the Asian financial crisis which occurred when they were in their teens,” said Mr Hokari.

“For the 1990s-born, however, the arrival of Facebook and smartphones seems to have had a bigger impact.”

The Asian financial crisis was high on the list of influences of both the 1980s and 1990s-born in Indonesia and Thailand, which is not a surprise given that the two countries were the biggest casualties of the meltdown that began in Thailand in 1997. In Indonesia, the overthrow of the Suharto dictatorship in 1998 was another watershed moment.

The parents of many young people who came of age in the 1990s either lost their jobs and wealth or had to leave their families behind to seek work elsewhere or even relocated the whole family to cut expenses. Vivid memories of financial hardship have made this group more careful about how they spend their money.

Besides indirect experience of economic crisis and political upheaval, the ’80s group sees new technology such as social media and the smartphone offering hope for the future.

“The effect from the historical context means that the 1980s-born tend to use multiple facets of their personalities to create more meaning in their professional and personal lives, such as having a separate home, thinking that it’s important to separate personal time and family time, or opening a cafe as an extension of their hobbies,” said Ampa Theerapatsakul, strategic planning director at HILL-Asean.

Those born in the ’90s are more influenced by technology than the 1997 financial crisis, which they were too young to remember. Because they take technology for granted and do not marvel at its power the way older people do, they tend to look at future events that will shape their potential, such as the expanded possibilities from digitisation and globalisation.

The ’90s cohort do not make a distinction between their professional and personal lives and they do not like to live by other people’s rules. They want to express themselves while making a living by doing what they want, with less concern about financial security.

That seems be true for some millennials Asia Focus talked to at the HILL-Asean forum in Bangkok. One born in the ’90s in Bangkok quit her job to open her own shaved-ice stand while another from Kuala Lumpur has set up her own e-commerce business to sell sweets online.

Roy Gori, president and CEO of Manulife Asia, said Asia’s millennials are naturally optimistic about their retirement as many will have grown up in an era of unprecedented economic development.

“With that prosperity comes a longer and better quality of life — and with that, higher expectations for the future,” he added

Ms Ampa said those born in the ’90s tend to view opportunities over risks. They think limitless opportunities are available for them via e-commerce and globalisation, and that doing nothing is the biggest risk of all. 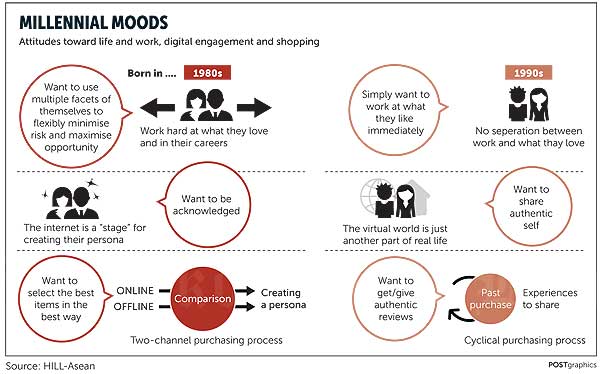 Mr Hokari said the impact of social media and smartphones on those born in the 1990s is seemingly stronger than on those born in the 1980s, who were in their twenties when they first logged in to Facebook or got their first smartphone. Because they entered the virtual world as adults, they believe the internet is a stage for creating their persona to establish their real-world lives, he said.

HILL-Asean believes that the ’80s generation draws a distinction between the real and virtual worlds, where they see the virtual world as a place to freely build their own personal image, such as posting carefully curated and well-considered photos that only show them at their best.

Examples are people who try to photograph their food to make it look the most appetising, or posting a photo before, during and after running a marathon — but even these will be carefully chosen to be flattering.

The ’80s millennials believe that how others see them is important so they tend to tag friends in photos to get more likes, or to seek likes for photos of their children. Composition, meanwhile, is the key to perfect swimsuit photos.

For those born in the 1990s, the virtual world is part of real life and they make no distinction between the two, noted Ms Ampa.

The ’90s group often display themselves as who they really are without putting much effort into making the perfect photo. Pictures of themselves making funny faces or wearing no makeup are par for the course.

Ms Ampa said this group tends to share emotions via indirect communication such as tweeting and posting on Facebook to boyfriends and girlfriends when one forgets an anniversary, or posting a saying or quote that only specific people would understand.

They also like to share moments such as posting videos of themselves while on vacation, while selfies are a must.

“They have a strong desire to share their authentic selves through real emotions and real moments while being digital natives means that they see the virtual world as another part of the real world,” she said. “They also believe that they can learn anything from the internet.”

Different historical contexts and ways of interacting with technology have led the 1980s and 1990s-born to shop differently. HILL-Asean consequently recommends that companies pay attention to these details to better understand customer behaviour.

The ’80s group tends to make buying decisions based on how items contribute to creating their personal image, such as buying a drone to make you look more tech-savvy, or a wearable device to show others that you’re exercising.

These older millennials also make full use of both online and offline channels to make thorough comparisons of items that suit them and at the right price, Ms Ampa elaborated.

Meanwhile, the ’90s group generally make buying decisions instantly because there is little purchase risk and they purchase things that will support them or create new experiences to share online.

They do compare products in the same way as their ’80s peers did but the difference is that they also tend to keep collecting information on brands they like after a purchase and review them for their friends and family.

HILL-Asean says brands need to engage with the 1980s-born generation to enable them to present their best selves in the best light.

“They want their brands to be stage producers. You have to stimulate them to get closer to the selves they want to project because they want to be accepted for all facets of themselves,” Ms Ampa said.

This group needs time in the spotlight so brands that want to reach them should provide “stages” where anyone can be the main character.

Brands also need a character-based approach where they provide structures and options that allow the 1980s-born to make the choices that help them become their ideal persona, such as providing an online tool that allows them to analyse an ideal persona while suggesting products based on the results.

They also like to make themselves exceptional and to be acknowledged, so giving them a certificate as loyal users or inviting them to events will certainly get their attention.

Meanwhile, the 1990s-born generation wants brands that are always by their side, complement their feelings while allowing them to be themselves. The theme here should be “anytime, anyplace”, allowing this group to engage in interactive communication whenever they want and wherever they are.

This includes giving them real-time responses on social media and real-time communication to complement this group’s mood of the moment by analysing social media posts for retargeting use.

Brands that want to attract those born in the ’90s should also offer products and services that support the maximisation of authentic self-expression, such as helping them engage in activities that older generations won’t understand. A competition for the best selfies with a product is one such example.

“This group wants brands to be their honest buddy, so you have to allow them to show themselves as they really are because they want to make their ideals a reality in an expanding world,” said Ms Ampa.

“The 1980s and 1990s [groups] cannot easily be lumped together as a single millennial generation so brands require different approaches to cater and serve them.”