Civic groups and academics attend a seminar on EIA/EHIA public review, a mandatory process for any state projects that may impact the environment of the community. (Photos by Seksan Rojjanametakun)

The studies will take two years to complete and cause further delays in developing the facilities, said Egat governor Kornsit Pakchotanon.

Prime Minister Prayut Chan-o-cha scrapped the previous EHIA earlier this month and ordered Egat to conduct a new one with greater input from nearby communities.

Mr Kornsit said Egat plans to hire a different consulting firm to conduct the latest impact assessments for the 800-megawatt power plant and the deep-sea port, to be located near the plant in the coastal province.

Bidding to conduct the assessments will be opened soon, he said.

After the new EHIA and EIA are completed, construction will start around 2024, several years later than the previous 2021 deadline.

The plans were announced a day after Egat moved to silence environmental activists with a criminal defamation lawsuit against 15 people.

Egat used the Computer Crime Act, claiming in the suit that the 15 had posted online material that Egat's power plants are sources of pollution which can cause sicknesses and death, and that Egat wants to build coal-fired power plants without regard for the people's health.

The move was seen as an attempt to mute critics of the plans to put a coal-fired power plant on the Krabi beach.

Before that, senior officials from the Energy Ministry and Egat flew reporters to Japan to see a so-called "clean coal" in use at the Matsuura thermal power station in Nagasaki Prefecture. They said the Japanese operation proved successful coexistence of the power plant and the environment. 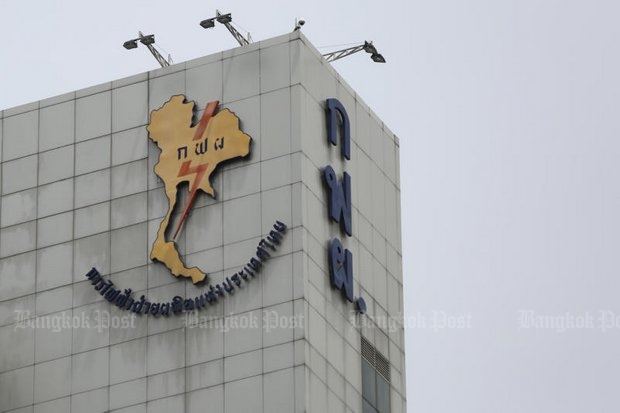 Egat headquarters in Bangkok. The electricity provider is moving on several fronts in its plans to build a coal-fired power plant on the Krabi province beaches.

Mr Kornsit said that while there have been some concerns and requests from protesters and the opposition to switch from coal to gas, the change would not be easy to make.

He said if the policymakers eventually decided on gas over coal, Egat would need to develop not only a new power plant in the province, but also a gas pipeline, gas receiving terminal and floating gas storage unit - at a significant cost.

Mr Kornsit said there are no new gas fields in the Andaman Sea, while Thailand’s gas supply in the Gulf of Thailand is depleting sharply, making the country even more reliant on imported gas.

Moreover, the facilities for the gas-fired power plant, including the gas pipeline, would cause more damage to the marine ecosystem than the coal-fired plant, he said.

Regarding development of another 2,000MW coal-fired power plant, expected to be built in Thepa district in Songkhla province, he said operations are likely to be delayed to 2023, pushed back from 2022, as the land expropriation process has lagged.

In order to seek ways to prevent possible blackouts and power shortages in the southern region due to delays of the planned coal-fired power plants, Egat is running a project to extend high-voltage power transmission lines from the Thailand’s Central Plains or Malaysia, in the event the country needs to buy more power from its southern neighbour. The extension would transmit 700MW of power to the southern region.