The state's research agency and energy policymakers have finally discovered a way to produce biofuel from cassava at a competitive cost, says a senior Energy Ministry official. 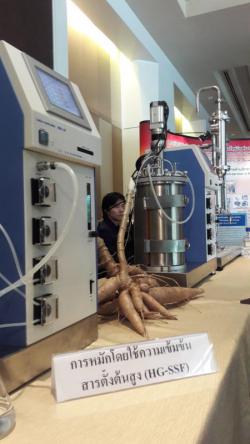 A researcher works at a pilot plant for producing cassava-based ethanol designed by Thailand Institute of Science and Technological Research.

Previously the use of cassava in ethanol production was not viable despite the abundance of the shrub, because the production costs were far higher than those for fuel derived from molasses, the by-product of refining sugarcane into sugar.

After 18 months of research and experiments, the Thailand Institute of Science and Technological Research (TISTR) has found that they can use a species of yeast named Saccharomyces Cerevisiae in the cassava fermentation process, resulting in ethanol with a far lower per unit cost.

The yeast is well suited to ethanol production as it is highly resistant to high temperatures and can grow with the high content of sugar and alcohol during the fermentation process.

"Due to the quality of the yeast, we can use it in cassava-based ethanol production, resulting in ethanol with a quality and cost on par with that from molasses," said Praphon Wongtharua, director-general for the Department of Alternative Energy Development and Efficiency (DEDE).

Employing the yeast can lower the production cost of cassava-based ethanol by 80 satang per litre or almost 4% from 21.5 baht a litre to 20.7.

"We are excited by the new discovery as it will not only give us more choices in using green fuels. What's more, it will also help reduce the burden for farmers when cassava prices decline due to output gluts," said Mr Praphon.

The DEDE has supported the TISTR financially in a bid to find the new fuel options for the country.

The research budget is undisclosed.

The TISTR has also designed a new cassava-based ethanol production process to serve its future plans to push the research to become commercially viable.

Currently, the TISTR is operating a small pilot plant in Rangsit, Pathum Thani.

Thailand's total ethanol production as of the end of 2016 was 4.7 million litres per day, made by 21 producers across the country. Of the producers, 33% uses feed stock from cassava and the rest use molasses or sugar cane juice.

He said that the next TISTR mission is to find other species of yeast that can be used in the cassava-based ethanol production with similar or better outcomes, as a substitute should be prepared.

In tandem with the yeast species breakthrough, they are also conducting research to boost productivity in the industry.

After the first stage of development is completed, the DEDE is hoping it will find new investors, including existing ethanol producers, who can help commercialise forthcoming TISTR innovations.

"We are very optimistic about the future as existing operators can invest in this scheme to upgrade their productivity and cost efficiency. There are also two ethanol plants under construction, and their owners might be interested in investing in this technology," said Mr Praphon.

The DEDE will continue in its research and development efforts for alternative fuels and renewable energy even though consumption has grown more slowly than expected since crude prices began falling in 2014.

For example, an ethanol promotion plan that was intended to phase out gasohol 91 by Jan 1 next year never got off the ground.

Thailand's National Alternative Energy Development Plan 2015 has set its ethanol consumption target in 2022 at 9 million litres per day, and to 11.3 million litres in 2036.