Innovation at the core of a drive to ensure that quality manufacturing and tech industries can continue to compete globally.

With a total population of less than 24 million, Taiwan is known for its diversified manufacturing sector ranging from high-tech industries such as electronics and IT, to home appliances and bicycles. Companies such as Asus, Delta Electronics, Tatung and Giant have made their mark in the international market as leading brands from Taiwan.

But given price competition from China-made products and a slowdown in the global economy as well as demand in certain sectors such as personal computers (PC), Taiwan has seen a need to sharpen the competitiveness of its manufacturing sector and broaden export markets. Innovation, say high-ranking officials and business executives, is the key for Taiwanese industries to thrive and generate more export revenue in the years to come.

"Taiwan is competitive. All we need is more innovation, new technology and new designs to promote our products in new markets," said Water Yeh, president and CEO of the Taiwan External Trade Development Council (Taitra). "In the past, we competed on price but now we have to upgrade. Of course, price is still important in some products but it's not the main reason for competition. You have to be innovative, to be unique with product differentiation."

Founded in 1970, Taitra has 60 overseas offices. According to Mr Yeh, 80% of the country's exports are parts and components. Exports contracted for the first time in 2016, sliding 1% from the year before to US$280.4 billion, but shipments have picked up this year.

China's dominance as an export destination reflects the fact that many Taiwanese companies have manufacturing operations there.

Taiwanese brands are building on their strong reputation to penetrate deeper into the consumer market, executives say. 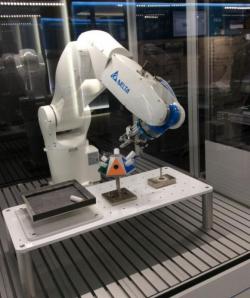 Delta Electronics, which has a major presence in Thailand, is among the Taiwanese companies that have made their mark in the international market. Photo: Nareerat Wiriyapong

"Taiwanese companies have gone from a focus on supplying key components to a greater focus on the end-users. We can see that with the emergence of products specifically designed to help the elderly," he said.

"The Asian Silicon Valley is the goal Taiwan wants to achieve," Mr Yeh told Asia Focus. "Taiwan has many startups and they are important in our innovation. So we help to promote them with financial support and finding partners."

At the same time, Taiwan needs new export markets. It has identified 18 important markets including Asean and South Asian countries such as India, Bangladesh and Pakistan.

"Apart from Asean, India is the important market. They have a big growth rate. Australia is also our market," said Mr Yeh, adding that Indonesia, Thailand, the Philippines, Vietnam and Malaysia are also targets.

For established Taiwanese brands, like Asustek Computer, new products will be the key to continued growth. The country's leading PC maker, better known by its trade name Asus, is now placing more emphasis on PC gaming through its Republic of Gamers (ROG) brand.

According to the research firm IDC, Asustek overtook Apple as the No.4 brand in the global PC market in 2016 behind Lenovo, HP and Dell. However, IDC data showed that global PC shipments fell 5.7% to 260 million units in that year.

"The notebook industry will continue to deteriorate, but we are hoping we will do better than the industry average," CEO Jerry Chen said.

Derek Yu, global marketing director of Asus ROG, said the games market holds high potential, with a forecast value of $106.5 billion this year, which is projected to reach $120 billion in two years.

"Despite the slowdown of the PC market, the gaming category is expected to grow and with greater profit," he told a group of Asian and European journalists on a Taitra-sponsored trip in Taiwan.

According to Newzoo, a market intelligence provider specialising in games, e-sports and mobile markets, gamers worldwide generated revenue of $99.6 billion in 2016, up 8.5% from a year earlier. Asia Pacific had a 47% share, a 10.7% increase, with China alone accounting for half of the region's revenue, as the largest games market in the world ahead of the US.

"Gaming devices might still be niche, but gamers are not," said Mr Yu. "The most popular games like Overwatch, for example, last year hit 20 million registered users while League of Legends has 50-100 million users. These are more than enough to justify the potential of the segment."

"E-sports is an ideal platform appealing to younger millennials who are active in the social space," said Mr Yu. "Research shows them as technology-conscious and brand-conscious and they have tremendous purchasing power, more than PC consumers in general."

Asus offers a complete product line for gaming with 10 product categories under the ROG brand.

"We have a bunch of products in Southeast Asia and in most of these countries we are number one. In total, Asus has a bit over a 30% share as the market leader in the world in gaming. In e-sport, we were there first and we continue to dominate the market," he said.

"We will continue to invest in the future gaming landscape. We want to bring in more mainstream gamers."

Jackie Chen, marketing manager at Tt eSports by Thermaltake, said all Taiwanese PC vendors including Asus, Acer and Micro-Star International (MSI), along with their Singaporean counterpart Razer, were now in the global gaming market which is expected to expand at 6.6% a year.

"Gaming is social. Everyone plays online and competes with others," he said.

According to Thermaltake, a leading brand in the PC DIY market, demand for DIY gaming accessories is growing as more users want to show their personal style.

"End-users and gamers are focusing on uniqueness and personal nature. They try to make their gaming keyboards and cases with their own sense of beauty, artistic taste and creativity," she said.

"Every morning we wake up, we check our mobile phone. We want to show ourselves, our lives, where we have been, what our computers look like, and we do Facebook or You Tube. [Gamers] want to show their professionalism to their fans and to the public."

"We also have gaming chairs now being introduced to markets worldwide," she added.

Amid intense price competition from Chinese products, Taiwanese brands are moving rapidly into solutions customised for end-users. Vivotek, an internet protocol (IP) surveillance specialist, for instance, is up against strong Chinese rivals in Southeast Asia.

"We have had some good results in Thailand and Indonesia. We are also making good progress in Vietnam and are currently looking at Malaysia and other markets," chairman Owen Chen said.

"[But] the Philippines is quite tough as we are competing with Chinese competitors. In Singapore, we're doing better after losing many projects in the past three years to Chinese companies. They dealt directly with the government."

Vivotek has 183 distributors in 116 countries. The US accounts for 40% of sales, with Europe, the Middle East and Africa contributing 45% and the rest coming from Asia.

"India is growing a lot this year and a very good market while Asean is among our focus areas," said Mr Chen. "We think we can duplicate the success model in the US and Europe to this market. The timing is right for us to be in this region as the economy is picking up."

"The smart city is a very hot topic in many countries and we are working with several partners to be engaged in smart city projects," said Mr Chen.

He said the company tried not to compete directly with Chinese firms but rather to provide products with different features and more value added.

"In the past, [IP surveillance products were] pretty much used for preventing something from happening, but in the future, IoT offers a different aspect. In addition to preventing bad things from happening, we will be more proactive because cameras can capture more information," he said.

"For example, we had an inquiry from a customer about whether you can judge whether someone is a bad guy. They say you can judge from the way he walks. Maybe 10 years from now, we can do that as the technology heads that way."

Chmer, Taiwan's leading manufacturer and exporter of electrical discharge machining (EDM), says that upgrading education and more investments in research and development (R&D) are needed for Taiwanese companies to be more competitive.

Thankfully, the manufacturing sector in Taichung City where Chmer is located has inherited technology and manufacturing traditions from Japan, which ruled Taiwan from 1895 to 1945. That has enabled companies like Chmer to upgrade production and export widely. It is the fifth largest machine tool exporter globally.

Thailand was the company's first export market, he said, adding that China was the biggest market accounting for 65% of all shipments. In Asean, Indonesia is the largest market for Chmer now.

"We are making the cost more economical. In this area (Taichung), every manufacturer is putting efforts into achieving this goal," said Mr Wang. "Asia is very close to Taiwan. Maintenance will be easy and we are using this advantage to reach out to more Asian markets."