RAdm Worapol says U-tapao's new terminal will start commercial operation in August, but even before its opening, an even larger terminal is being mulled by the government as part of plans to create an air hub on the eastern coast. Photos by Boonsong Kositchotethana

Even as its 1.7-billion-baht expansion, including a new terminal, is yet to be up and running, there is a grander, more ambitious development awaiting U-tapao airport.

A second runway and an even newer, larger passenger terminal are being mulled by the government as part of plans to create an air hub on the eastern coast, along with Suvarnabhumi and Don Mueang airports, serving Bangkok.

The next-phase development will go alongside a target to use it as a springboard to spur extensive aviation-related industries under the government's much-touted Eastern Economic Corridor (EEC) scheme.

This month, the newly created U-tapao Airport Authority (UAA), which was set up to run the airport, will commission a Los Angeles-based airport consultancy to draw up a master plan for the U-tapao development scheme. 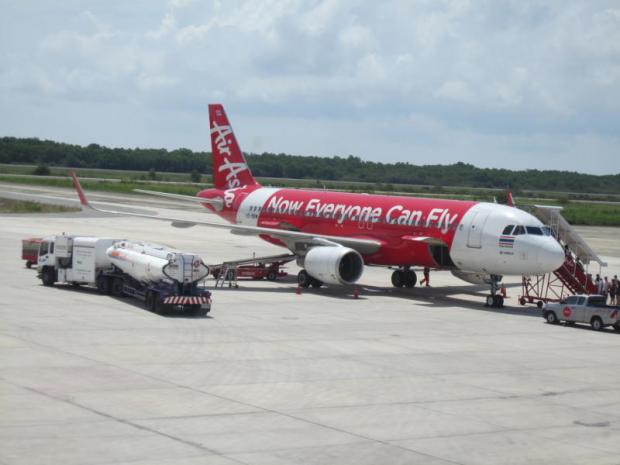 Thai AirAsia's A320 sits on the apron built as part of the current 1.7-billion-baht expansion, which includes a new terminal with a floor space of 20,000 square metres.

Taking about a year to complete, the master plan will not only cover U-tapao airport's future development, but also other areas, including the creation of aviation-related industries and operations such as aircraft maintenance, repair and overhaul facilities, air logistics hubs and an aviation personnel development centre.

Specifically for the airport, the master plan will help formulate plans for the second runway and a new passenger terminal, in addition to the second terminal set to be opened this year.

UAA director Worapol Tongpricha said a second runway, running parallel at a distance of 1.3 kilometres from the existing runway, could be built first.

The new runway would be the same size, 3,500 metres in length and 60 metres in width, and is estimated to cost 8 billion baht. 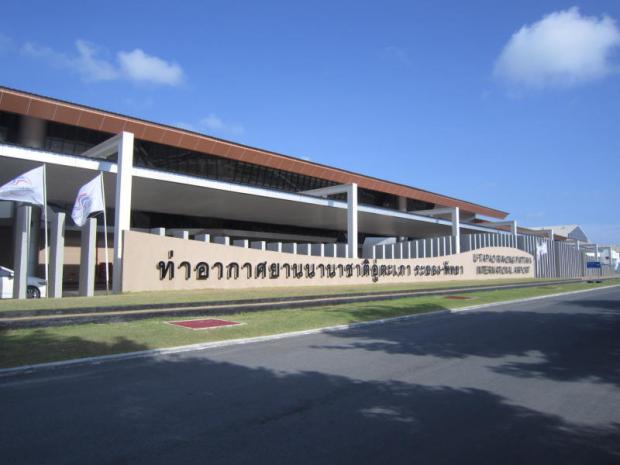 The front of U-tapao airport's new terminal, which is built next to the current one.

A new terminal capable of handling 15 million passengers a year may come later, with the timing aimed to match passenger traffic growth projections made by experts.

RAdm Worapol said the appropriate timing for establishing what would be the third passenger terminal building is a tricky one.

UAA's own projection envisions passenger traffic through U-tapao rising 10-12% annually rather than a leapfrog growth.

That means it may take 10 years from now before the new passenger terminal, now 80% complete, would reach its annual capacity of 3 million passengers, he said.

The new, second terminal, built next to the current one, is scheduled to be fully operational in August this year, after some delays.

UAA expects the number of passengers passing through the airport, located in the Navy zone in Rayong, to reach 1.2 million this year, from 710,000 last year and a meagre 170,000 the year before.

U-tapao's current runway, which is shared by commercial and military/government flights, only uses 40% of its capacity, according to the UAA chief.

But RAdm Worapol said that because the government of Prime Minister Prayut Chan-o-cha has set its sights firmly on seeing U-tapao become a new centre driving the EEC, the next U-tapao developmental phase could be expedited.

If the EEC can actually take off in the next five years, it may change the picture for U-tapao , he said.

Some directives related to the development of the aviation industry in relation to U-tapao could come out from the EEC policy board meeting, which will take place on April 5 at the airport and be chaired by Gen Prayut.

A total of 6,500 rai of land in the Navy-reserved area in Rayong has been set aside for aviation-related industries, including an aircraft maintenance, repair and overhaul centre, which Thai Airways International and European plane maker Airbus have agreed in principle to pursue.

When the new passenger terminal is opened, the age-old terminal with 3,000 square metres of floor space will be transformed into an office for airlines and general aviation companies.

UAA decided to consolidate both domestic and international passenger movements under one roof at the new terminal due to its ample capacity, he said.

Now pending at the new terminal, which commands a floor space of 20,000 sq m, is the installation of IT systems, the delivery of two aerobridges, some fine-tuning for things already in place and finishing touches on the commercial area by concessionaires.

But while the government has called U-tapao "Thailand's third air hub," the UAA chief said there would be no competition between U-tapao, Suvarnabhumi and Don Mueang, with the last two also undergoing expansions.

"The three of us will grow together,'' he said.

NAKHON RATCHASIMA: A provincial committee on Sunday agreed to increase the amount of assistance money for families of innocent victims killed or left with permanent disability in the Feb 8-9 shooting rampage from 1 to 2 million baht each.

US evacuates citizens from virus-hit cruise ship in Japan as fears grow over spread of disease, death toll at Chinese epicentre tops 1,700.