South Korea's Lotte Duty Free is making a footprint in Thailand with its first duty-free shop, scheduled to open at Show DC mall on Rama IX Road in July. 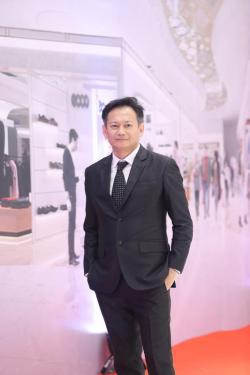 Mr Sanga is confident that Lotte Duty Free Thailand can compete with King Power because of the brand loyalty of its Korean products.

Although it is new to the Thai duty-free market, the Korean player vows to compete with King Power, the country's dominant operator, by using its iconic Korean cosmetics to draw customers. It expects to generate 50 million baht of revenue this year.

The shop already has Thai products in stock, while imported goods have been ordered. The imported products are expected to be delivered to the shop within two months.

The new shop will offer more than 20,000 products from over 100 international brands, mostly from South Korea.

Mr Sanga expects more than 1,000 visitors to the shop a day, with 80% foreigners. Of the foreigners, 90% are expected to be Chinese as they are major spenders at duty-free shops in Thailand.

Lotte Thailand estimates its shoppers will spend about 4,000 baht per person per visit.

He is confident the company can compete with Thai duty-free shops, especially King Power, thanks to its strength in Korean cosmetics brands. Chinese travellers, its major target, like to buy Asian cosmetics more than European brands.

Another advantage for Lotte Duty Free is its entertainment marketing strategy, which appeals to those who love Korean artists.

"Our competitive edge is the strong brand of Lotte as well as those of Korean cosmetics," said Mr Sanga.

Lotte Thailand is the company's sixth operation outside South Korea and the biggest in Southeast Asia as Thailand is a tourism hub for the region.

"We're certain the opening of a Lotte duty-free shop in Bangkok will help promote the growth of the Thai economy as well as of tourism by leaps and bounds," he said.

Lotte has duty-free shops at airports in Singapore and Indonesia, but the Thai shop is the first in a mall.

Mr Sanga said Lotte chose Show DC because the mall is convenient for shoppers as it is located 30 minutes from both Suvarnabhumi and Don Mueang airports.

After the shop opens in July, Lotte plans to operate duty-free pick-up counters at both Suvarnabhumi and Don Mueang airports in the near future.

Rawittha Pongnuchit, president of the Thai Duty Free Shop Trade Association, said new pick-up counters at airports should materialise soon after the government finalises its policy to liberalise the duty-free business by having more players to create competition.

The Office of the Ombudsman has concluded Airports of Thailand must not allow only one duty-free player to establish pick-up counters at its airports.

Other operators should have opportunities to manage pick-up counters at its airports, said the office.

PAPEETE: French President Emmanuel Macron faced pressure to apologise for the devastating impact of decades of nuclear testing as he kicked off his first official trip to French Polynesia.