The rise of e-commerce is taking a toll on bricks-and-mortar retailing in some markets, but new approaches to creating shopping experiences offer hope

With e-commerce being fitted into their arsenals, retailers are now aiming to provide new experiences and greater convenience for shoppers. And while bricks-and-mortar stores will continue to exist, they are no longer places exclusively for shopping, but also must function as showrooms and fitting rooms.

Many modern shoppers now pick what they want online, search for the best price, find a time slot, choose how they want to pay, and wait for the item to be delivered to their home. However, many consumers still prefer the experience of physical stores, which are developing new attractions to keep customers coming back.

"Today's consumer no longer goes shopping, but is shopping, all the time and everywhere," said Willy Kruh, global chair of consumer markets at KPMG International. 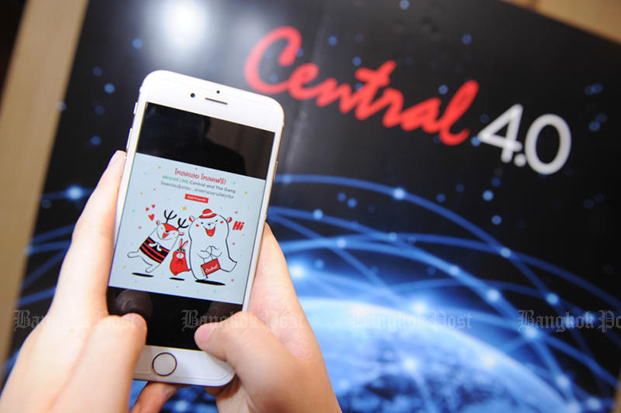 With its new Central 4.0 concept, Thailand’s biggest retail group is aiming to provide a seamless online experience for shoppers inside its stores and anywhere else they may be. (Bangkok Post file photo)

"Nevertheless, despite the rise of online shopping, e-commerce still makes up a relatively small percentage of total retail spending."

According to a report by eMarketer, worldwide retail sales totalled US$22 trillion in 2016, of which only 8.6% or $1.9 trillion was retail e-commerce. By 2020, total retail sales are expected to reach $27 trillion, with e-commerce accounting for 14.8% or $4 trillion.

Among those adapting to the new reality is Central Group, Thailand's largest operator of department stores and shopping malls. Its new "Store as a Theatre" concept combines innovation and technology to offer customers more fun while shopping at Central department stores.

"Consumers nowadays no longer want only the products but they also want new experiences that are current or ahead of the trend. They also want convenience, promptness, support and responsiveness to personalised needs," said Piyawan Leelasompop, vice-president of marketing at Central Group.

Retailers in Asia are keeping a close watch on their peers in North America, where e-commerce has eaten into the revenues of many big chains, to the point where some household names have started to close stores by the dozen. The "hollowing out" of shopping malls is another trend being observed in the United States.

"This is not a cyclical issue," said Jason Mudrick, whose $1.6-billion Mudrick Capital Management specialises in distressed investments. "It is secular issue, a forever trend. This is the Amazon effect and it is here forever."

In 2015 alone, about 6,400 shopping malls closed in the United States. American Apparel, which had $633 million in sales and more than 200 stores in 20 countries in 2013, is now bankrupt and was sold to Gildan, a Canadian apparel company, for $103 million in January this year. Rue21, an American retailer to young men and women with 1,194 locations in 48 states, this month announced plans to close 400 stores. Also struggling are American Eagle, Abercrombie & Fitch and Aeropostale.

JC Penney, Macy's and Sears are also turning off the lights in malls across the US as they adjust to changing tastes and the shift to online spending. Macy's plans to close 68 stores, resulting in 10,000 job losses. JC Penney shrank from 1,104 stores in 2012 to 1,013 at the end of 2016. It plans to close another 138 locations this year.

Retailers in the US cut 30,000 jobs in February alone, industry figures showed.

A similar level of technological disruption is on its way to Southeast Asia but some of the region's retailers are still unaware of the looming threat, says Anson Bailey, leader of consumer markets in Asia Pacific at KPMG in Hong Kong.

"There is a chance that we will see the fall of these traditional players," he said, although some will manage to successfully "pivot and do things differently" such as adopting an online-to-offline (O2O) strategy and collaborating with new partners.

"Bricks and mortar is not going to die because consumers still want to go to the store to touch and feel the products. Millennials don't shop like the older generations but they still treasure that experience and even the e-commerce players are now setting up physical flagships and pop-up stores to gain trust," he told Asia Focus.

Mr Kruh agreed, saying: "E-commerce is not an online-only affair. Both online and offline channels are effective in creating consumer awareness and demand, especially when used together."

Retailers across Asia are now trying different strategies to survive. E-Mart Inc, South Korea's largest retailer, last month started streamlining its physical outlets for the first time in 24 years. It will sell money-losing outlets but is also scouting locations for new stores that will perform better.

Intime will benefit from the inventory control system developed by Alibaba and its direct purchase channels with manufacturers. This will cut out middlemen and allow Intime to reduce prices to match online competitors.

Central Group, meanwhile, is adopting a two-pronged strategy focusing on both offline and omni-channel. Its Central 4.0 concept aims to provide a 24-hour seamless online experience for shoppers by concentrating on in-house online shopping and the digitisation of its stores.

"We can no longer just sell products," said Ms Piyawan. "Central has to sell experiences that cannot be bought online. We have to be malls that people come to live their lives and not just a place to buy things."

The company is introducing iPads to sales staff to help them overcome the language barrier they have with tourists. It is also revamping some stores to combine what customers like into more personalised zones.

For example, manicure and hairdressing services will now be located in the women's section, while in home furnishings, shoppers will have access to sewing machines to stitch names onto pillowcases and bedsheets.

In the children's department, youngsters will be able to play with toys before their parents buy, and floors are being fitted with more child-friendly materials. Every second Saturday is now Central's Children Day to provide activities as a reason for parents to bring their children to the stores.

Central last year spent 100 million baht to give its website a more user-friendly interface. It is planning to increase the number of online products from the current 100,000 or so to 500,000 in the next five years.

The company so far has refurbished two stores in Bangkok -- at Central Plaza Bangna and Central Plaza Pinklao -- and has set aside another 3-4 billion baht to add a Central department store in Korat and to renovate CentralPlaza Rama III in Bangkok.

But no matter how attractive department stores are, they are drawing an increasing number of people for "showrooming" -- examining and taking pictures of products that they will eventually buy online. This may sound like bad news for bricks-and-mortar stores but there is an encouraging flipside called "webrooming" -- doing research and checking prices online before going to a store to buy a product.

Despite all the volatility in the retail market, the good news is that the long-term prognosis for Asia is still very positive. The Economist notes that in 2005, household consumption in Asia was $7 trillion but is expected to balloon to $33 trillion by 2030. That figure would be equal to the combined total projected for the US and the European Union.

"I have no plan to move back to Manchester because Asia is where we are going to see the growth," said Mr Bailey of KPMG in Hong Kong.

China is currently leading the way in online spending with 48% of mainland consumers buying things online, followed by 40% of other Asians, well above the 27.9% global average, so the prospects for e-commerce in the region remain bright.

The middle class in China is also increasing very quickly. The number of high net-worth individuals (people with assets exceeding 10 million yuan or US$1.45 million) is currently around 1.4 million -- about four times what it was in 2010.

"Consumers are looking for something beyond the shopping experience and as retailers or as landlords, you have to think about how you can develop a new experience for your consumer."