A crewman from a southern tour boat has been fined 500 baht for taking starfish and sea cucumbers from the sea so that tourists on board could take photographs of them. 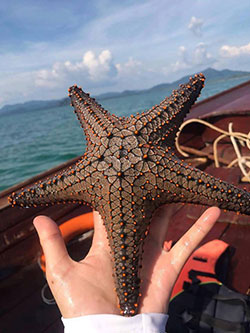 A tourist on a Chokwimol Tour boat holds a starfish in a photograph that she later posted on her Facebook page.

Aekkawat Hassakhon was summoned to Chao Mai National Park in Kantang district in Trang on Friday after park officials learned of the incident. Their investigation found that he had dived into the Andaman Sea to catch four starfish and four sea cucumbers for a group of tourists from Ratchaburi to photograph before releasing them back to the water.

Park chief Manote Wongsureerat said Mr Aekkawat, who works on a Chokwimol Tour boat, violated park rules by putting marine life in danger and the park fined him 500 baht, with a warning not to repeat the offence.

The Nakhon Si Thammarat office of the National Park, Wildlife and Plant Conservation Department ordered the park to take action after a tourist from the group took pictures with starfish on the boat and later posted them on Facebook on Thursday.

The tourist later removed the photos after receiving criticism that marine life had been put in danger and should not be used for pleasure. She later apologised to her ignorance.