The world's most widely used vegetable oil has been the poster child for environmental devastation, but campaigns to improve practices are starting to bear fruit

2016 will be remembered as the year of clear blue skies and clean air in the southern peninsula of Southeast Asia. For the first time in nearly two decades, choking haze from fires set to clear land for oil palm plantations was reduced significantly, in keeping with a promise made by Indonesian President Joko Widodo. 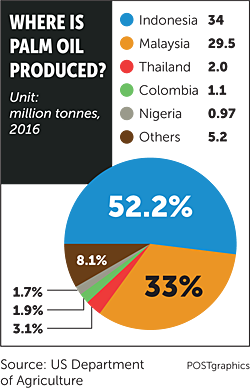 But Simon Tay, chairman of the Singapore Institute of International Affairs (SIIA), is not overly optimistic that clear skies will continue to prevail.

"While the situation in 2016 was good, the bad news is that clear blue skies are not guaranteed. Climatologists already predict drier weather from El Nino. So we need a long-term holistic solution. Without pulling together, the haze will return."

Mr Tay issued his warning in the opening speech of the fourth Singapore Dialogue on Sustainable World Resources (SDSWR) held in Singapore last month. Funded by SIIS, the forum is dedicated to the promotion of a sustainable supply chain in the palm oil industry.

Mr Tay, also an associate professor with the faculty of law at National University of Singapore (NUS), has been working tirelessly for two decades on efforts to help solve haze pollution. In keeping with Singapore's aspirations to become the hub for a sustainable supply chain in agricultural products, last month's forum brought together about 300 participants from across the value chain of the palm oil industry. Their aim was to share ideas and build a network of cooperation to upgrade the notoriously polluting industry and make it more socially and environmentally responsible and sustainable. 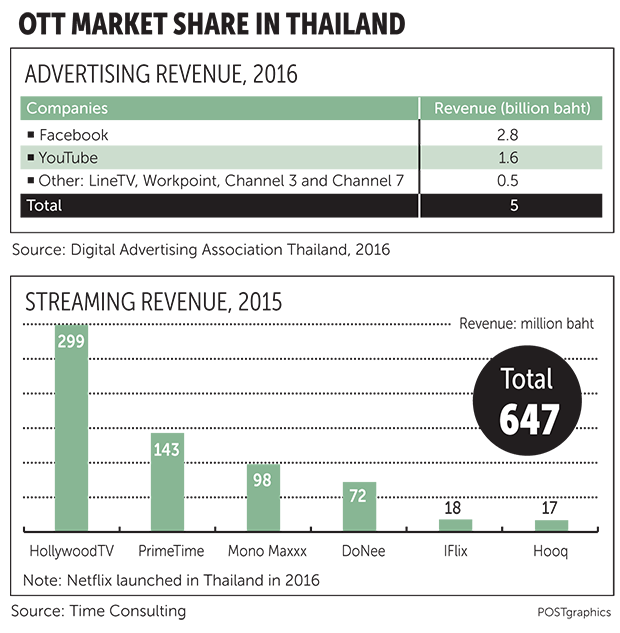 Singapore has no oil-palm plantations, of course, but it plays big role in the downstream palm oil trading and financing of the industry. Olam International and Wilmar International, two of the world's biggest palm oil traders, are based and registered in the city-state. Temasek Holdings, the state investment fund, as well as major Singapore banks DBS, UOB and OCBC are also involved in palm oil investment.

"The deep challenge for Singapore is that we have to recognise our responsibility as a hub, through the link and facility we have in terms of trade and finance," said Mr Tay. "We are looking forward to merge financial instruments with sustainability."

In this regard, the SIIA is collaborating with the United Nations Environmental Initiatives to draft guidelines for local banks in financing the palm oil business.

However, agricultural practices remain the most visible and controversial aspect of palm oil, which is the most widely used vegetable in the world, found in thousands of products from sweets to soap.

For almost two decades, haze from fires set to clear land for oil palm planting in Indonesia has been a major contributor to seasonal pollution, affecting Malaysia, Singapore, southern Thailand and even Vietnam.

Yet, the haze is a result of more complex factors including the politics of land management and violations of land tenure rights of indigenous people. Corruption, weak law enforcement and the lack of transparency surrounding the supply chain in the plantation sector hold back efforts by companies, civil society and authorities to "green" the palm oil supply chain.

Many in the palm oil industry are sensitive to the criticism and they ask why other large-scale agricultural ventures in the region do not receive similar scrutiny. For example, corn planting in northern Thailand has also led to massive deforestation. Sugarcane plantations in Thailand and Cambodia also contribute to environmental devastation from fires set at harvest time. As well, Thai investors in Cambodia have been accused of doing nothing to prevent forced evictions of local communities by state authorities from land earmarked for large-scale sugarcane planting.

The most notorious aspect of the palm oil industry is the expansion of cultivation to peat land, known as wetland -- a source of biodiversity but also a major storage point for carbon emissions. Wetlands International, the Netherlands-based conservation group, says that 20% of oil palm planting, especially in Indonesia, takes place on peat soil, which used to be covered by peat swamp forests.

The drainage of these carbon-rich organic soils for plantations leads to massive carbon dioxide emissions, soil subsidence, and ecological and social problems.

Emissions from unsustainable cultivation are massive. According to an SIIA policy brief titled "Southeast Asia's Burning Issue", the carbon emissions from Indonesia's fires in 2015 exceeded average daily output for the entire United States on 26 out of 44 days. The US is the world second-largest source of greenhouse gas emissions, while Indonesia normally ranks fifth.

According to the Yale School of Forestry and Environmental Studies, land clearance for oil palm harvesting in 2010 alone created more than 140 million tonnes of carbon dioxide, equivalent to annual emissions released from 28 million vehicles. 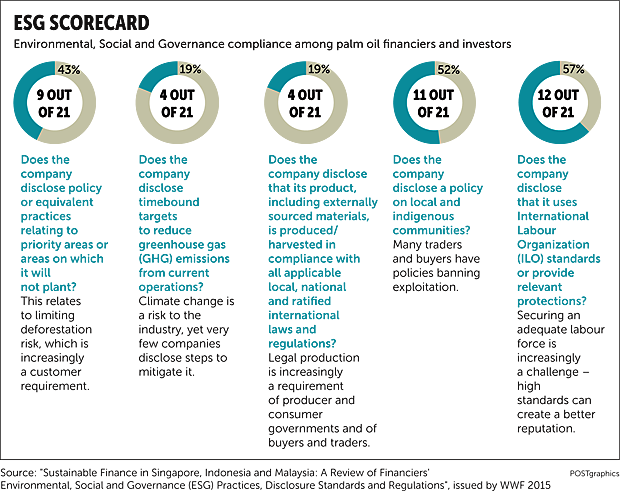 Key players in the palm oil industry have heeded the criticism and have been making steady progress in improving practices. Their most high-profile initiative is the Roundtable on Sustainable Palm Oil (RSPO) which was established in 2004.

But even the RSPO has been criticised for its failure to uphold good practices. For example, Wilmar International, which has committed to a "No Deforestation, No Peat and No Exploitation" policy, was accused by Amnesty International last year of using child labour and other labour abuses in Indonesia, while Olam International was accused of clearing rainforest land in Gabon.

Early this year, the international conservation group Greenpeace accused HSBC, one of the world's largest banks, of financing companies allegedly involved in forest destruction. In response, HSBC began incorporating "No Deforestation, No Peat and No Exploitation" into its investment policy.

One of the big challenges facing corporations is tracing palm oil through a massive and complicated supply chain. Oil palm plantations in Indonesia cover 6 million hectares, twice the size of Belgium. Indonesia also faces severe problems related to land tenure. Conflicts frequently arise when operators of commercial plantations claim land where they believe that usage by indigenous populations has lapsed. But for most companies, tracing palm oil back to the farm where the fruit was grown and harvested is difficult, costly and time-consuming.

However, both government authorities and some companies have been adopting new technologies to make the task easier. For example, the US-based commodity trader Cargill began using drones to inspect oil palm harvest land in 2015. President Widodo promised when he assumed office in late 2014 to create "One Map", a much-needed database to clarify land use and land rights lapses in Indonesia. The project is reportedly facing delays, however.

The latest sensation is the rise of Poldrone, a startup company opened by Jin Xi Cheong, the son of an oil palm harvester in Malaysia. Hailed as "one of the most interesting drone startups in Southeast Asia" by a regional tech magazine, Poldrone says that it can survey 100 hectares of land in just 15 minutes, compared with several hours for a physical visit.

Kiki Taufik, global head of Indonesia forest campaigns for Greenpeace, said digital mapping and the use of new technology such as drones will make it is easier and more affordable to trace the palm oil supply chain. However, supportive policies such as cheap loans and capacity training are needed to give small and medium-sized harvesters access to modern technology.

"The problem is the small and medium companies that also account for a large amount of production," he said. "Most palm oil products come from small and medium-scale companies and there is a need to ask how they treat labourers, take care of the environment and inform communities."

Meanwhile, holding those who finance the palm oil industry more accountable for their investments is also receiving more attention.

Last year, China issued its first Green Bond worth $39.6 billion to finance environmentally friendly infrastructure projects. The World Wildlife Fund has been producing its Palm Oil Investor Review since 2012, and in 2015 it released its first report on sustainable finance, with the main focus on palm oil, timber and pulp and paper in the region. The report appraised 59 companies and banks in Singapore, Indonesia and Malaysia and a few other international firms involved in financing and investing in palm oil companies for their ESG -- Environmental, Social and Governance -- compliance.

The assessment found international financial institutions are more compliant in terms of sustainability. Local banks tend to use ESG for risk management, but rarely public disclosure, except when in might relate to Islamic sharia law on businesses considered sinful, or in anti-money laundering efforts. Four appraised foreign investment banks -- ANZ, HSBC, Standard Chartered and Westpac -- perform better in these respects. In the region, the report found local banks in Indonesia more active in ESG.

Environmental problems can result in economic losses, undermine heath and induce social concerns that result in market and consumer boycotts. But human rights issues, especially labour abuses, can also be a pretext for trade sanctions. A particularly vivid example can be found in Thailand, where the prevalence of illegal, unreported and unregulated (IUU) fishing has earned the country a yellow card from European Union (EU), a major export market.

Last year, Amnesty International reported that major companies including Colgate-Palmolive, Kellogg's, Nestlé and Unilever were among nine food companies selling products made with palm oil that came from suppliers using child labour and involved in other rights abuses.

Amnesty International reportedly found that one of suppliers was Wilmar International, the world's largest palm oil trading company. Amnesty presented evidence of human rights abuses including women working for $2.50 a day and children as young as eight working in unsafe and extreme environments. Three of five palm growers in the AI investigation were certified for "sustainable" palm oil under the RSPO.

Wilmar has responded with efforts to improve its supply chain. Last month, the company collaborated with Verite, a Philippines-based non-profit group that promotes fair labour practices, to monitor its supply chain.

"Our collaboration with Verite is to find a real solution and improvements for people in the palm oil community. But it is important that solutions can be replicated not just in our own operations but also elsewhere in the industry," said Perpetua George, general manager for group sustainability at Wilmar.

Verite in 2013 released a white paper titled "Sustainable Palm Oil? Promoting New Measures to Combat Risks of Forced Labour and Human Trafficking in Palm Oil Supply Chains". The study was based on field research at plantations in Malaysia and Indonesia. Verite researcher Daryll Delgado told the SIIS forum that the palm oil industry has used migrant labourers from countries such as Indonesia, the Philippines, Nepal, Vietnam and Myanmar. There are restrictions on their freedom of movement, passports and other valuable documents are retained and, in some cases, wages are delayed or not paid at all.

Verite, also part of the RSPO initiative, recommended solutions such as supply chain assessment, training and capacity building to enable staff to better understand the risks associated with trafficking and forced labour.

It also recommends corporate compliance policies for fair and ethical labour as well as "grievance mechanisms" to open a chance for workers to lodge complaints about abuses.