In search of a healthier puff
Business

In search of a healthier puff

Despite its superficial resemblance to marijuana, hemp has a much lower content of a key compound, tetrahydrocannabinol.

Thailand Tobacco Monopoly is making an unprecedented move: it is considering planting hemp and processing it for use in consumer products.

The state enterprise is particularly interested in producing the byproduct hemp seed oil, as well as rolling papers, the materials used for hemp cigarettes.

For hemp rolling papers, Thailand Tobacco is seeking a partnership with the private sector, Daonoi Suthinipaphan, the enterprise's managing director, told the Bangkok Post in an interview.

Hemp seed oil can be mixed into cigarettes to reduce the quantity of nicotine and tar residues, and its flavour is similar to that of traditional cigarettes. Hemp rolling papers do not burn when they are lit, which reduces the dispersion of harmful cigarette smoke.

Thailand Tobacco learned of the benefits of hemp rolling paper from overseas research and will conduct its own study before the rolling papers are manufactured, Ms Daonoi said.

"Some smokers would prefer to buy imported cigarettes, but there is inadequate supply to meet their demand," she said. "We hope to manufacture cigarettes that are less harmful to Thais' health.

"We have challenged ourselves to possibly produce cigarettes that do not have a negative effect on health. We're carrying out our own research study on the issue, but some doctors will still be opposed to our new products because they are against smoking. We are starting at the question of whether we can lower nicotine and tar in cigarettes."

The cabinet has permitted the planting of hemp in Thailand, but such planting is subject to Public Health Ministry approval, which is delaying the company's progress, Ms Daonoi said.

If Thailand Tobacco wins the ministry's nod for hemp cultivation, it will begin planting in small areas in Phetchabun and Chiang Mai provinces for research use, she said. 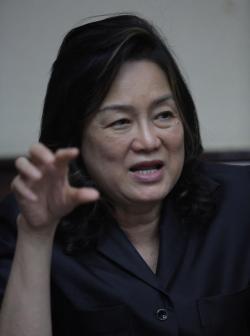 Hemp and marijuana are members of the same plant species, but the former is far less addictive because it contains no more than 0.5% of tetrahydrocannabinol (THC) content, compared with 14% in marijuana, she said.

Some 20 countries, including China, allow the planting and processing of hemp for diverse products. Raw materials processed from hemp include clothing, bulletproof vests, building materials, food supplements, pharmaceuticals and cosmetics.

Yunnan and Harbin are popular hemp-growing areas in China. The world's most populous nation is interested in working with Thailand Tobacco to process hemp into cannabidiol (CBD), which can be used to treat humans, but the company turned down the offer, Ms Daonoi said.

Thailand Tobacco is not interested in extracting CBD from hemp, but it's keen to encourage its contract farmers to grow hemp and generate a handsome income for growers, she said.

The enterprise's contract farmers in the North have hundreds of thousands of rai of plantation area, and that region has suitable weather for planting hemp.

The growing seasons for tobacco and hemp are different, so farmers can plant both. Hemp grows starting in May and is harvested during September to October, while the tobacco season begins in November and harvesting is in March.

To prevent farmers from planting marijuana together with hemp, as the plants resemble each other, the farming must be done with oversight from Thailand Tobacco, she said.

Ms Daonoi said hemp is an interesting economic crop because all of its parts can be industrially processed. The benefits of the crop are higher when the growing period is longer.

Many countries, including China, Canada, the US and Israel, have asked for information concerning hemp projects from Thailand Tobacco, as there is demand for hemp byproducts in those countries, Ms Daonoi said. A local company with 1,000 rai of farmland has shown interest in growing hemp under the state agency's supervision, she said.

Hemp is grown for research purposes at the Highland Research and Development Institute in Thailand.

Thailand Tobacco's research team has been approved to study the processing of hemp stalks into hempcrete, a biocomposite material that can be used in construction. The product is intended to be used to build a demonstration home in Chiang Mai province.

Hempcrete can absorb, store and release heat to keep homes cool in summer and warm in winter. It also blocks noise and is eco-friendly, Ms Daonoi said.