EEC tied to China's One Belt, One Road
Business

EEC tied to China's One Belt, One Road

The government says the much-touted Eastern Economic Corridor (EEC) is ready to be an important part of China's One Belt, One Road initiative, which envisions connectivity between China and Eurasia.

Speaking Monday at a seminar entitled "Thailand-Hong Kong-Shanghai Strategic Partnership on One Belt, One Road," Deputy Prime Minister Somkid Jatusripitak said the EEC will link up with One Belt, One Road via a Thailand-China rail development project. That project will connect Bangkok-Nakhon Ratchasima-Nong Khai with Vientiane, Laos and Kunming, China.

Thailand is also committed to investing in a submarine cable linking Bangkok with Hong Kong and mainland China in an effort to develop Thailand as the digital hub of Southeast Asia.

Mr Somkid said the One Belt, One Road strategy initiated by Chinese President Xi Jinping in 2013 would result in benefits felt far beyond China.

"The world is now stuck in uncertainty from changes to US international trade policy to the exit of the United Kingdom from the European Union, along with mounting challenges from global liberalisation policies," he said. "One Belt, One Road is the new hope for the world." 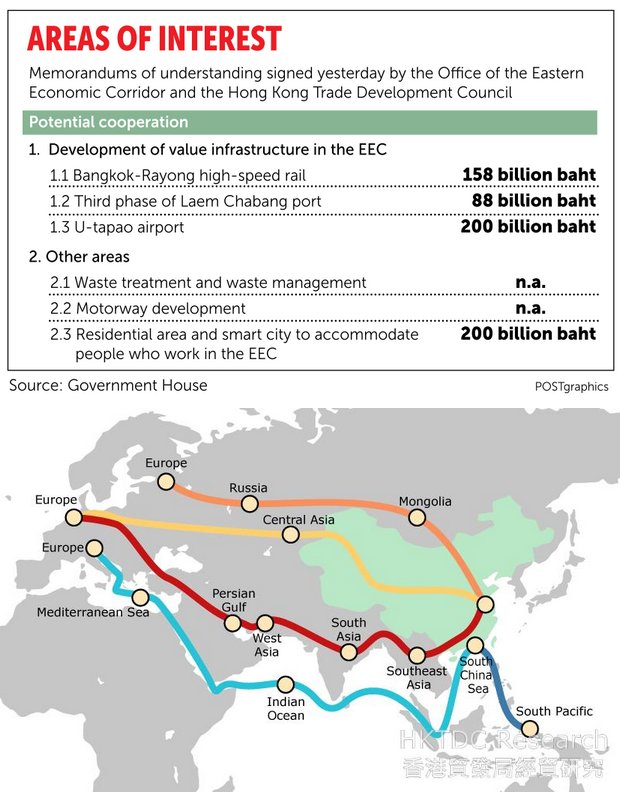 China's One Belt One Road project, which combines the Silk Road Economic Belt (by land) and the Maritime Silk Road never had mentioned Thailand before Monday. (Graphic via Think Global)

Mr Somkid said Prime Minister Prayut Chan-o-cha has stressed the significance of Hong Kong as one of Thailand's key strategic partners in helping develop the EEC.

"The territory has been designated by China to spearhead overseas investment, particularly in Asean, rather than Beijing, thanks to the former's flexible rules and regulations," said Mr Somkid. "Hong Kong is now one of the key pieces of China's One Belt, One Road strategy, designed to promote China's expansion of investment and trade to other regions such as Oceania, North Africa and Thailand, offering a perfect link to Cambodia, Laos, Myanmar and Vietnam."

Mr Somkid also called on investors in Hong Kong to invest more in the EEC, while the Thai government is committed to developing infrastructure to facilitate that process, including the Bangkok-Rayong high-speed rail link, expansion of U-tapao airport, the third phase of Laem Chabang, Sattahip port and the double-track rail link connecting Laem Chabang, Map Ta Phut Sattahip port and other residential areas.

He said the government also plans to develop certain areas of the EEC especially for investors from China, Hong Kong, South Korea and Japan.

The EEC is intended to be a special zone accommodating investment in 10 targeted industries promoted as clusters by the government.

The corridor spans a combined 30,000 rai in three provinces: Chon Buri, Rayong and Chachoengsao. The EEC is an enhancement of the Eastern Seaboard that has been the region's powerhouse for manufacturing and trade.

Industry Minister Uttama Savanayana said after Hong Kong, the government in June plans to hold roadshows in Japan to woo investors to the EEC and help upgrade Thai small and medium-sized enterprises.