US hotel chain Marriott International is confident of the potential of meetings, incentives, conventions and exhibitions (Mice) in Thailand, proved by the recent strong performance of its Bangkok Marriott Marquis Queen's Park Hotel. 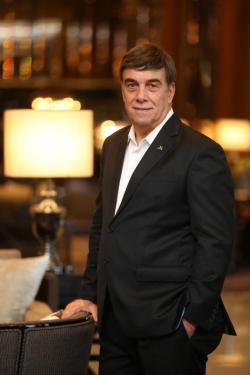 The five-star hotel, which reopened on Dec 5, will have 1,360 rooms and 35 meeting venues, and focus on Mice guests.

"Air transport in Bangkok is very good when compared with Singapore and Hong Kong. It's probably one of the best hubs in Asia-Pacific, which makes it convenient to bring people in and out," he said.

Hotels in Bangkok are also capable of accommodating big groups of Mice guests, said Mr Fabiano. The city has sufficient transport networks and other facilities to serve them.

Then after the meetings, Mice visitors can reach resort destinations in Phuket or Samui in a few hours, he said.

According to Thailand Convention and Exhibition Bureau, Thailand expects to have 27.1 million Mice visitors, both local and foreign, to generate 155 billion baht in revenue this year.

All these factors prompted Marriott to choose Bangkok to open its first hotel under the Marquis brand in Asia-Pacific.

Located on Sukhumvit Soi 22, Bangkok Marriott Marquis Queen's Park Hotel reopened its South Tower with 851 rooms as the first phase on Dec 5. This property was formerly known as Imperial Queen's Park Hotel before the multimillion-dollar renovation.

The second phase will start with the North Tower containing 509 rooms opening in the middle of June, then rooftop bars and restaurants, with its events area scheduled to open in July.

Mr Fabiano said three and a half months after the reopening, the hotel has received a good response from guests and was ranked 60th among the capital's 889 hotels listed on TripAdvisor.

"We expect to climb to 30th place in the next few months," he said. "I think our guests enjoy the hotel's physical layout, food, the hospitality of the staff and the convenient location."

The hotel's strength is large rooms and catering capacity to accommodate big groups of Mice guests.

The majority of the hotel's guests are foreigners, with the biggest contingent from the US, followed by China, Singapore and Japan.

Mr Fabiano said building a hotel under the Marquis brand requires more than 1,000 rooms and 5,000 square metres of meeting space. The main customers are Mice guests and the hotel should be located within city limits.

There were seven Marquis hotels around the world before the Bangkok Marriott Marquis Queen's Park opened.

"I think Thailand already has many attractions, from dining and culture to natural beauty to lure international tourists," said Mr Fabiano.

"If we make it more convenient for them to visit, more will come."