The economy expanded at its fastest quarterly pace in four years in the first quarter, boosted by recovering exports, but monetary policy will likely remain loose to cushion still-subdued investment activity.

The government raised its export outlook for 2017, suggesting the recovery was gaining traction but the economy still faces rising global trade protectionism and capital outflow risks as the US Federal Reserve prepares to hike rates again this year.

Gross domestic product grew a seasonally adjusted 1.3% in the first quarter from the fourth, aided also by household holding and tourism, the National Economic and Social Development Board (NESDB) said on Monday.

The pace was slightly faster than the 1.2% forecast in a Reuters poll and the 0.5% growth in the previous quarter, which was revised up from 0.4%.

From a year earlier, growth was 3.3%, also slightly better than a median forecast of 3.2%, and the 3% in the final quarter of last year.

"We expect growth to pick up a little further in the coming quarters, helped by robust external demand, supportive fiscal and monetary policies, and the current state of relative political calm," Krystal Tan of Capital Economics wrote.

The planning agency narrowed its 2017 economic growth forecast to a range between 3.3% and 3.8% from 3% and 4% projected earlier. It raised its export growth outlook to 3.6% from 2.9%. Exports, worth about two-thirds of the economy, are recovering after years of decline.

The economic growth has lagged other regional peers since 2014, when the army seized power to end months of street protests. The junta has ramped up spending and investment in a bid to lift domestic activity. But large infrastructure projects have been slow getting off the ground.

NESDB chief Porametee Vimolsiri, also a rate-setting committee member, said private investment should recover in the second half of the year and that monetary policy should continue to be accommodative.

The central bank has left its benchmark interest rate unchanged at 1.5% since April 2015. It next reviews policy on May 24, when most economists expect no change.

Economist Barnabas Gan of OCBC Bank in Singapore, however, said the strong growth data and potentially higher US rates later this year may serve as an impetus for the Thai central bank to raise rates by 25 basis points later this year. 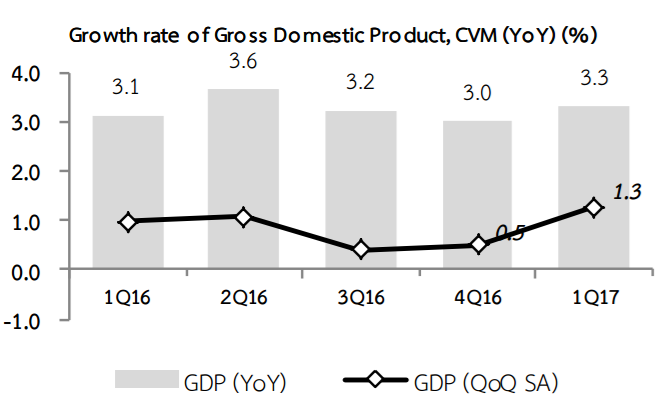 Credit Suisse Cuts Business With SoftBank and Its Founder, Son