No new sales this year in pricey district

For truly high land prices, try the area in and around Siam Square, where 2 million baht will buy you one square wah. (Photo by Weerawong Wongpreedee)

Land prices in the central business district (CBD) are expected to continue rising despite the already pricey levels in the area.

The average land prices in the CBD rose 6.4% last year, with the highest price recorded at 1.91 million baht per square wah in 2015.

Surachet Kongcheep, associate director for research at property consultant Colliers International Thailand, said land plots in locations along the skytrain route from Siam to Asok stations are getting scarcer, driving offering prices to over 2 million baht per sq w.

"No landlords on the main road along the skytrain in these locations have offered prices lower than 2 million baht per sq w since last year," he said. "The record high offering price is 2.5 million baht on Phloenchit Road."

That was for a plot on Chidlom Road opposite to Central Chidlom bought by SET-listed developer SC Asset Corporation Plc, which launched a luxury condo project there last year with an average sales price of 350,000 baht per sq metre. 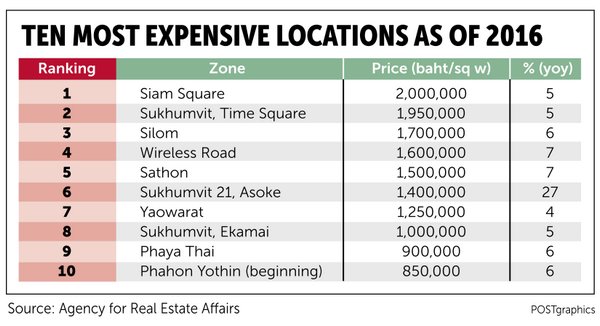 "Developers have a ceiling price for buying plots in prime locations," said Mr Surachet. "As soon as they think a condo project developed on the plot can be sold at a high price, they will buy despite such high land prices."

There has been no movement in these locations since late last year as demand for condos priced higher than 300,000 baht per sq m was limited, said Mr Surachet.

The highest increase last year was near the Sukhumvit-Asok Road areas, up 27% to 1.4 million baht per sq w, followed by locations near The Mall Tha Phra on Ratchadaphisek Road in Thon Buri district, with a 25% uptick to 300,000 baht per sq w.

As of the end of 2016, the highest land prices were still in Siam Square, Chidlom and Phloenchit areas at 2 million baht per sq w, expected to rise to 2.13 million by the end of this year, a rise of 6.5%.

Appraised land prices at these locations for 2016-19 by the Treasury Department were 900,000 baht per sq w, second only to Silom Road at 1 million baht per sq w.

"Locations on Rama IV Road from the Sathon to Sam Yan intersection will become emerging areas for new development, with at least two large projects expected to be located there," said Mr Chamnong.

Land prices on Rama IV Road are around 400,000-500,000 baht per sq w. AREA estimated they would rise to 1 million baht per sq w once the Grey Line between Rama III Road to Watcharaphol started construction.

According to SET-listed hotel group Dusit Thani Plc's report to the Stock Exchange of Thailand, a plot sized 23.5 rai on the corner of Rama IV and Silom roads, where the Dusit Thani Hotel is situated, was leased to Dusit for 30 years at a price of 7.33 billion baht, or 780,000 baht per sq w.

The lowest land price in Greater Bangkok was on Liab Khlong 13 Road KM5 in Lam Luk Ka area at only 2,600 baht per sq w because there was no infrastructure to attract new property development.