Getting the private sector to pull its weight when it comes to financing infrastructure is one of Asia's biggest challenges.

The last few decades have brought remarkable improvements across Asia in terms of transport networks, electricity generating capacity, telecommunications and access to clean water, among other essentials. Better quality infrastructure has improved people's lives and provided the impetus for a new wave of economic growth. But much more remains to be done.

More than 400 million people in the region still do not have access to electricity, 300 million lack safe drinking water, and 1.5 billion need better access to basic sanitation, according to the Asian Development Bank (ADB).

"Developing Asia will need to invest US$26.2 trillion between 2016 and 2030, or $1.7 trillion per year, if the region is to maintain its [sustainable] growth momentum, eradicate poverty and respond to climate change," the ADB said in a recent report. "Without climate change mitigation and adaptation costs, $22.6 trillion will be needed, or $1.5 trillion per year."

Large infrastructure projects in China are widely credited with helping to transform the country's economy. China invested 6.8% of its gross domestic product (GDP) in infrastructure on average from 2010-14. Less well known is the fact that some other countries, including India and Vietnam, are also investing more than 5% of their GDP in infrastructure.

However, the ADB's 25 developing member countries together invested $881 billion in infrastructure in 2015, which is well below the estimated $1.34 trillion annual investment needed over the five-year period from 2016-20 if climate change-related projects are included. This gap amounts to 2.4% of annual average projected GDP for the same period.

In light of the needs for more infrastructure spending, the ADB is working to strengthen its loan offerings to private companies and to utilise private funds through public-private partnerships (PPP) to build more railways, highways and renewable power infrastructure, in addition to expanding its loan programmes to governments, said president Takehiko Nakao.

"One can say one result of the ADB's work is to help create this huge economic zone in Asia," Mr Nakao told Asia Focus.

"While the region has done remarkably well, we cannot be complacent. Three hundred and thirty million people still live in absolute poverty, on less than $1.90 a day."

According to the ADB, the public sector in developing countries in Asia still accounts for 90% of overall investment in infrastructure. This amounts to 5.1% of GDP annually, far above the 0.4% of GDP coming from the private sector.

Investment from the private sector is expected to play a more significant role in the future, but there are challenges in attracting private money since projects require long-term commitments and do not generate immediate returns.

ADB vice-president Stephen Groff said the gap between the needed and actual investment in infrastructure in Asia is estimated at $459 billion annually, meaning Asia needs more investment from both the public and private sectors.

For example, approximately $400 billion is needed for infrastructure projects in Indonesia under the country's five-year development plan, but the government can provide only 40% of the total.

"We need 60% coming from the private sector," said Indonesian Finance Minister Sri Mulyani Indrawati, calling for private-sector investment where projects are shown to be economically viable.

Asia, except for China, has an investment shortfall equivalent to around 5% of GDP. The public sector could provide 2% by pressing ahead with fiscal reforms. For the remaining 3%, private-sector funds need to be tapped, meaning credible PPP structures and political stability are essential to attract funding from the private sector.

"To entice private-sector financing for infrastructure, macroeconomic policies [of the host country] should be well-managed and the regulatory environment should be more predictable," said Jin Liqun, president of the Asian Infrastructure Investment Bank (AIIB).

Toshiaki Higashihara, president and CEO of Hitachi Ltd of Japan, agreed, saying, "There are so many risks in political stability, financial stability [in terms of investing in developing Asian economies]. The host country should take responsibility for decision-making, otherwise no stakeholders will follow that project."

Previously known mainly for electronics, Hitachi has shifted its focus to infrastructure and other Japanese companies have followed the trend to focus on this potentially lucrative field. 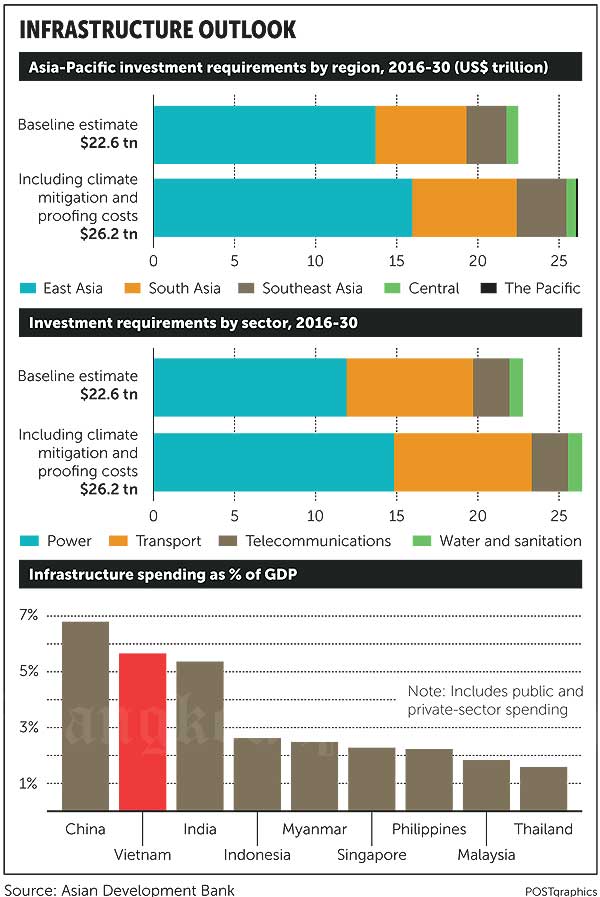 The opportunities for bankrolling projects across the region are tremendous. However, some question whether competition between multilateral lenders, which are backed by the world's superpowers, will ultimately be constructive or detrimental to the region as a whole.

Competition between Japan and China to build infrastructure in the region has been healthy, helping countries to develop, said Ms Indrawati.

Japan is advocating the construction of high-quality infrastructure in Asia -- drawing on the expertise and products of Japanese suppliers -- and seeks the backing of the ADB, with which it has a close relationship. On the other hand, China is offering an alternative to Asian nations with funding from the AIIB, the formation of which Beijing spearheaded.

The AIIB added 12 new member countries in March, expanding its roster to 70. However, the United States and Japan have yet to apply out of concern that the international lender will be a tool to fund Chinese ambitions. China has contributed about 30% of the AIIB's $100 billion in capital and has around 25% of the voting rights, holding effective veto power over key projects.

"This is a good competition," said Ms Indrawati. "You do not want to build infrastructure, [even if it is] high quality, that people and the country cannot afford. With the combination of pressure coming from China and many other countries, that creates competition that will reduce the cost."

High standards set by Japan in terms of environmental impact, along with good governance and social responsibility, will also serve to pull the AIIB and China into line and discourage inappropriate behaviour.

"This creates pressure also for the AIIB to not say 'I can deliver you fast and cheaper' but then end up delivering less quality or polluting the air," Ms Indrawati added.

Ultimately, cooperation between the ADB and AIIB will be crucial in meeting the vast infrastructure needs of Asia.

In an effort to bolster his One Belt, One Road initiative, Chinese President Xi Jinping recently pledged a major funding boost for the new Silk Road, including an extra 100 billion yuan ($14.5 billion) into the existing Silk Road Fund, 380 billion yuan in loans from two policy banks and 60 billion yuan in aid to developing countries and international bodies in countries along the new trade routes.

"I do believe, in the case of One Belt, One Road, it calls for close cooperation among all of the countries working together for global and regional connectivity to achieve a win-win," said Mr Jin of the AIIB.

Mr Nakao of the ADB reaffirmed that the bank was open to cooperation on China's grand initiative, although attention to economic feasibility must be highlighted.

"We do not need to regard the AIIB as a kind of rival because there is a very large need for finance, so we can cooperate," he said, addressing widespread concerns that the Chinese-led AIIB will pose a challenge to the ADB's operations in the region.

The ADB and AIIB have co-financed three infrastructure projects since the latter started operations in 2015: a highway in Pakistan, a natural gas field upgrade in Bangladesh, and a bypass road in Georgia.

Mr Nakao also noted that, unlike the AIIB, the ADB's focus was not limited to infrastructure, but also covers climate change alleviation and poverty reduction.