World rice prices are expected to rise by US$20 (682 baht) a tonne over the next three months, driven by a sharp surge in global rice demand, according to experts.

Purchase interest is also expected to increase on a continuous basis from China, Africa and the Philippines, he said.

"We have now gone from a buyer's market to a seller's market," Mr Zwinger said. "The power is shifting back to the origin."

The Thai government now controls 4.32 million tonnes of state rice stocks and aims to dispose of it all by September this year, given rising rice demand.

Of the total, the sale of 2.5 million tonnes of mostly low-quality and decaying rice fit only for industrial use will no longer dampen the price of newly harvested rice.

On May 15, the government called the second auction for 1.82 million tonnes of its remaining rice stock fit for human consumption.

Results are likely due by the first week of June, Duangporn Rodphaya, director-general of the Foreign Trade Department, said last week.

Of the remainder, 2 million tonnes will serve as animal feed and the rest will be used for energy production.

From the May 2014 coup until May 24 of this year, a total of 12.7 million tonnes of rice have been sold via auctions, fetching 114 billion baht.

Mr Gulrajani said key risks for the global rice trade this year will stem largely from droughts and flooding in Asia, as indicated by a surge in rice imports by Sri Lanka.

"We expect the world's rice market to remain in an upward trend in the second half of the year thanks to lower global rice stocks, as Thailand will no longer hold its hefty share," he said. "For the remaining months, we have to keep a close eye on the rice self-sufficiency policies of rice-importing nations, oil prices and the new harvests by rice-producing countries."

Chookiat Ophaswongse, honorary president of the Thai Rice Exporter Association, said lower-than-expected rice production in Vietnam accounts in part for the lower global supply, while Thailand's good-quality rice stocks are about to be depleted.

The free-on-board Thai rice export price is now quoted at US$425 a tonne, up from $365 a tonne a couple of weeks back.

Mr Chookiat said he expects Thai rice prices to stabilise for a certain period as overall rice shipments for the country reach 10 million tonnes this year. 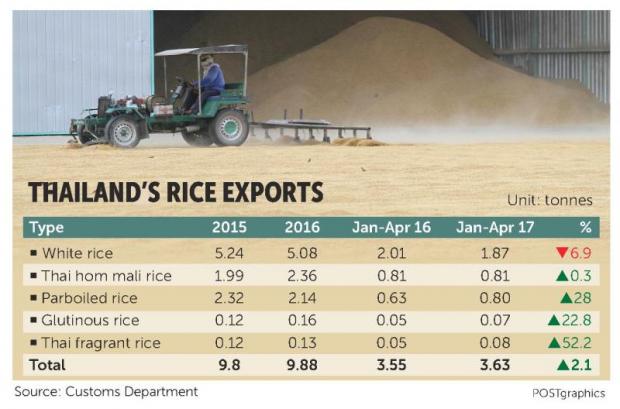