According to the Forbes list of Thailand's 50 Richest in 2017, more than two-thirds of the tycoons saw their wealth increase, with the top five notching the biggest dollar gains. The collective net worth of Thailand's 50 richest is US$123.5 billion, up 16% since 2016.

The CP Group's net worth includes shares owned by Mr Dhanin and his three brothers, Jaran, Montri and Sumet, who are the biggest gainers in dollar terms, adding $3 billion to their wealth to retain the top rank with a net worth of $21.5 billion.

CP Group has operations in Thailand and overseas with core businesses involving agribusiness, retail and telecommunications. The empire now falls in the hands of Mr Dhanin's two sons after he decided to step down earlier this year.

His youngest son, Suphachai, succeeded him as chief executive of CP, while his eldest son, Supakit, is chairman of CP Group, overseeing CP's business in China.

Second on the wealth list is TCC Group chairman Charoen Sirivadhanabhakdi, who grew richer by $1.7 billion, making his net worth $15.4 billion.

In April, Mr Charoen announced the largest property investment in a single site in the country with One Bangkok, a 120-billion-baht business district at the intersection of Rama IV and Wireless roads. 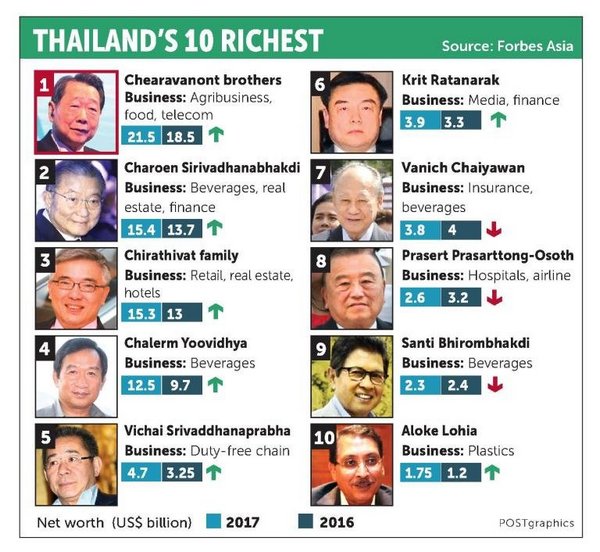 Coming in third is the Chirathivat family, which operates retail businesses under the Central Department Store brand, as well as hotels and property, with $15.3 billion, up $2.3 billion.

Central Group, under chief executive Tos Chirathivat, restructured its management board late last year by bringing in a number of key professionals, including former central bank governor Prasarn Trairatvorakul, to run the group's operations and brace for increasing challenges in retail business.

This is the first time the 70-year-old company recruited outsiders to help manage group business, which has a combined sales revenue estimated at 320 billion baht.

A notable gainer on this year's list is duty-free tycoon Vichai Srivaddhanaprabha, who moves up from No.7 to No.5 with $4.7 billion in wealth, up from $3.25 billion in 2016.

Mr Vichai replaces Vanich Chaiyawan, a founder of Thai Life Insurance Co, whose rank dropped to No.7 as his net worth dipped by $200 million to $3.8 billion.

The rich list was compiled using shareholding and financial information obtained from the families and individuals, stock exchanges and analysts, the Stock Exchange of Thailand and regulatory agencies. The stock market rose by 12% in the past 12 months.