New research by the online travel agency Kiwi.com has revealed that Thailand is among the world's top 10 countries for the cheapest airline tickets.

Malaysia was the lowest in the global table, followed by Bulgaria, India, Turkey and Romania.

Belgium had the most expensive airline tickets, followed by the Netherlands, Qatar, Chile and the United Arab Emirates (UAE).

The average cost per 100 kilometres of travel for Thailand, factoring in both short-haul and long-haul journeys, was €6.20 or 237.90 baht using yesterday's exchange rate.

That amount is 62% more than Malaysia's rate, which averaged €3.84 to be the most affordable country for airline tickets.

Kiwi.com, formerly known as Skypicker, said the rankings were the result of the analysis of over a million flights to determine the average prices of short-haul and long-haul flights on low-cost carriers (LCC) and full-service carriers (FSC) from each of the countries.

Domestic flight costs were calculated by finding an average airfare from the country's capital to up to five major cities within the country, or to a major city in a neighbouring country when no domestic flights were available.

All flights were checked for the same dates of travel, taking into account high and low seasons. Ticket prices fluctuate constantly because of fuel prices, sociopolitical shifts such as Brexit, and recent elections. 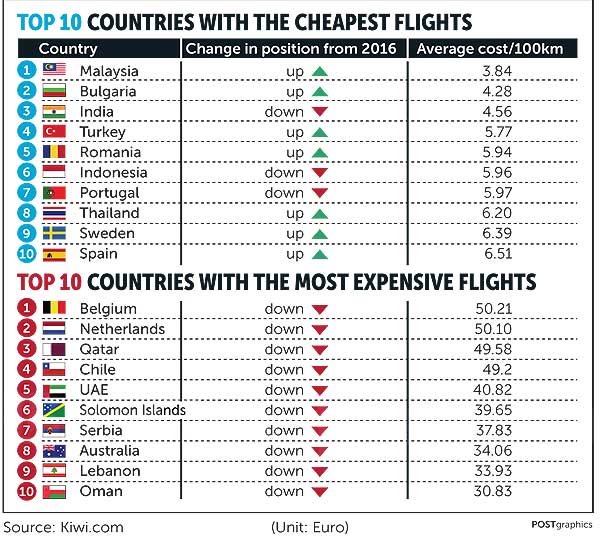 "Egypt and Turkey, for example, saw a decline in ticket prices because of a decrease in demand as a result of regional turmoil," according to Kiwi.com chief executive Oliver Dlouhy.

Further findings from the rankings include: