Captain on the bridge
Business

Captain on the bridge

The fate of Raja Ferry Port was touch-and-go for years after being taken over by Apichart Chayopas's family. But upon finding its sea legs, a business that once risked running aground found a way to make sail in an ever-changing world.

'In my business, I send my employees to work out at sea,' Mr Apichart says. 'That's why I need to take care of them.'

Many industry leaders attribute their success in business to effective risk management, a knack for strategy and an ability to seize opportunities as they present themselves.

But for the owner of Raja Ferry Port Plc, the secret to keeping a once-sinking business afloat was people management.

"In my business, I send my employees to work out at sea. That's why I need to take care of them," says managing director Apichart Chayopas.

Mr Apichart says his employees work hard every day to transport hundreds of tourists from the mainland to the island. The health and safety of those visitors are in the hands of his staff.

"When they are working, I normally allow them to do so freely -- to the fullest of their ability," he says. "I myself just work as a conductor."

Raja Ferry has 1,500 employees, of which 500 are in the ferry business, and the rest work at the company's five-stars hotels on Koh Samui.

Mr Apichart says that when his family first took over the business, it had been operating at a loss for years.

But they decided to take the plunge anyway, seeing the strong potential from a business carrying thousands of people to major tourist destinations.

The acquisition also happened at a time when the government was giving its full support to the tourism industry to generate greater returns for the country. 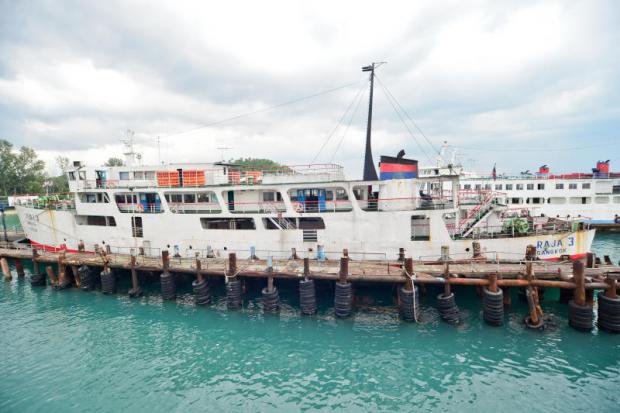 Raja Ferry is the biggest ferry provider in the Koh Samui area, with 13 ferries carrying 1.3 million people a year.

Mr Apichart says he and his father also saw a chance to diversify into other tourism-related sectors, such as hotels and resorts.

The father had been at the helm of the business for several years before relinquishing control to the son. That was when Mr Apichart says he saw the core reason the business had been on the verge of shipwreck for so many years.

"It was because of the people," he says. "We didn't put the right people in the right positions, and many didn't know how to do their jobs correctly, resulting in losses."

He started changing course by educating his employees and encouraging them to realise their duties, which helped the business run more smoothly.

And while Mr Apichart had figured out the human component at play, there were other risks that had to be understood at the time. 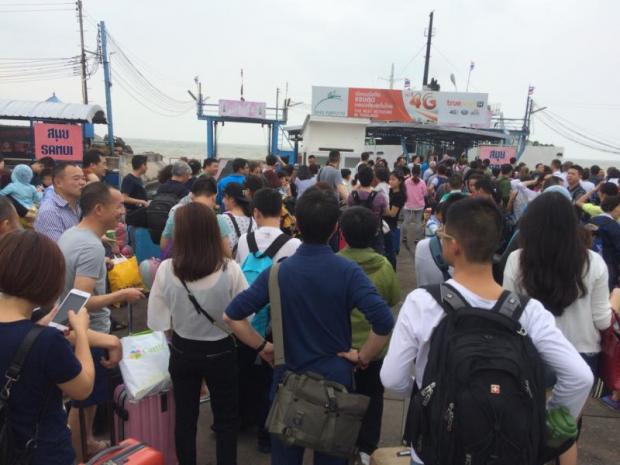 He says his business also faced volatile oil prices and rising operating costs that had to be tackled immediately in order to keep the business afloat.

"By that time, the school I had set up was also educating my employees to learn what they should do to manage such risks along with me," he says. "It was a part of the research and development strategy we implemented."

After several years, Mr Apichart eventually shut down the school, believing he had already created a workforce sufficiently skilled at navigating the choppy waters ahead.

When he initially took the tiller from his father in 1997, the company operated six ferries, carrying 600,000 tourists a year. 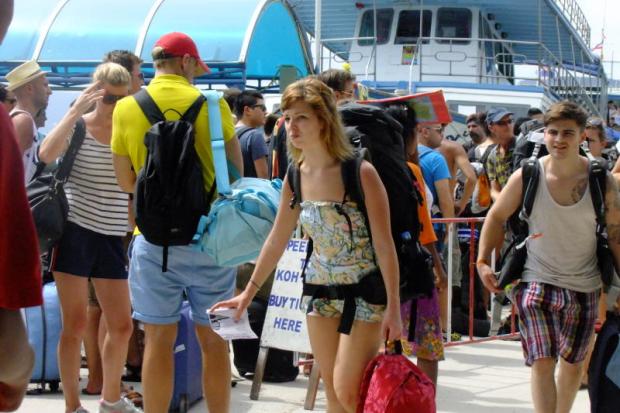 Today it's the biggest ferry provider in the area adjacent to Koh Samui, boasting 13 ferries carrying 1.3 million people annually via four of its own ports.

"Our target is to have more ferries in order to transport up to 2 million people per year, which means that the company needs to hire more employees," Mr Apichart says.

At present there are three major ferry service providers on Koh Samui. But Mr Apichart says Raja Ferry is the market leader with 30 years of experience, having captured a 70% market share as a result.

"We aim to buy two more ferries, raising the total to 15, allowing us to transport more tourists to Koh Samui and Koh Phangan, as well as expand our business by opening new ferry routes in the future," he says.

In total, the company is aiming for annual growth of 5-10% from 700 million baht.

Mr Apichart says the company's board of directors has already approved the plan to buy new ferries, with 250 billion baht earmarked for expansion. 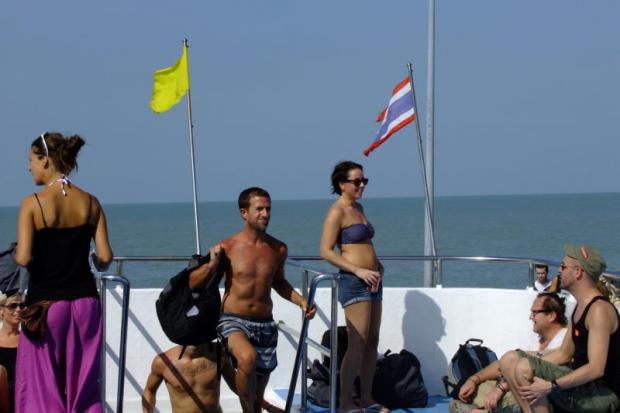 Tourists enjoy the sun on board a Raja Ferry boat.

Moreover, Raja Ferry is seeking opportunities to expand into logistics services to benefit from rising demand in Cambodia, Laos, Myanmar and Vietnam (CLMV), as well as in Thailand.

The company is conducting a feasibility study to see if such a move will be viable.

"We aim to start providing logistics services among the 280 nautical miles along the CLMV countries," Mr Apichart says. "It takes around 19 hours to deliver goods within this area."

He says the company expects the tourism industry in Asean countries, particularly in the CLMV, to boom over the next several years: "That means demand for transport will rise in the same direction, which has naturally attracted our interest."

To expand from being a ferry service provider to a comprehensive logistics provider, Raja Ferry plans to use its ports in the Gulf of Thailand as a centre to distribute goods from Thailand to Cambodia and Vietnam on the east and to Singapore and Malaysia in the south. 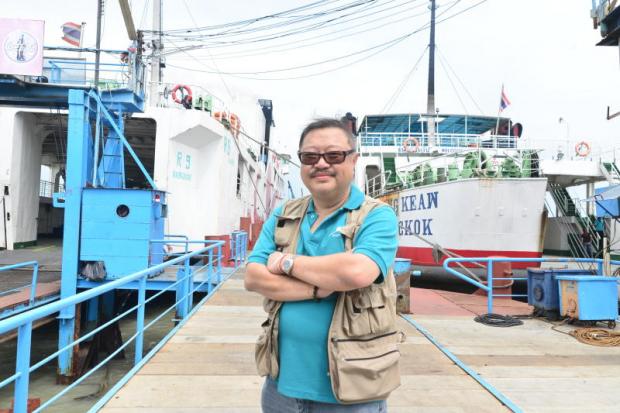 For the ferry business, which will remain Raja Ferry Port's core function, the company plans to attract more Asian tourists, particularly Chinese, to offset a drop in American and European visitors.

To attract more Chinese travellers, the company has joined forces with Chinese tour agents to expand market channels, and it has employed the smartphone payment platform called Alipay in cooperation with the Chinese e-commerce giant Alibaba.

"Raja Ferry is the first company offering these new forms of payment and services on Koh Samui, as we are trying to strengthen our business and adjust ourselves to a changing world," Mr Apichart says.

The company also has to adjust its business to match tourists' changing behaviour, as most of them are choosing to stay for shorter periods of time at any given destination.

"A tourist might spend 3,000-4,000 baht a day, spending a shorter amount of time in one place before moving to another, so our business needs to adjust our services to match changing demand," Mr Apichart says.

After running the business for years, he says he realises he is approaching the next stage of his life, when he will have to step aside and pass the torch.

"I have built up the business to be strong enough to pass it on to the next generation, and I will spend the rest of my life doing good things for others and for Thai society," Mr Apichart says. 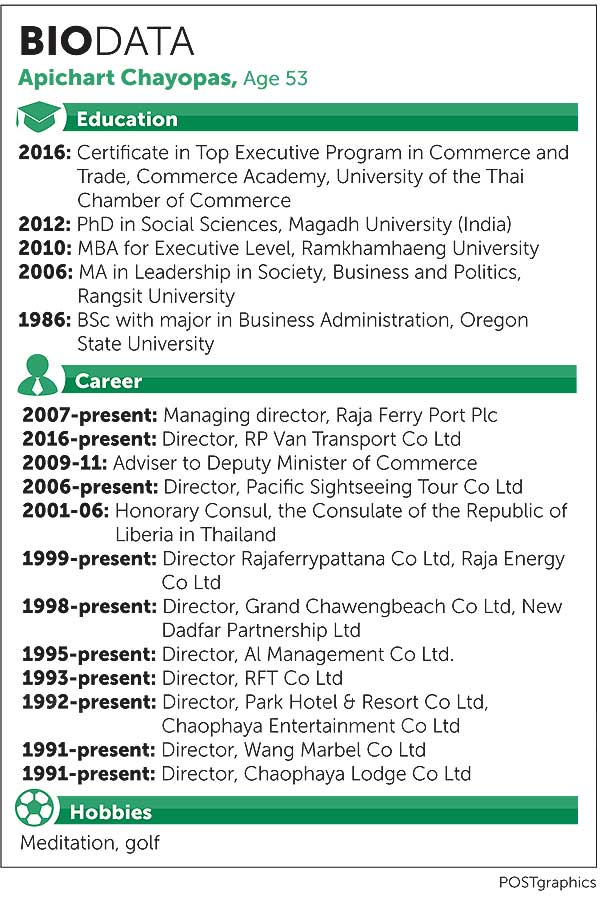 Pro-democracy students at more universities have turned to campus flash rallies to express their frustration at what they perceive as inequality and injustice.