BoT eases up on forex regulations

The Bank of Thailand yesterday loosened a set of foreign exchange regulations, including allowing Thais to invest directly in securities abroad at an amount of up to $1 million a year, in a fresh bid to accommodate capital outflows, curb the appreciating baht (which briefly slipped below 34 to the US dollar) and make doing business easier. 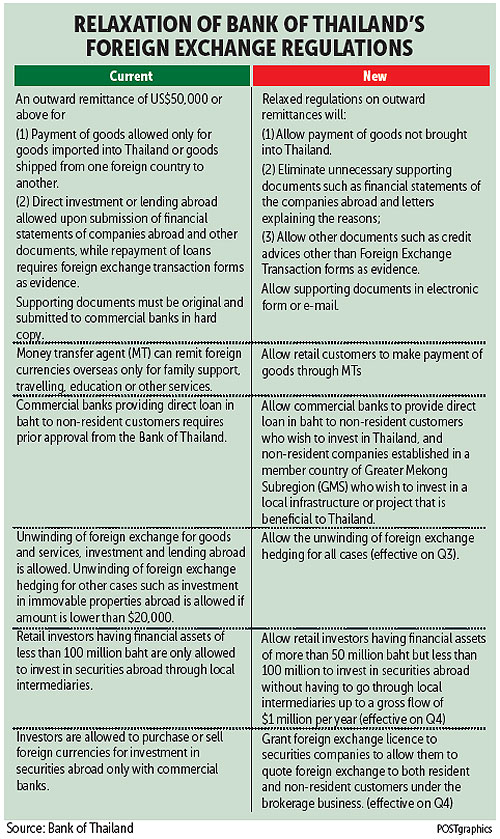 Investors with assets of at least 50 million baht will be permitted to directly invest in securities abroad in amounts of up to $1 million a year from the fourth quarter of this year, the central bank said in a release.

Commercial banks will also be allowed to lend baht to non-residents for investment in Thailand and countries in the Greater Mekong Subregion, the central bank said.

According to the current rules, retail investors with financial assets of below 100 million baht are only allowed to invest in overseas securities through local intermediaries including asset management companies, securities brokers and commercial banks.

"After a six-month consultation with all of the stakeholders, the Bank of Thailand finally rolled out the foreign exchange reforms to help enhance the country's competitiveness," said Bank of Thailand governor Veerathai Santiprabhob.

He said the reform focuses on four main approaches: streamlining the procedures and documents, cancelling or relaxing regulations to facilitate hedging, increasing the amount of foreign exchange transactions and boosting innovation and creating more investment choices.

Relaxation of three regulations is effective immediately: reducing procedures and documents on outward remittances, allowing payment of goods through money transfer agents and allowing commercial banks to provide direct loans in baht to non-residents to invest in Thailand.

"These relaxations will help lower costs for the private sector by more than a billion baht annually," Mr Veerathai said. "Such benefits do not include the indirect benefits such as better competitiveness and more financial innovation."

The planned regulatory relaxation to grant foreign exchange licenses to securities companies, which will come into force in the fourth quarter of this year, will help increase competition in the foreign exchange market, he said.

Mr Veerathai said the reforms will not affect the central bank's responsibility of maintaining financial stability.

The reforms are part of the "regulatory guillotine" programme, which aims to cancel and relax regulations that were implemented in the past and have not been reviewed for a long time.

Mr Veerathai said the programme will be expanded into other areas under the Bank of Thailand's authority at a future date.

"The [foreign exchange regulatory] reform is being done only for the purpose of improving the ease of doing business in Thailand and helping the private sector to more easily manage foreign exchange risks," he said. "For measures associated with the management of capital flows, if needed, the BoT will make an announcement only when those measures are put into effect."

The baht yesterday briefly slipped below the 34-threshold to 33.95 baht against the greenback -- a level not seen for nearly 23 months -- but then bounced back to trade at 34.02.

Vachira Arromdee, assistant governor of the financial markets operations group, said that even though the baht has strengthened somewhat, it is moving in line with other regional currencies.

"It is normal, if we understand the behaviour of investors to speculate when there's news regarding BoT measures," Ms Vachira said.

"But we have seen that the baht is still moving in line with other currencies in the region," she said, adding that the baht's volatility is viewed as moderate.

The baht's average annualised one-day volatility rate was recorded at 3.6%, lower than that of other regional currencies such as the Korean won (9.7%), the Singaporean dollar (5.8%) and the Taiwan dollar (4.9%) but higher than others such as the Philippine's peso (3%) and the Malaysian ringgit (2.8%), according to central bank data.