Regulators plan to impose financial penalties on Facebook Inc and other companies with video-sharing platforms if they fail to swiftly remove what they deem to be illegal content. 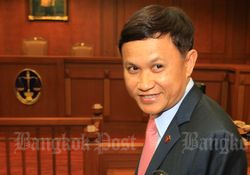 "They have to have someone to talk to us. When we give the order, we will talk in Thai," says Col Natee Sukonrat. (Bangkok Post file photo)

The new framework would give authorities the power to immediately demand the removal of offensive material without waiting for a court order, Col Natee Sukonrat, vice chairman of the National Broadcasting and Telecommunications Commission (NBTC), said in an interview on Wednesday. Details will be released as early as this month, he said, and companies would have about a month to comply.

"I will not touch the service; I will touch the way you make money," Col Natee said when asked about penalties if companies ignore the requests. "They have to play by the rules," he said. "I think they will cooperate because they make a lot of money from Thailand."

"When we receive such a request, we review it to determine if it puts us on notice of unlawful content," the company said in an email to Bloomberg. "If we determine that it does, then we make it unavailable in the relevant country or territory and notify people who try to access it why it is restricted."

The government has faced criticism for clamping down on free speech ahead of elections planned for next year.

In April, the NBTC gave Facebook a deadline to remove posts and links to web pages deemed illegal. When the date arrived, the regulator said it would seek court orders and the company was cooperating with officials.

Col Natee said there’s a variety of illegal content online and the new framework is intended to have a "minimal" impact on the public, while protecting people from harm.

He said authorities wanted companies to respond faster to requests to remove content. For instance, he said Facebook asked for the orders to be translated into English before they could comply with them -- a process that can take weeks.

The new framework would force broadcasters to comply with requests immediately and then petition the courts if they think the order was illegal, Col Natee said. It would also compel them to have a senior manager in the country who is able to understand Thai, he said.

"We will not talk in English to them," he said. "They have to have someone to talk to us. When we give the order, we will talk in Thai."

Facebook has 47 million users in Thailand. Col Natee said the company earned about 3 billion baht in revenue from the country last year, while YouTube had revenue of 1.5 billion baht. Neither company has released a breakdown for Thailand. Facebook got $4.4 billion of revenue from Asia last year, or about 16% of its total.

Col Natee said that illegal content included things like false advertising, selling sexual services and gambling. He said Facebook took too long to remove an April video of a man who hanged his infant daughter.

The colonel also dismissed concerns that Thailand’s policies would hurt the country’s ability to attract tech companies. The government has a goal of encouraging innovation to invigorate the economy saddled with overcapacity in manufacturing and reliant on exports and tourism.

The plan, called Thailand 4.0, seeks to bolster sectors ranging from biotechnology and medical care to robotics and electric vehicles in an effort to lift the economy out of the so-called middle-income trap. Still, challenges include uneven educational standards, a shortage of skilled workers and intense bouts of political volatility.

"Thailand 4.0 does not mean you can do anything in Thailand," Col Natee said. "Anyone who wants to do service in Thailand has to follow the law. Global guidelines and global policy is ok, but you have to listen to the local voice as well."