Foreign-exchange expert Mario Singh aims to empower investors and show them how to make the most of asset classes from currencies to gold.

It was quite a leap from a home-cleaning business to foreign-exchange trading, but Mario Singh has since channeled his curiosity and enthusiasm for the world of currencies into a rewarding career as a high-profile investor and educator. Now one of the prominent forex analysts and trading coaches in Southeast Asia, the founder of the online brokerage Fullerton Markets loves sharing his insights with others.

Mr Singh was wearing gold-coloured sneakers when Asia Focus caught up with him, walking around at the Fullerton Leaders Summit 2017 in Bangkok last month to ensure that everything was running smoothly.

He was not pacing with anxiety but casually chatting with his staff and investors who had come to listen to him explain how they could make money from trading money. Most conferences devoted to foreign exchange and interest rates tend to be pretty sombre and sometimes geeky affairs, but that's not the vibe Mr Singh wants to convey.

The atmosphere at the event reflected the founder's friendliness and his belief that having fun should be one of the perks of working life.

A chemical engineer by training, the Singapore-based Mr Singh was working with a home cleaning company when he chanced upon a possible new profession.

"That was a huge jump," he recalls. "I met a friend in a coffee shop who was trading on a laptop and I said, 'Fantastic, are you making money?' and he was. So I said to myself, 'I want to do that as well.' So I jumped in headfirst, funded an account, and proceeded to lose all of it within six days," he says with a laugh.

Well, not quite all of it, but enough that he realised that if he wanted to play the markets for a living, he ought to know what he was doing first. Everyone needs to educate themselves first before they dive into any market or they will be brought rudely back to earth faster than they thought possible.

"I didn't know what I was doing but my turning point came when I met a mentor and that changed my life," he said.

"I was not someone from the industry. I was not trained in finance but my mentor has given me the right knowledge and education and I have picked it up from there."

A self-proclaimed "good learner when I don't understand things", Mr Singh honed his skills over the years and developed a reputation as someone who could teach others as well. That led him to found FX1 Academy in 2006, the first and largest forex education firm in Singapore and Malaysia.

As an educator, he has trained private bankers from Julius Baer, ICBC and other major international banks along with thousands of retail investors on how to trade forex profitably. A regular guest on CNBC and Bloomberg, he has also written several books. His two best-sellers are 17 Proven Currency Trading Strategies and Unlocking the World's Largest Financial Secret.

"When I was at the academy, in the first few years, a lot of the stress that came with the job was spreading the knowledge about education because many people used to view online trading as risky. 'Oh it's illegal,' they'd say, and you always have to deal with that because you are dealing with the retail mindset," he says.

"But over the last 10 years I dare say that I've been one of the pioneers in the industry, at least in Asia, and we built a good name around that because we focus relentlessly on education. So in the early days a lot of the struggle was about changing people's mindset and getting them to embrace the idea that there is a viable alternative in creating wealth online."

A decade on from FX1, Mr Singh reached another milestone in his financial career when he founded Fullerton Markets in April 2016. The company is currently one of the fastest growing brokerages in Southeast Asia.

With that vision, the New Zealand-registered brokerage now provided fund safety with segregated accounts via ANZ Bank, independent trustee administrative via Kiwi Global Trust and trustee liability insurance via AIG. The company says it is one of the first of its kind in the world to provide insurance for client accounts. 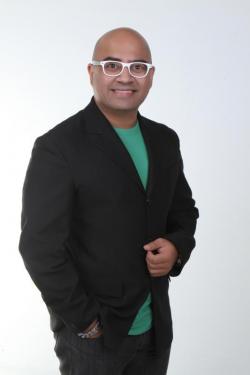 Mr Singh had two mentors when he started his trading journey. The first was Ed Ponsi, a currency trading expert who wrote Technical Analysis and Chart Interpretations, and the second was Kathy Lien, another forex expert and the author of Day Trading and Swing Trading the Currency Market: Technical and Fundamental Strategies to Profit from Market Swings.

Mr Ponsi's book challenges traditional assumptions about charting and technical analysis by arguing that charting is widely misused and misunderstood by most retail traders.

"And when I say Ponsi I don't mean 'Ponzi scheme' because as he keeps telling me, 'Mario! My surname is P-o-n-s-i'," he says with a laugh. "But my mentors have given me a great start in life."

(A Ponzi scheme is a fraudulent investing scam that promises high rates of return with little risk to investors but in reality it only generates returns for older investors by acquiring new investors, similar to a pyramid scheme. It is named after Charles Ponzi, a con artist in the US and Canada in the 1920s.)

"Setting the joke aside, something that I like to share with investors is that you should always find someone, a mentor who has been there, because a mentor is able to help you cut short your learning curve," he recommends.

"I might have been on CNBC and Bloomberg over 40 times over the past few years but they have been on 80 or 100 times so all my TV experience I will attribute to my mentors because they gave me a leg up and they have taught me a lot about fundamental analysis."

Many people who offer trading platforms tend to provide a lot of technical analysis and charts, but Mr Singh says what his mentors gave him was the gift to fuse technical and fundamental knowledge to "see the market in a whole different way".

"I am a big believer in online trading but to stretch that out when talking about investments, I think property is something that most people want," he continues. "But I'm always telling people who are investing in property or things outside of online trading that knowledge of the currency market will always help you."

Mr Singh explains that before money flows into the stock, bond or property markets, it has to flow into the country first. When it flows into a country, it has to be converted to the local currency -- the dollar to the baht in Thailand's case.

Having a knowledge of how currencies move will put investors in a better position in terms of what they want to invest in. Understanding what moves interest rates, for example, is crucial for property investors.

"Knowing more about interest rates will put you ahead of the game if you are a real estate investor. Similarly, by understanding currencies it brings you to understand gold because all else being equal, the US dollar and gold are inversely proportional to one another," says Mr Singh.

"Knowledge of currencies is knowledge that will help you to move out, whether it is into stocks, bonds, forex, gold and property, and so on."

In terms of dollar movement this year, Mr Singh said the problem for the market right now is to decipher what President Donald Trump really wants. For instance, Mr Trump has said he wants low interest rates and a weaker US dollar but his polies do not seem to back up this contention.

"He says he wants to lower corporate tax from 35% to 15%. He says he wants to deregulate and reduce regulations on both the financial industry and the energy sector. And if he really does that, it is going to bring us a flashback to what happened in 2007 and 2008 because debt is going to skyrocket," Mr Singh predicts ominously.

"He says he wants to increase spending on infrastructure and manufacturing and if he proceeds to do all these three things, it is not going to give him a weaker US dollar because if you are pulling investment into the county, in this case the US dollar is going to strengthen and this is the problem that the market has to decode."

When it comes to trading, the job is "never to predict but to react", and that means that Mr Trump can say whatever he wants, all traders have to do is look at the chart and once it "starts to gain momentum in whichever direction, just follow that direction because it shouldn't be too far off".

The United States' GDP of US$18 trillion is far bigger even than China's $11 billion, so what is happening in the US will continue to have a huge effect on monetary policy trends in Southeast Asia. Japan and Europe are in the same category right now because of very loose monetary policy. Basically, the Bank of Japan and the European Central Bank are going in a different direction from the US Federal Reserve.

Mr Singh expects the Bank of Thailand will most likely keep the country's benchmark interest rate at 1.5% for the foreseeable future because the baht at between 34 and 34.5 to the dollar is the strongest it has been in two years.

According to Bloomberg, the baht has strengthened from 35.825 at the start of the year to 34.052 as of last week, while the central bank has left its policy interest rate unchanged since a cut in April 2015. It is just 25 basis points above the record low that was reached in 2009, a year after the global financial crisis.

What is interesting about the Thai stock market, in Mr Singh's view, is the high proportion of retail investors, who account for about 60% of the average daily turnover on the Stock Exchange of Thailand.

"Singapore is considered one of the most highly capitalised markets but only 20% of the [turnover on the] Singapore Exchange is being traded by retail people while 80% is traded by institutions, and this is one of the reasons I decided to hold Fullerton's leadership seminar in Bangkok," he said.

"There is such a hunger for retail financial education here, and people actually need it in order to see how they can create different sources of income."

In the brokerage world where an acceptable speed of execution is between 350 and 500 milliseconds, Mr Singh's way of winding down is to take his family out for a walk or go for a run, but playing snooker or pool is what he does for fun.

At 41, and after years of being glued to computer monitors, Mr Singh's eyesight is not as sharp as he'd like it to be, but he doesn't need excellent eyesight to continue to do what he loves, which is trading and education. What one does need, he says, is vision.

"Number one, vision is important. Number two, vision gives me the picture of what I want; strategy is how I get there. The last thing is people. I have to find the right people for me to fill those spots and to see how we can execute it to perfection," he says. 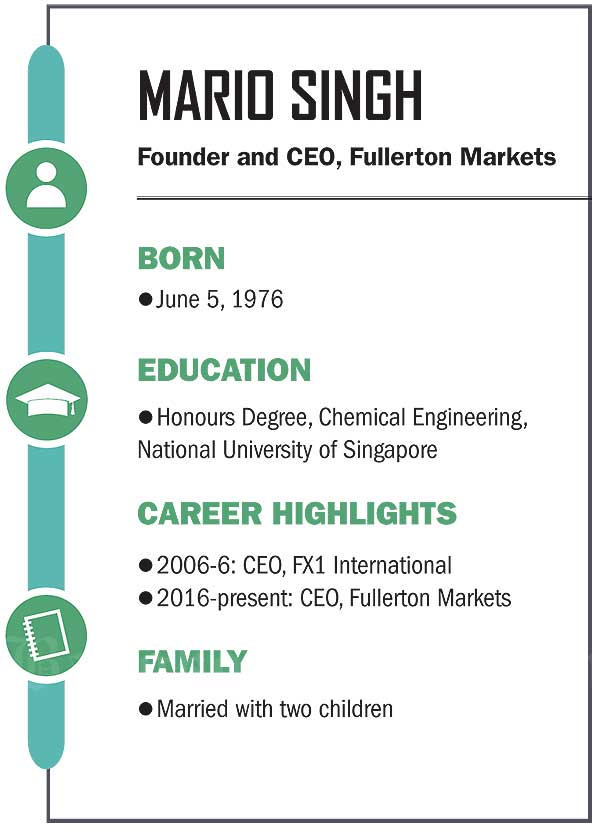