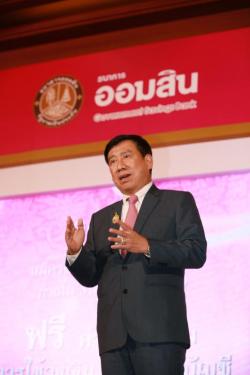 The move is part of the government's policy to inject fresh funds into small businesses to help them stay afloat and beef up their competitive edge.

Krungthai Asset Management acts as a trustee for both funds.

The fund targets startups with high growth potential, those whose businesses support the country's economic growth, SME suppliers to the public sector, large corporations or members of the Thai Chamber of Commerce and SME social enterprises.

According to the government's policy to help access to financial resources for SMEs, the GSB had been tasked with setting up the venture capital funds worth 2 billion baht. The first fund worth 500 million baht has already been established.

The GSB-led fund will be able to inject up to 100 million baht in each SME operator, potentially lending them credit if needed.

The GSB is financing 80% of the venture capital funds and the Stock Exchange of Thailand (SET) is covering the rest.

The funds, with a maturity of 10 years, can have a maximum 49% shareholding in each SME. The funds can exit when firms list on the SET or turn a profit and want to buy their shares back.

The venture capital funds are expected to invest the full 2 billion baht by the end of this year or next, said Mr Chatchai.

The bank's first venture capital fund has already agreed to put 165 million baht into six SMEs, including those engaged in visual effects and drone manufacturers. The bank is also in talks with three other SME operators to invest 120 million baht.

Meanwhile, SET president Kesara Manchusree said 162 firms have so far raised 99 billion baht from listing on the Market for Alternative Investment, a bourse for SMEs, while 23 of them had moved on to list on the SET.

She said Yggdrasil, a visual effects producer in which the GSB-led venture capital fund holds a stake, plans to list on the SET.

YANGON: One hundred days after the military seized power in Myanmar, the nun who pleaded for protesters on her knees in the street says the coup has cast a pall of fear and depression over the country.