Sector's slowest growth rate in five years in May does not bode well for economic recovery.

Card spending growth last month was slowest for cardholders with income of below 20,000 baht a month. KOSOL NAKACHOL

Credit card spending growth slowed to its lowest annual pace in five years in May, adding to signs that household consumption -- one of the country's main economic engines -- is losing steam as middle-income earners turn more cautious.

"What is worrying is the fact that credit card spending growth has started to show signs of decline. Informal industry analysis showed spending growth of below 4% during the month of May 2017, one of the lowest in five years, against a 7% growth seen during the same period of last year," said a source who is familiar with the matter.

May's credit card spending data is due to be officially released by the Bank of Thailand over the next few days. 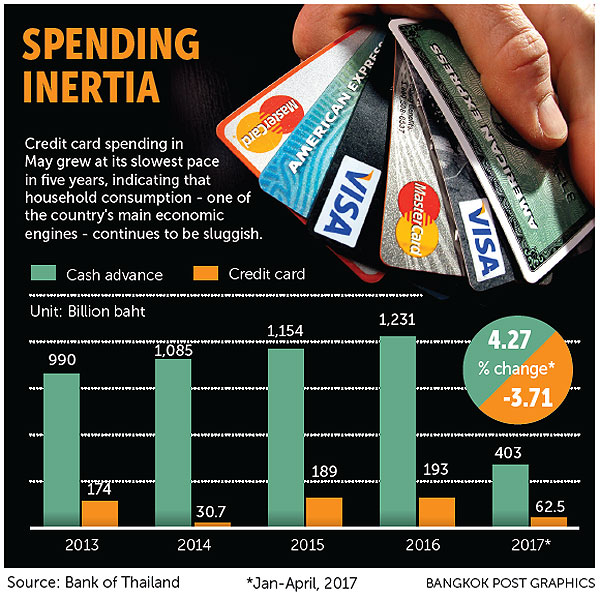 Credit cards account for around 0.4% of Thailand's total payment value, according to the central bank's data.

Card spending growth last month was slowest for cardholders with income of below 20,000 baht a month, the source said. Spending at supermarkets and fashion saw declines, while healthcare, insurance and oil did well.

The amount of credit card cash advances dropped by 4-5% year-on-year, said the source. But the fall did not mean cardholders' purchasing power had deteriorated, just that they were more cautious.

According to the central bank data, credit card spending in the domestic market for the January to April period expanded by a mere 4.3% to 403 billion baht even though the period included the Songkran festival in April, one of Thai consumers' largest spending periods.

At end-April, 19.6 million cards were circulating in the market.

"Although there are concerns about non-performing loans (NPLs), the level is still relatively small and a minor uptick does not worry any card issuers," the source said.

"The industry this year is somewhat slower than last year as consumers still do not have full confidence in the economic recovery," she said, adding that strong recovery in exports has not translated into other sectors, especially private consumption.

"Purchasing power remains sound. We're not sure why people still don't spend, despite the improving economic indicators," she said.

"The improvement in GDP might not reflect spending habits," added Mrs Pittaya.

Spending through KTC credit cards grew 8% year-on-year in the first quarter, and spending growth in the first five months of this year remained in the single digits.

Mrs Pittaya said spending through credit cards in department stores has been sluggish this year, growing 15% in the first quarter, less than the 20-30% growth expected by KTC.

She said the cash withdrawal from KTC's credit cards posted almost zero growth, down from 10% growth recorded in 2016, which is partly due to people are relying less on cash for payment.

Thakorn Piyapan, head of digital banking and innovation at Bank of Ayudhaya (BAY) and head of Krungsri Consumer Group, said as of the middle of June, spending through Krungsri Consumer's credit cards expanded by 6-7% on year, still far below the company's 12% full-year growth target and last year's 8% growth.

Krungsri Consumer is the country's biggest credit card issuer, with 3.8 million or 18% of the industry's credit card base.

"We aim for a 12-13% spending growth this year but would be happy if we could achieve at least 10% growth," he added. BAY expects the overall credit card market to grow around 8-9% in this year.

Mr Thakorn said that credit card spending in department stores has been lower than expected, while spending on luxury goods has also slowed down.

"Normally, people don't spend much in the first half, so we're hoping that the high season in the second half will help boost our growth," he said.

Mr Thakorn said cash withdrawals using BAY credit cards grew at a meagre 2-3% in the first five months of this year, lower than the 4-6% expected by the bank.

Amonthep Chawla, head of research at CIMB Thai Bank (CIMBT), agrees that low growth in credit cards spending in May could stem from cardholders, a proxy of the middle-income earner group, becoming warier of spending amid the uneven economic rebound and rather than diminished purchasing power.

Even though improving farm income since the first quarter has been a boost for those who are at the bottom rung of economic ladder, most of the windfall has been used to repay debt, limiting the spillover effect to middle-income earners, he said.

The first drop in consumer confidence in six months -- to 76 points last month from 77 in April -- underscored weak consumption.

"I think it [cutting credit card spending] bodes well [for the economy] as it results from prudent spending, as salaries increase at a low pace or not at all in some cases. Weak consumer confidence and banks' tightening [credit] also played a role in reducing card spending," he said, adding that consumers, middle and high-income earners in particular, are ready to spend if the lingering uncertainties fade.

Household consumption accounts for 55% of the country's economic value.

Mr Amonthep forecast that GDP will come in at 2.9% year-on-year for the April-to-June quarter, compared with the first quarter's 3.3% reading, due to tepid private investment and consumption.

However, improving private investment in the second half and export growth will accelerate the economic growth and help full-year GDP reach 3.2% as forecast by CIMBT, he said.

"Despite slow growth in credit card spending, I still believe household consumption is on the upward trend," Mr Porametee, citing the private consumption index which rose for a second straight month in April supported by higher farm prices. "Myriad positive factors have surfaced."

Spending via credit cardholders accounts for only 4-5% of total spending.

According to the Bank of Thailand, the private consumption index rose 3.6% on-year in April, up from 2.8% in March and against 4.5% in February and 2.2% in January.

However, according to the latest forecast of the government's planning unit, private consumption for the whole year will remain relatively low at 3% this year.

He said the anticipated continued recovery in private consumption is attributed to recovery in spending on cars, motorcycles and services such as restaurant and domestic tourism, which are expected to see strong growth this year.

But the growth in private consumption will not be as strong as that in merchandise exports, which have posted better-than-expected results this year, said Mr Don.

"I would define the Bank of Thailand's economic outlook for this year as an export-led-recovery, while next year will see a revival in domestic demand," he added.