A condominium construction site in Bangkok. A former central bank governor is the latest to issue warnings about the property sector, plus strong words about cooperatives as well. Weerawong Wongpreedee

Former Bank of Thailand governor Prasarn Trairatvorakul has flashed a warning that cooperatives and an unbalanced property sector will be the sources that trigger a new financial crisis if regulators fail to tighten rules and regulations in a pre-emptive move to keep problems from spiralling out of control.

A large number of thrift and credit cooperatives are not members of the National Credit Bureau and thus cannot check their potential borrowers' credit risks, Mr Prasarn said in a seminar entitled "20-Year Tom Yum Kung Crisis: Back to the Future".

Such non-members also do not set aside reserves as a buffer against soured loans, he said.

Imprudent lending and embezzlement at credit unions and thrift and credit cooperatives have stolen the limelight in recent years. 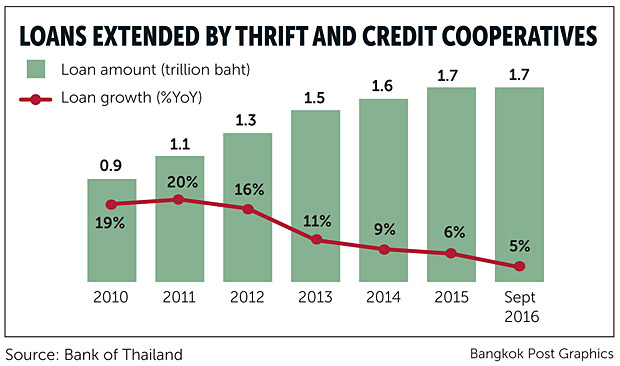 The Klongchan Credit Union Cooperative (KCUC) is reportedly involved in a 13-billion-baht embezzlement scandal; the Khehasathan Noppakao Ruamjai Cooperative (KNRC) was ordered closed after a sum of 5.5 billion baht went missing from its accounts; and the Chulalongkorn University Savings Cooperative (CUSC) is estimated to have lost 1.4 billion baht from fraud.

In a low-interest-rate environment, depositors who hunger for high-yielding deposits park their money into credit unions and cooperatives, though deposits in these cooperatives are not protected by the Finance Ministry and the Deposit Protection Agency (DPA).

At present, all cooperatives are regulated by the Agriculture and Cooperatives Ministry.

Mr Prasarn pointed to an oversupply of property in some areas.

"The new crisis can come in new model," he said. "It won't repeat the same problem as it was the past."

Even though the crisis has yet to arrive, all related parties should be cautious and proactive to head off such a crisis, Mr Prasarn said.

The 1997 Tom Yum Kung crisis was caused by many factors, he said: "We were too complacent, arbitrary and capricious. Misunderstanding that our economy was strong, doing things that imbalance and led to crisis.

"From the lesson, we've learned our weaknesses and pretty well fixed these points. But a crisis can re-emerge. At this point, we must closely oversee thrift and credit cooperatives, state-owned financial institutions and unbalanced investment in the real estate sector.

"Even though the magnitude of these problems has not spiralled into crisis, we should not be reckless and should solve the problems in the early stage."