In this Oct 27, 1997 file photo, a taxi driver walks through hundreds of taxis taken out of service to save operating costs in Bangkok. (AP photo)

It's been 20 years since a financial meltdown spread through much of Asia, wrecking economies and bringing down governments.

They've long since recovered and, analysts say, are now stronger for the experience. But in Thailand -- the epicentre of the crisis -- the anniversary brings back painful memories for those who lived through it, and lost everything. 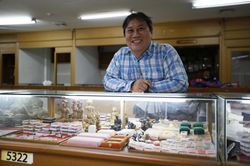 In this June 26, 2017 photo, former tour guide Supop Pavanan, who lost his job in the 1997 massive financial downturn, poses at a shopping mall where he makes a comfortable living selling Buddhist amulets. (AP photo)

''It was like there was no way out for many of us,'' said Supop Pavanan. Today he makes a comfortable living selling Buddhist amulets at his Bangkok shop and over the internet, but two decades ago he was among millions of victims of the great Asian crash.

Thailand's boom of the mid-1990s, fuelled by unrestrained borrowing and a corrupt, lax finance system, collapsed on July 2, 1997, when the government devalued the baht. The currency sank, ruining companies and individuals almost overnight and starting a chain reaction that spread across borders.

Soon, many of Asia's tiger economies were skinned alive.

Recessions struck from South Korea to Indonesia and millions were thrown out of work as investment and real estate bubbles burst, roiling global markets.

''The worst thing was not knowing what would happen to you,'' said Mr Supop, who had been an overseas tour guide but was laid off. He ended up selling fish balls from a street stall and his income fell from $3,000 in a good month to $200, if he was lucky.

He stuck at it for a year before beginning a slow climb back out of the economic depths. 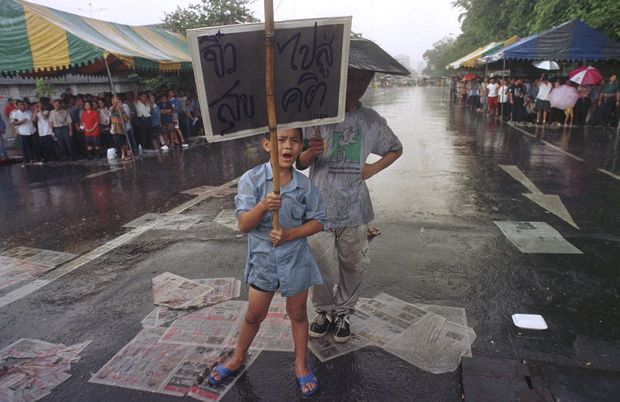 In this Oct 23, 1997 photo, a boy calls for the resignation of Prime Minster Chavalit Youngchaiyudh for the poor handling of the Asian financial crisis outside the Government House in Bangkok. (AP photo)

Anger grew as unemployment soared. The government fell. Thailand ended up taking a bailout from the International Monetary Fund.

An exhibition at Bangkok's Museum Siam recalls those grim days. Artifacts convey the pain of ordinary people: A Buddha statue that a businessman confided in because he couldn't face telling his family of his ruin. An office phone over which a woman learned that her bankrupt boss had killed himself. 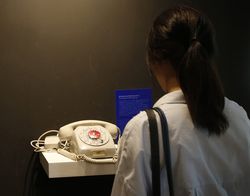 In this June 7, 2017 photo, the office phone over which an employee heard that her bankrupt boss had killed himself is part of an exhibition marking the 20th anniversary of the Asian financial crisis at the Museum Siam in Bangkok. (AP photo)

''I experienced it but wasn't severely affected because I was still in school,'' said Taweesak Woraritruengaurai, the exhibition's curator. ''But when I got to see all these things that are full of stories, I could feel how real it was and how much it affected many aspects of life. It affected people very deeply.''

Today, Thailand's banking and finance sector seems more secure. Experts say crucial lessons were learned in 1997. The chances of a rerun, they say, are slim.

When the global crisis struck a decade later, Asia's financial systems were relatively insulated, with less direct exposure to the toxic subprime mortgages that wreaked havoc on US and European markets.

''I don't think there will be another financial crisis,'' said economics professor Apichart Satitniramai of Thammasat University. ''Firstly, there's a high capital-adequacy ratio, which can support more risk,'' he said, referring to the reserves banks must keep to deal with possible crises.

''Secondly, banks and financial institutions have changed their behaviour drastically, compared to the time before the financial crisis occurred,'' Mr Apichart said.

Thailand and other Asian countries also have bulked up their foreign currency reserves, a key buffer for a country facing economic turmoil because they can be used to defend its currency, provide liquidity and generally shore up financial systems.

Not everyone has moved on. (continued below) 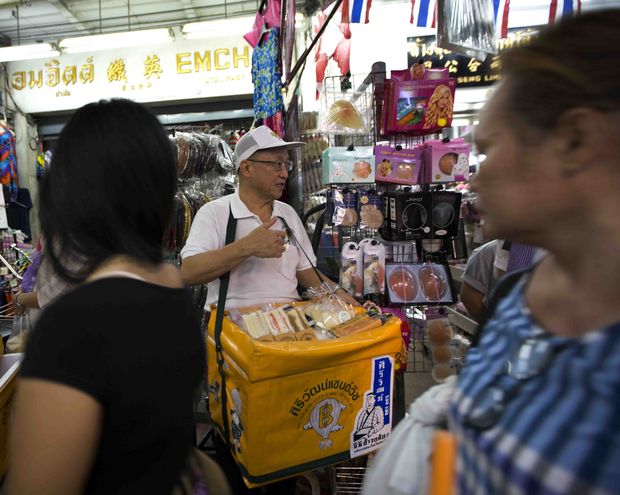 In this June 17, 2017 photo, former successful stock trader Sirivat Voravetvuthikun, who had lost everything in the financial crisis of 1997, sells sandwiches at a market to make ends meet. (AP photo)

In 1997, Sirivat Voravetvuthikun was a successful stock trader, so adept at picking the right stocks that other traders called him ''the Phantom''. After he went bust, he began selling sandwiches from a yellow foam box hanging from his neck. He became famous as a symbol of determination and hope.

Today, he's still doing it. His attempts to grow his food business have failed, leaving him stuck where he landed in 1997. But his will to pull through burns as bright as ever.

He says, ''I am telling myself and others in society, even though the Thai economy is not good, if we keep fighting, cut our costs, do whatever we can, work hard to earn as much as we can, we'll survive and one day the economy will get better.'' 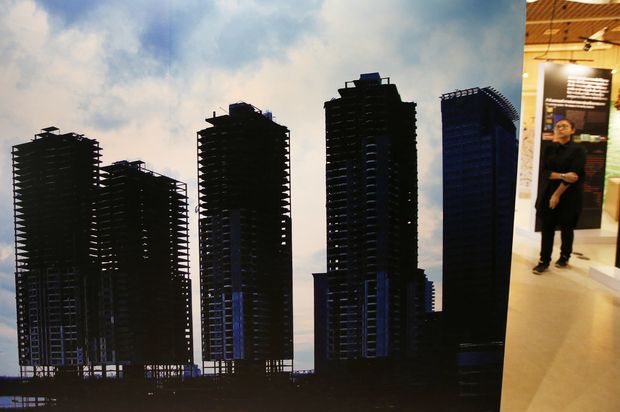 Photos of abandoned and unfinished luxury condominiums are part of an exhibition marking the 20th anniversary of the Asian Financial Crisis at the Museum Siam on Thursday. (AP photo)