Better to give ...
Business

What we are finding, unfortunately in Asia, is a narrowing of the way governments think and a narrowing of the way societies are being made to think. We are turning away help from experts who may have answers or may have addressed some of these social issues in other countries” NAINA BATRA CEO, Asian Venture Philanthropy Network Photos: Tawatchai Kemgumnerd

Asians are generous by nature when it comes to donating to worthy causes. Religious giving is mostly informal but is often the starting point for philanthropy on a broader scale in Taiwan, China, India, Myanmar, Singapore and other countries.

In Malaysia and Indonesia, religious giving through zakat is widespread and often forms the largest pool of grant capital for so-called social purpose organisations. In 2013, zakat represented more than 20% of the Malaysian government's social spending excluding health.

The bigger picture shows that Myanmar, to the surprise of many, tops the global generosity table. The ranking is based on the percentage of people in each country who donate money, volunteer or help a stranger, according to the Charities Aid Foundation (CAF) World Giving Index 2016.

Myanmar led the index for the third year running, followed by the United States and Australia. Thailand ranked 37th out of 140 countries while Indonesia ranked seventh, Malaysia 22nd, Singapore 28th, the Philippines 47th and Vietnam 64th.

Donating money is the most common form of giving in Asia. In Myanmar, for example, 90% of donors prefer to give money while 63% choose to help a stranger and 55% volunteer their time for causes they believe in.

CAF believes the high scores in Myanmar reflect the prevalence of Theravada Buddhism, with most adherents practising sangha dana, or giving to those who pursue the monastic life.

Religious giving is deeply ingrained in Asian cultures and has contributed to steady growth of social enterprises, but there is little accounting for how the money is spent. In Thailand, asking such questions before making a donation, or tum tarn, is actually frowned on.

Trust in religious institutions and reluctance to question authority figures, of course, has led to many people being scammed by con artists or monks who distort teachings for their own personal gain. As well, vast sums of donated money go to building ostentatious temples when the funds might be put to better use supporting education or community development.

As a result, the region suffers from a lack of genuinely impactful social investment, and there is a need to change the mindset about how and why we donate.

In Thailand and neighbouring countries, people are conditioned to believe that the best way to make merit is to give without wanting anything in return. By asking where your money is going, you might seem to be wanting something back, hence the mindset dilemma.

The general absence of questioning has also resulted in a lack of proper performance measurements for non-governmental organisations (NGO). As well, the absence of collaboration between different public and private players that are trying to do good for society reflects a relationship problem facing the philanthropic scene in Asia and Thailand.

"The charitable giving culture in Thailand is highly concentrated in religion and education while charity is oriented toward 'doing good' rather than creating changes," said Dr Somkiat Tangkitvanich, president of the Thailand Development Research Institute.

"Lots of non-profit organisations are generally fragmented, social enterprises are having difficulty scaling up their activity, and many companies still lack clarity on how best to conduct their corporate social responsibility activities," he told around 700 philanthropists and social investors who attended the Asian Venture Philanthropy Network (AVPN) Conference in Bangkok last month.

The TDRI has suggested that the Thai government delegate more responsibility to local administrations to provide public services that better fit local needs. As well, it should allow the business sector to provide more social services, and encourage the social sector to invest more and undertake comprehensive reforms to make all of this possible.

The CAF, meanwhile, offers universal recommendations for governments, which include making sure that NGOs are regulated, making it easy for people to give and offering incentives for giving where possible, promoting civil society as an independent voice, respecting the right of NGOs to campaign and ensuring that they inform the public about their work. 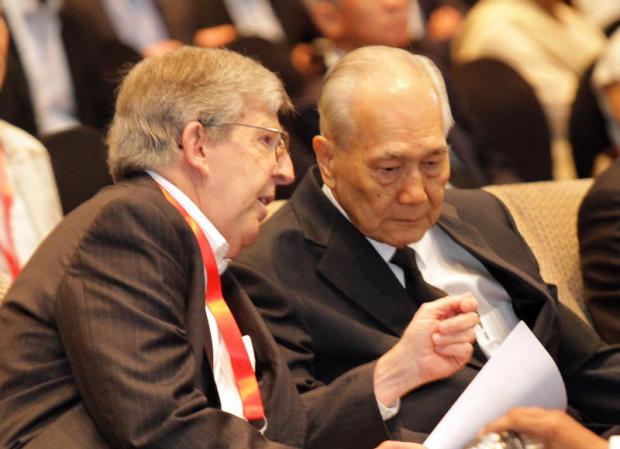 According to the AVPN, the lack of collaboration among the social, corporate and government sectors is impeding social development in Thailand and the region, where impactful social investment is still needed to address many challenges.

"Unless and until you come together, you will not realise the scope of what you can do," Naina Batra, the chief executive officer of AVPN, told Asia Focus.

Philanthropy, social investment and CSR activities are still needed in Asia. While poverty reduction across most countries has been impressive, over a quarter of the people in India, Myanmar and Cambodia remain below the poverty line, according to the United Nations.

But where there is demand there are suppliers, as AVPN's "Social Investment Landscape in Asia" report on 14 social economies reveals. They are China, Hong Kong, India, Japan, South Korea, Taiwan, Cambodia, Indonesia, Philippines, Malaysia, Myanmar, Thailand, Singapore and Vietnam.

The report identified 240,000 active NGOs in 13 economies, while India stands out with some 3.3 million active NGOs. Meanwhile, there are 233,000 social enterprises (SE) in other countries and 2 million in India.

Harnessing the potential of all these organisations for the greater good could lead to much more impactful social investment. And while auditing temples might present a cultural barrier, as Dr Somkiat delicately put it, he sees no problem with applying cooperative key performance indicators (KPI) and getting do-gooders to work together more effectively.

Creating truly effective social investment from donations and promoting greater philanthropic collaboration are not new goals, but they are becoming a bigger challenge with the growing number of players in the region, given that most of the 14 economies studied by AVPN are still in their growth phase.

SEs in the region are still in their early to mid-stages of growth where viable pipelines are small and deal volumes are low. The emergence of local funds is the current trend in developing social economies as it brings local capital and expertise to engage with social impact.

Most Asian grant makers also tend to focus on their home countries because of challenges in cross-border giving that include a lack of financial incentives, language barriers and higher operating costs. These obstacles pose challenges for collaboration and cross-border giving, while the increase in global protectionism and anti-globalisation views is not helping.

"We are turning away help from experts who may have answers or may have addressed some of these social issues in other countries. For example, China and India have been very reluctant, all of a sudden, because of changes in government, to let foreign foundations come in to help them and partner with local foundations in giving them access to the best-quality models and access to new technology in addressing their social problems."

A lot of governments in Asia also perceive outside help as meddling in their internal affairs, or see philanthropy as being not completely altruistic but as a factor driving social unrest. 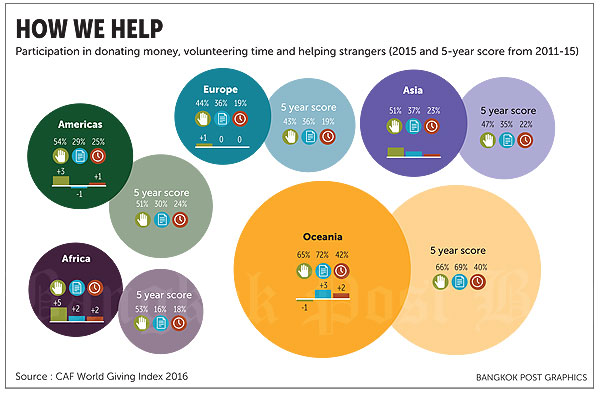 To maximise social impact, it helps if a campaign or programme can attract a number of different players who each bring in different kinds of resources, making the whole greater than the sum of its parts.

Technology is starting to help, especially the rapid growth of digital connectivity, smartphone ownership and mobile internet access. Basic services can now be delivered quite cheaply to remote communities in places such as Indonesia, Myanmar or northern Thailand.

"Mobile technology and internet penetration can now provide quality ... education and healthcare solutions, and without harnessing technology there is no hope because it is the most cost-efficient way to scale up," Ms Batra noted.

Maximising the impact of donations is also critical, says the Epic Foundation, a New York-based non-profit aiming to improve charitable giving. It promotes the concept of monitoring and cooperation (M&C) instead of the traditional monitoring and evaluation (M&E) of NGOs.

Of the 3,000 NGOs that Epic surveyed, only half produced annual reports, according to Nicola Crosta, the foundation's executive vice-president. Consequently, the first step to making an impactful investment via grant making is to do due diligence on the organisation that you want to fund.

Epic helps prospective funders set up a quarterly monitoring system with a webpage of flagship indicators that are defined, plus a guarantee by both donor and NGO to discuss what is going to be measured. In return, the NGO will receive funding with no restrictions. AI and Big Data then take over to effectively measure the changes in performance.

"Many NGOs do not believe us at first because they question the policy of unrestricted funds without telling them what kind of projects the money should be put into, but once they get into the process they realise that unrestricted funding does not mean unaccountable," Mr Crosta said.

"This is the only way as a donor to really know what happened with your money, because if you only worry about a specific project you will not understand what the [NGO] is really doing. For the couple of years that we have been doing this, what is interesting is that the most robust, honest and impactful organisations almost all enjoy the system."

While the M&E approach has always been seen as a headache for NGOs, he said, the M&C system allows them to have direct conservations with donors and is almost like a consultancy. This helps them to improve performance and ultimately, the lives of people.

Helen Smith Price, president of the Coca-Cola Foundation, which has given $820 million to local communities worldwide since 1984, reaffirmed this view. In Myanmar, for example, it has worked with Pact, one of the longest-serving international NGOs in the country, investing $6 million to promote women's entrepreneurship and clean drinking water programmes since 2012.

"What we know and understand is that collaboration matters," she told Asia Focus. "I don't think just any one entity can help solve the problems that are happening in the community. It takes all of us to figure out how to address and resolve some of those issues." 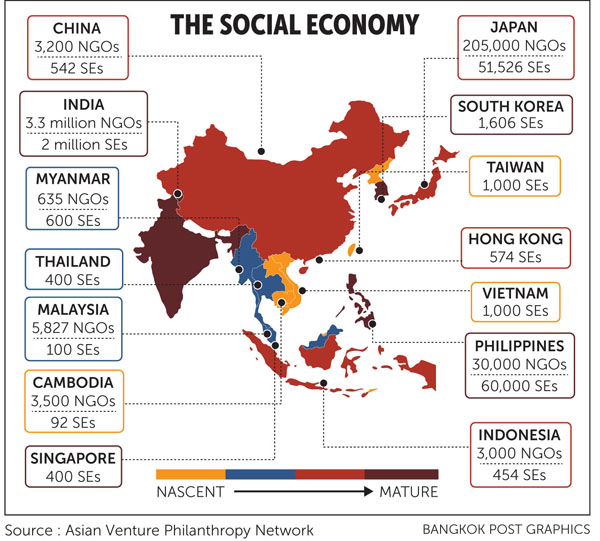 BEIJING: China said on Thursday it had suspended an economic agreement with Australia, in an apparent tit-for-tat response to Canberra's scrapping a Belt and Road infrastructure pact and threat to undo a deal leasing Darwin Port to a Chinese company.