The National Broadcasting and Telecommunications Commission (NBTC) yesterday approved the 920-925 megahertz spectrum to be used for the Internet of Things (IoT) as the regulator seeks to promote the local IoT ecosystem. 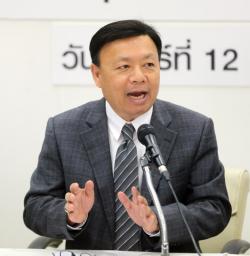 The move meets a Transport Ministry request from early 2016 for the NBTC to allocate bandwidth on the 800-900MHz spectrum for a wireless railway communication system.

According to NBTC secretary-general Takorn Tantasith, the approval is part of the spectrum allocation arranged by the regulator.

The board concluded the 920-925MHz spectrum is the best unlicensed band to promote the IoT ecosystem in Thailand due to its vacant range, and the fact it is not under a concession.

The NBTC's working panel has conducted extensive research on IoT service platforms and licence regimes since last year. The panel expects to approve usage of the 920-925 MHz band for IoT purposes by the end of this year.

Looking at previous studies, Mr Takorn said the NBTC needs to clarify two areas: the spectrum for the IoT service that should be unlicensed; and which licence IoT service providers have to apply for from the NBTC.

Further clarification is needed to separate unlicensed IoT service spectra from IoT service providers who have yet to apply for a licence to operate internet services, he added.

All companies that plan to provide IoT services must hold an internet licence approved by the NBTC.

A source at the regulator's working panel said IoT service providers are likely to be regulated under the NBTC's internet service licence. Recent reports suggest that, globally, there will be 20 billion IoT-enabled devices by 2020.

These can facilitate various operations such as product traceability in logistics, smart car mechanisms and healthcare.

The NBTC said the high-speed train project must begin using the 850MHz and 400MHz spectrum bands by 2020 to receive government approval as DTAC's mobile concession expires next year, after which the spectrum will become available.