Backbone of economy is crippled by lack of innovation, weak demand and dearth of loan, say analysts. By Post reporters

Even though financial help is offered by several banks and institutes, it is still difficult for small operators to access loan. TAWATCHAI KEMGUMNERD

Small and medium-sized enterprises (SMEs) are considered the backbone for propelling economic growth.

But a new chapter unfolding in the chronicle of SMEs has a rather dismal narrative as they too are feeling the pain of limited financial assistance and prolonged economic wobbles.

There appears to be no end in sight to their struggles as the pace of technological changes has proved too much to handle for many SMEs that are not particularly innovative. State aid has provided somewhat of a lifeline to these businesses, but it is by no means, an elixir to restore their deteriorated vigour.

The health of rural SMEs is dire condition, as these companies lack the innovative business acumen needed to enhance performance, while tepid consumer demand rubs salt in the wound by keeping a lid on growth.

"Thai SMEs are suffering as they mainly rely on purchasing power in local areas, whereas big companies rely more on exports, which have seen strong recovery in the recent period," he said.

Provincial private consumption showed some signs of recovery in the first three months of this year, but then weakened again in the second quarter as agricultural prices started to drop.

"Normally, SMEs are mostly worried about operation costs, as it is a factor that is beyond their control, but we have started to see sales as their utmost concern since late last year," said Mr Benjarong.

Mr Benjarong's comments echoed former finance minister Thanong Bidaya's remark that SMEs in rural provinces are in deep trouble as they suffer a double-whammy from a lack of innovation and lukewarm consumer demand.

Economic slowdown over the past few years held Thai SMEs back from investing to improve efficiency, adding to the sector's structural woes that contribute to a lack of competitiveness.

Mr Benjarong said that measures to improve SME access to bank loans are important to keep these businesses going, although it needs more than just loans to help them recover.

"In order to help these SMEs recover, the government should focus more on how to revive consumption in provincial areas," he stressed.

"The implementation of spending stimulus measures will only benefit businesses in big cities, so the government should find a way to shift consumption to provincial areas where Thai SMEs are operating in."

Although the government has poured billions of baht to help increase Thai SME liquidity, most of them remain non-competitive and some have gone bankrupt.

Industry officials said persistent structural problems in commercial banks' antiquated loan-evaluating processes and SMEs' failure to adapt to changing contexts are to blame for the failure of government assistance to SMEs.

Chen Namchaisiri, Federation of Thai Industries (FTI) chairman, said the government has been on the right track in providing several supportive measures to SMEs, largely by offering loans to enhance liquidity and competitiveness.

However, most Thai SMEs have still failed to keep up, making the policies seem ineffective.

"It is good that the government has issued many measures to help the SMEs. However, it will take time to gauge whether the measures have been able to accomplish the intended goals," said Mr Chen.

He said loan access remains a major problem for Thai SMEs, along with their failure to adapt to change, particularly when expanding overseas.

"Most SMEs are small businesses that are vulnerable and face multiple risks as they are small and have limited cash flow. This also limits their ability to expand and their ability to survive. However, banks are unlikely to understand these risks. They hardly approve loans as they check every company thoroughly because they do not want to take any risks," said Noppong Teeravorn, president of the Federation of Thai SME Association (FTA).

This is why all government financial aid in the form of soft loans extended to SMEs through commercial banks have failed to reach these struggling companies, he said.

The FTA comprises 130 associations related to SMEs in Bangkok and surrounding areas -- around 14,000 companies. The total number of FTA members is registered to around 3 million companies nationwide.

"The government's idea of financial help through loans to SMEs is very good, but the approach taken by those behind the lending process needs to change. They have to be more flexible," said Mr Noppong.

Under the existing loan criteria, banks normally lend to SMEs fewer risks. This leaves many SMEs, which are mostly micro-sized companies shouldering greater risks, with no help.

Ladda Sampawthong, president of the Restaurant Business Trade Association, concurs, saying that government financial aid is difficult to access through the loan pipeline.

The size of most SMEs in the restaurant sector is very small and most of them do not have or even understand the concept of business models, while lacking competitiveness and business development, she said. Essentially, all these attributes result in a perceived lack of trustworthiness. 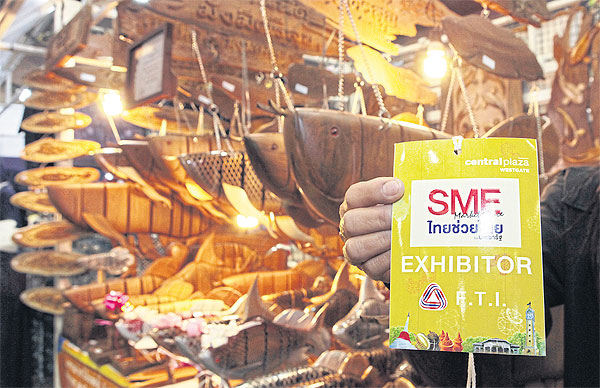 An SME fair is held in Bangkok to support the small business sector, a key engine helping to drive Thailand’s economy. TAWATCHAI KEMGUMNERD

Lack of impetus for recovery

Despite mounting complaints from SME actors, there are sensible reasons behind limited loan approvals, with soaring debt being the buzzword.

The harrowing experience that saw nearly half of all loans turn sour during the 1997 financial crisis also encourages banks to squeeze credit to small businesses, which have more limited financing tools than larger firms, amid the rise in SME loan delinquency.

SMEs have been in a financially crippled condition over the past few years because they have spent lavishly on expansions and keeping high inventory, said Mr Patchara. These businesses have taken another blow from the recent steep fall in commodity prices and uneven economic recovery.

"Amid sluggish economic growth, there is no impetus for SME recovery. GDP must achieve 5% growth revitalise the segment," he said.

Kbank, the country's largest commercial lender for SMEs, has kept its guard up by tightening fresh loan approval in the SME segment.

The bank's SME loan portfolio amounted to 657 billion baht at the end of March. It targets SME loan growth at 4-6% this year.

Kbank was among the lenders that set aside higher reserves to cover loan losses related to SMEs, with the bank's net profit eroding in the second quarter as a result.

The country's fourth largest bank by assets posted a 4.67% year-on-year decline in net profit to 8.99 billion baht for the April-to-June period, while impairment charges surged by 21.6% year-on-year to 10.6 billion baht.

Soured SME loans for commercial lenders ticked up to 4.48% of total loans at the end March, up from 4.35% in last year's final quarter, according to Bank of Thailand data.

Special mention loans, 30 to 90 days past due, also edged up for SMEs, to 2.54% at the end of March from 2.47% at year-end 2016, adding to the possibility of a persistent rise in soured SME loans and explains why lenders' appetite to extend new loans to the sector remains weak.

As the torrent financial and economic woes have hit SMEs hard, failure to innovate is inflicting more suffering among small businesses with little innovation.

Small and Medium Enterprise Development Bank of Thailand president Mongkol Leelatham said it is difficult for SMEs that do not apply innovation or technology to survive as consumers have become more sophisticated and distribution channels, especially online one, are becoming more diversified.

The state-owned bank is offering three cheap-rate loan schemes to help SME operators to upgrade their operations, he said, adding that there were applications for the loans worth 28 billion baht in the second quarter.

Under the current circumstances, it is crucial for small SMEs to transform themselves. Any businesses remaining in the 1.0 era, defined by Thailand's military-led government as a development phase in the agricultural sector, will face growing difficulties to adapt.

A major obstacle preventing Thai SMEs from expanding business overseas is the lack of language ability, according to Mr Chen at the FTI.

"The domestic market is getting smaller as the number of competitors rises. That's why we have been trying to encourage Thai SMEs to go abroad to tap into a wider customer base. However, most of them have failed to penetrate [overseas markets] and even chose to not go abroad because they lack foreign language skills," said Mr Chen.

These limitations leaves them struggling to survive in the domestic market, where there is limited liquidity and smaller market share, not to mention smaller profit margin.

But what is more disheartening is the snub on self-reliance. This is a crucial factor that is embedded in Thai SMEs' mindset and needs to be washed out, as they normally wait for help and support measures from the government, instead of trying to seek opportunities on their own initiative, Mr Chen said.