Suvit Maesincee, the Prime Minister's Office Minister, is one of the key architects of the much-touted Thailand 4.0 scheme -- the country's national strategy focused on added-value, high technology and innovation. He also plays a key role in implementing ongoing socio-economic reforms. Mr Suvit recently sat down with the Bangkok Post to talk about the latest developments in the country's transformation drive. 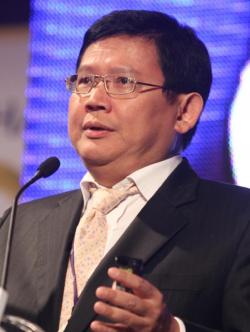 The bureaucratic system should be modernised and red tape cut, says Mr Suvit.

What is the next step for the implementation of Thailand's economic and social reforms?

In order to be more efficient, the government will ask for cooperation in implementing the reforms from the private sector under the Pracha Rat public-private collaborative model.

PTT president and chief executive Tevin Vongvanich will take charge of the ease of doing business component, and legal guru Borwornsak Uwanno, secretary-general of the King Prajadhipok Institute, will give legal reform advice.

For which sector should reforms be implemented first?

The Committee for National Reform, National Strategy and Reconciliation agrees that without bureaucratic reform, it's not easy to drive the nation to achieve the Thailand 4.0 initiative or the ambitious 20-year national strategy plan, or even education reform.

The joint meeting among private sector players will be held soon to gather feedback on how the reforms are being implemented.

Gen Prayut also authorised at a recent committee meeting that bureaucratic reforms be accelerated first, demanding that progress be made within six months.

The bureaucratic system should be modernised and more accommodating, cutting out red tape. The new bureaucracy or 'Thai bureaucracy 4.0' should be highly efficient and of high-calibre to support Thailand 4.0, because new national agendas such as ageing society and digital government will play very significant roles in the country's development.

The Office of the Public Sector Development Commission will be tasked with acting as a core state agency to implement bureaucratic reform.

State agencies, meanwhile, will be required to revise their duties and their services in three months and submit their revisions to the commission.

The state agencies should focus only on necessary tasks, while relegating unnecessary jobs to third parties or outsourcing units. An initial survey showed that 30-40% of the current bureaucratic services can be transferred to outsourcing units.

What is the progress of government services in facilitating the ease of doing business?

Referring to the ease of doing business, the government still needs to set up a one-stop service centre for business registrations, which requires an investment of 1.4 billion baht in software to link up the computer systems of state agencies.

The one-stop service centre will also allow the general public to contact the government via the internet. Under the concept of Thailand 4.0, the government thus needs to become digitised.

But the development of a big data state management system has been delayed. The government is committed to setting up the system this year, because 'digital government' and 'big data' will help create more transparency. State agencies are also required to coordinate on workforce development and cutting expenditures.

Existing resources of the central administration may be needed to transfer more to provincial counterparts and local administrations, especially in the border provinces, where big cities will be developed thanks to border trade, investment and the presence of special economic zones.

Thailand should be promoted more as a gateway to Cambodia, Laos, Myanmar and Vietnam. More cooperation can strengthen Thai entrepreneurs' competitiveness, while upgrading the income of neighbouring countries.

How does the government improve the new key performance indicators (KPIs) among state agencies?

The existing KPIs for state agencies are not practical because each agency has introduced its own. The existing KPIs also do not reflect the expectations of the general public and private sector.

The new KPIs should be upgraded to become strategic KPIs that conform to the 20-year national strategy and national reforms.

How is the government helping drive reform?

The campaign to raise public awareness is expected to be implemented this year, while the special projects include the development of a watershed in Nan and the public-private investment plan for a mass transit project in Khon Kaen.

Those projects will later be extended to other provinces if they are successful.