Optimism about a new pact
World

Optimism about a new pact

The government expects a free-trade pact between Asean and Hong Kong to be signed by the end of this year, a move that will enhance trade and investment in the region. 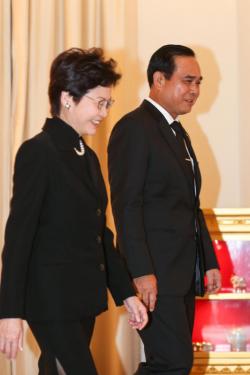 The goal is to conclude and sign the pact this year.

Mr Somkid said Hong Kong perceives Thailand as the centre of Asean and thinks the pact will help reinforce Hong Kong as the premier gateway to mainland China, boosting trade and investment across Asia and the world.

Thailand hosted the July 30-31 meeting of the AHKFTA negotiating committee in Bangkok.

According to Mr Somkid, the upcoming meeting of AEM-Hong Kong, China Consultations in September is expected to declare successful talks on the pact.

A final agreement on the AHKFTA is highly likely at the 31st Asean Summit meeting, to be held in the Philippines.

The AHKFTA covers elements related to trade in goods and related issues such as tariffs, rules of origin, non-tariff measures, customs procedures and trade facilitation, trade remedies, technical barriers to trade, and sanitary and phytosanitary measures.

It also touches on trade in services, investment, intellectual property rights, dispute settlements, horizontal and institutional issues, economic and technical cooperation, and other areas of interest to be mutually agreed upon.

Hong Kong is Thailand's ninth-largest trading partner. In 2016, intra-trade amounted to US$13 billion (432.1 billion baht), while the Board of Investment approved 32 projects worth 8.6 billion baht for Hong Kong investors.

According to Mr Somkid, the free-trade agreement, once in force, will let Asean use Hong Kong as a goods distribution centre, particularly to China.

Hong Kong has a closer economic partnership agreement with China, which allows 1,819 items to be imported from Hong Kong into the mainland with 0% tariffs.

Asean will also have the opportunity to upgrade service standards and gain greater access to financial sources in Hong Kong, particularly for financing infrastructure development.