Campaigns against shark fin consumption are having an impact, but other aspects of the bloody trade continue to thrive.

"Sharks are being killed in every single ocean all around the world, by every country and by any fisherman," says Gary Stokes of the international conservation group Sea Shepherd.

With the global value of the shark fin trade estimated to be just over US$1 billion, and the entire shark market much more, the butchering of the "doctors of the sea" forms part of the large illegal wildlife trade market.

"The illegal trade in wildlife is estimated to be near $20 billion a year, with only trafficking in drugs, arms and people thought to be more profitable," explains Peter Knights, the founder of Wild Aid.

It is believed that nearly 100 million sharks are killed every year for their fins. The numbers of some species of shark have declined by 98% over the last 15 years, with some nearing extinction.

At a recent Wild Aid event in Bangkok, the environmental organisation and its managing director, John Baker, explained their latest findings on the shark finning industry in Asia, and Thailand's continued and increasing involvement in the practice.

"The practice is particularly cruel: the fin is sliced or roughly sawn off and the shark is discarded back into the sea, still alive, where, gravely wounded and unable to swim, it bleeds to death," Josie Raine of the counter-trafficking organisation Freeland told Asia Focus.

In around 30 countries, and the European Union, the practice is illegal or faces strict restrictions, while many endangered sharks are protected completely.

When the catch is brought to shore, the fin is stripped, boiled in chicken broth and usually bleached. A tasteless piece of meat, it is used to add texture, most often to the widely consumed shark fin soup. The largest market is in Asia, specifically Singapore, Hong Kong and mainland China.

Wild Aid's Mr Baker describes it as a "social issue", influenced in part by the perceived prestige factor of shark fin soup. "This is the main reason people are consuming it. It is no different from any other fish soup you can buy on the street."

The world's largest consumer of endangered wildlife products, China is also the largest market for shark fin soup. Misleadingly referred to as "fish wing soup" in Mandarin, the dish is easily available and often served at weddings or banquets.

However, recent reports illustrate the apparent decline in shark fin consumption in China. A Wild Aid investigation in 2014 reported an 82% decline in sales reported by shark fin vendors in Guangzhou, while 85% of Chinese consumers surveyed online said they had given up shark fin soup.

The Chinese government itself is helping stamp out the practice. "The government of China has been very supportive," acknowledges Mr Baker. Wild Aid has successfully carried out a number of awareness campaigns featuring prominent celebrities to educate the public. Six Chinese airlines are among 30 global carriers that ban the transport of shark fins on their flights.

It would appear, then, that the tide is turning. But, argues Mr Stokes, "this is one of the big misconceptions of the industry".

Mr Stokes is the Asia director of Sea Shepherd, a direct action and law enforcement organisation that patrols the oceans to ensure international laws are obeyed and illegal fisherman are stopped and punished.

He paints a picture of a shrewd and dark underworld, one that continues to illegally capture and kill sharks at an alarming rate.

"One big thing about this industry is that they are great marketers. They can create a market for anything," he told Asia Focus. With increased restrictions, bans and surveillance on finning, the industry instead has created different markets for other parts of sharks.

"Shark meat has boomed, chefs have got creative and new markets have formed. It's all about marketing." In Australia, the popular Flake and Chips is most commonly Gummy shark or sometimes School shark, which is classified as "vulnerable" and "endangered" by conversation bodies.

Catching some species is not illegal in certain waters, and many vessels have been accelerating their fishing, not just for fins but entire sharks.

"Then, the cartilage industry sprang up," Mr Stokes explains. "There came this idea that sharks can't get cancer, but we have pictures of sharks with cancerous tumours." Regardless, the cartilage market quickly turned into a million-dollar industry. "If we stopped shark finning tomorrow, sharks would still be in trouble, now we have all these other massive industries."

Sharks are listed in CITES (the Convention on International Trade in Endangered Species). One type is already listed in the CITES Appendix I, the category for species threatened with extinction. Under this list, commercial harvesting and trading are illegal and catching is only permitted in exceptionally licensed circumstances. Eight other types of shark are classified under Appendix II, which includes species not necessarily threatened with immediate extinction, but in which trade must be tightly controlled and research must be conducted to ensure that catches are sustainable. 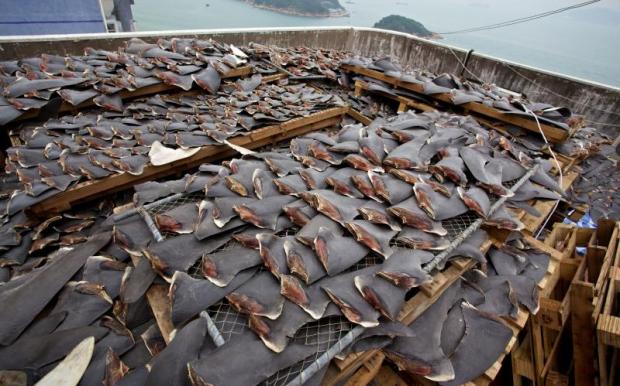 Even if the fin trade is slowing, sharks are being exploited in new ways and remain vulnerable, say conservationists. Photo: Gary Stokes, Sea Shepherd

"The big problem is that nobody follows those rules," says Mr Stokes. "When you open a container, and there's thousands of fins, how can you tell which is which? You have no idea what species they are, no idea where they came from or how they were caught. There's nothing stopping you from putting in some endangered Hammerhead fins in the sacks."

Mr Stokes himself does not believe the market for shark fin has decreased. Based in Hong Kong, he describes seeing massive shipments continuing to come in daily. "I conducted a three-month investigation from December 2016 and was down at the docks every single day, documenting shipping coming in. This was then when it all hit the fan."

The giant shipping line, he says, had been misled. "I looked into it, and these traders were labelling it as something else, as dried seafood or as marine products, something vague".

No more than two weeks later, he found another Maersk container with the exact same contents. "The reality is that there are massive shipments of fins still coming in and it's opened a can of worms."

China, he says, "has a lot of problems" but it is trying to crack down on illegal finning and fishing. Last year, the Sea Shepherd vessel Steve Irwin found six Chinese vessels in the Indian Ocean fishing sharks illegally with drift nets.

"We reported them to China and everyone said, 'China won't do anything, China doesn't care.' But they do and they're actually doing a hell of a lot of work," says Mr Stokes.

"We followed one of the ships all the way back to China and when we got near the Spratly Islands two Chinese warships appeared," he recalls. The captain of the illegal fishing vessel radioed one of the warships and claimed he was scared for his life, claiming a pirate ship was chasing him. "The warship responded: 'They're an environmental group, where have you been and what have you been doing?'"

The suspect fishermen were ordered back to their home port and the Steve Irwin was instructed to follow them so that Chinese authorities could follow its beacon.

The industry is not in terminal decline yet, though. Consumption of shark fin has fallen in Hong Kong, but Mr Stokes says consumption would only have to go up slightly in China to offset this. "Education is needed in China, which Wild Aid has done a great job of. But the biggest thing that changed in China was the Chinese government."

The ban, put in place in 2012 as part of a broader anti-corruption drive, on shark fin being served at any government event "was the game changer in China ... the trickle-down effect was massive."

As a big part of the market dried up, so did consumption. "One of the shark fin traders in Guangzhou was telling us that his business was down by almost 50%, and the reason he said was because of the Chinese government," says Mr Stokes.

But with new markets being created to counter the increased bans on finning, and illegal mislabelling and smuggling taking place, there remains a lot of work to do.

"I use the Twitter hashtag, #globalsharkproblem, because it is not just a Chinese problem, it is a global problem," explains Mr Stokes. "People say, stop shark finning. No, stop shark."