Tourists use a currency exchange service kiosk in Bangkok. The finance minister is the latest official to downplay the firming baht. (Photo by Phrakrit Juntawong)

The strength of the baht, which last week leapfrogged the Korean won to become the best-performing currency in Asia against the US dollar in 2017, will be short-lived and is not a threat to exports in the second half, says Finance Minister Apisak Tantivorawong.

Mr Apisak pointed to two large foreign investments in Thailand in the first half as supporting factors in the baht's rise.

He said the local currency was driven upward by a deal in which a Taiwanese bank paid 16.6 billion baht for a nearly 36% stake in SET-listed LH Financial Group Plc, the parent firm of Land and Houses Bank, as well as another foreign deal involving an investment in an insurance firm under a commercial bank.

He declined to reveal the insurer's name.

LH Financial Group said in late July that a Taiwanese bank had paid 16.6 billion baht to subscribe to the company's newly issued shares.

Mr Apisak said a trade surplus worth US$1 billion (33.3 billion baht) a month on average also contributed to the rapid rise in the baht.

"Exports in the second half should remain in good shape because most exports are from large companies that have hedged against foreign exchange risk," the finance minister said, adding that some business operators have natural hedging because they import raw materials to produce goods for export. 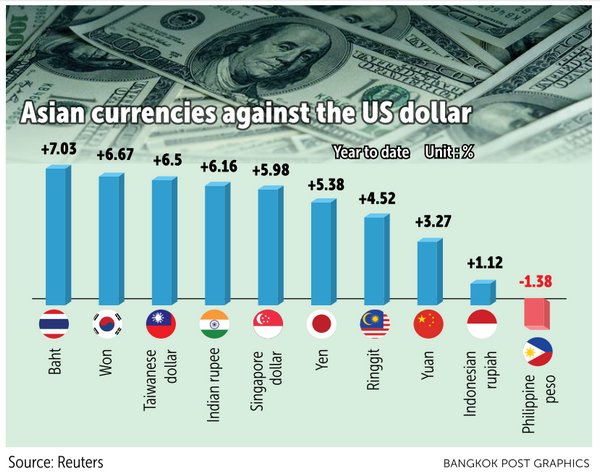 Mr Apisak's comments echoed recent remarks by Don Nakornthab, senior director of the macroeconomic and monetary policy department at the Bank of Thailand, who said the baht's appreciation was not expected to greatly diminish Thai exporters' competitive edge.

Mr Don said the currency's real effective exchange rate -- adjusted for inflation and against a range of currencies of its main trade partners -- had risen only slightly and the central bank had acted on the baht to some extent in a bid to keep the currency in line with regional peers.

The baht is up more than 7% this year. In Monday's trade it touched 33.28 to the dollar, the highest level in more than two years.

Mr Apisak has rushed to allay jitters from exporters, saying he believes the central bank will take care to ensure that the local currency does not strengthen any further against other currencies.

But he voiced concerns about the impact of the stronger baht on small exporters, especially those who use local materials and don't hedge against foreign exchange risk.

Such exporters should hedge their foreign exchange exposure to lock in prices, he said.