An aerial view shows the construction site of a new section of the MRT in Jakarta, one of many major infrastructure projects under way in Indonesia. (Reuters photo)

The 10 members of Asean should keep their promise to make infrastructure investments worth US$700 billion with the Asean-5 (Indonesia, Thailand, the Philippines, Singapore and Malaysia) at the forefront of the drive, say senior bankers at HSBC.

It its Asean Infrastructure Report released in June, the bank forecast infrastructure investments in the Asean-5 alone could reach $705 billion in the next five years, or slightly more than the $700 billion pledged so far by all 10 Asean members from 2016-20, with two-thirds or 65% going into transport projects.

The investments come at a time when the region's economy is picking up momentum in line with improving global conditions. The International Monetary Fund forecasts Asean's combined gross domestic product (GDP) of $2.5 trillion will expand by 4.9% this year and 5.1% next year.

The Philippines, with a rapidly improving economy, is among those looking to build a more solid foundation for the future. 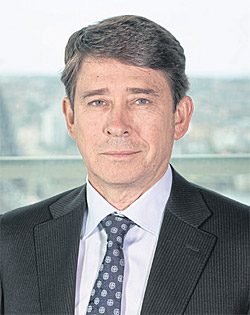 "Singapore clearly plays a hub role in facilitating infrastructure financing and the government is absolutely putting in place policies and resources to maintain that leadership” — TONY CRIPPS, CEO of HSBC Singapore

"With a concentration of 62% of GDP around Manila, opportunities to further develop the North and the South of the country are abundant," Wick Veloso, president and CEO of HSBC Philippines, told Asean reporters in a recent teleconference.

The infrastructure budget of $17 billion this year is up from $10 billion last year, and is forecast to reach $37 billion by 2022. HSBC, however, views that $90 billion worth of investment is a more realistic figure for the next five years.

Infrastructure financing has always been an issue in most Asean countries. High government debt in countries such as Malaysia and Indonesia means that foreign investment and public-private partnerships (PPPs) are crucial.

The Duterte government is revamping its PPP framework, as inefficient government bureaucracy, graft and political instability have deterred PPP investors in the past. It has lined up $26.2 billion worth of PPP projects for 2017-20 compared with $6.1 billion in the previous five years.

One of the "dream plan" transport projects prioritised for 2018-20 is a 581-kilometre rail line that will connect cities, seaports and economic zones with an estimated budget of $3 billion. As well, work is continuing on a $5-billion, 25km underground transport system connecting major business districts and government centres, to be completed in 2024.

"With a high-impact project, it should increase the economy's productive capacity, create jobs, increase incomes and strengthen the investment climate," Mr Veloso said.

Sumit Dutta, CEO of HSBC Indonesia, said infrastructure was strategically critical for Indonesia because it is a country of almost 17,000 islands. The government of President Joko Widodo has launched a "very ambitious" programme to link more islands together to optimise competitiveness.

"The government has identified total spending of over $400 billion in infrastructure and seven main sectors including airports, seaports, high-speed trains and two roads, with a total of 14 projects worth $28 billion identified for the years 2017 to 2019," he said.

The finance ministry in Jakarta estimates that the country will need $130 billion of investment from the private sector to meet infrastructure financing needs, he added.

Indonesia has spent only around 2% of its GDP on infrastructure in the past few years but that ratio is now expected to rise.

Projects highlighted by HSBC include the construction of 2,650km of roads, 15 new airports and 24 seaports, and 3,258km of rail lines linking Java, Sulawesi and Kalimantan, 49 new dams, 515,000 new affordable housing units, two new oil-refining units with capacity of 300,000 barrels per day each, and additional electricity generation of 35,000 megawatts.

Jakarta also wants to add 2,159km of intercity railways and 1,099km of urban lines to the existing network of 6,714km, which will require $24 billion from 2015-19. Another $11 billion has been set aside for Mass Rapid Transit (MRT) and Light Rail Transit (LRT) in six metropolitan areas and 17 large cities.

"So clearly this is a country on the move and as Asean progresses, Indonesia will benefit as well," Mr Dutta said.

Tony Cripps, CEO of HSBC Singapore, said the city-state was one of the most connected economies in the world with world-class infrastructure, and while it continues to build, its main focus will be on financing a lot of the US$2 trillion in projects Asean is expected to develop between now and 2030.

"In terms of financing, Singapore clearly plays a hub role in facilitating infrastructure financing and the government is absolutely putting in place policies and resources to maintain that leadership," he said.

"Nineteen of the world largest asset managers are domiciled here in Singapore ... and the country is now the one of the top three hubs for foreign exchange. It is now larger than Hong Kong and it has ambitions to overtake New York and sit behind London."

China's ambitious Belt and Road initiative, which overlaps with some of the projects in the Asean-5, and integration initiatives via the Asean Economic Community (AEC) will also create more demand for infrastructure and related financing.

"Singapore is in partnership with China in the financing of the infrastructure around the Belt and Road and the relationship is very strong in that regard," Mr Cripps said.

Singapore's key infrastructure investment goal is to double its metro rail system coverage by 2030. The government will own the rail assets and the operators will run them for a licence fee.

Work is now under way on the 43km Thomson-East Coast Line, while two additional MRT lines are planned to open in 2025 and 2030.

Thailand, meanwhile, has been held back by political instability, a sluggish bureaucracy and spotty access to financing. Eighty-five percent of the $52 billion invested in infrastructure projects between 1990 and 2015 went to power and telecom projects.

Under the current military government, the focus has shifted to transport with a plan to spend $186 billion or 5.3% of GDP on infrastructure from 2017-26. But given the delays, HSBC believes the investment will be just 3-4% of GDP between 2017 and 2021.

The Transport Ministry's master plan for public investment from 2015-22 identifies 56 projects worth $70 billion. Twenty projects worth $44 billion were approved in 2016 and 16 have either started construction or are going through the bidding or contract-signing process. The other 36 are all included in the 2017 action plan and cover rail, road, air transport and seaport construction.

HSBC views Malaysia's infrastructure as "largely mature" as the country has invested heavily in roads and railways over the past few years, but there is still a push for greater internal and external connectivity via an enhanced railway network. The current five-year plan calls for investments of $85 billion, up from $50 billion for the 2011-15 period, but the problem is that the government's debt-to-GDP ratio is already very high, at close to 55%.

This means that foreign investment is important and for this the country is becoming more dependent on China. Chinese companies' participation in the country's construction projects has been rising in the past decade.

In November 2016, Chinese and Malaysian companies signed 14 agreements worth $33.5 billion. For example, Malaysia Rail Link and China Communications Construction have teamed up on the East Coast Rail Link from Kuala Lumpur through Pahang, Terengganu and Kelantan, ending in Tumpat.

Two other key rail projects worth a total of $9.75 billion -- the Gemas-JB double-tracking project and the East Coast Rail Line -- were also awarded to Chinese contractors recently.