The 4 virtues of B.Grimm
Business

The 4 virtues of B.Grimm

By marrying profit, progress and social good, Harald Link has found the secret to keeping the oldest companies eternally young.

Harald Link:"If I were not in business, I would still be in university, working as a professor. I have a scholarly mind." (Photo by PAWAT LAOPAISARNTAKSIN)

Inside the house lie gentle reminders of his fortune. A highly valuable Cambodian statue rests beside a Giacometti painting. A heavily windowed wall showcases a dozen or so pieces of Sotheby's-grade artwork. An old concert piano gracefully blends into the living room's airy atmosphere.

The man himself sits on an ivory-coloured couch that has long lost its brilliance -- his posture impeccable. The couch's springs give way easily, hugging him as if they had become acquainted with his outline years ago. The tables around him are peppered with photographs of children, horses, or a combination of the two.

Harald Link, the owner of that worn-out couch, could be anyone's grandfather.

Granted, not all grandfathers have blue eyes and greying blond hair. But there is something grandfatherly about this 62-year-old man, almost in a universal sense. His voice is soothing and steady. He is obviously used to giving advice. He smiles ... a lot. He knows how to deliver home truths gently, even to millennials.

Mr Link likes to preach, but he has earned the right to. He broke into Forbes's Billionaires list last year, thanks to his role as chairman of B.Grimm Group, which his grandfather acquired in the early 20th century.

He also built the largest polo club in Thailand, supports more than 13,000 schools and is saving tigers around the country. When Mr Link speaks, people listen. 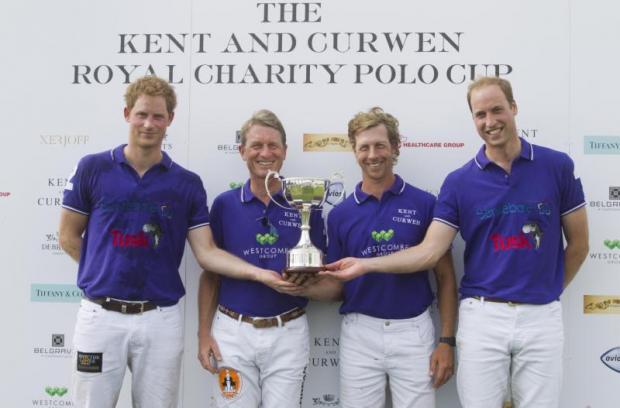 A company for the long run

His group was established in Bangkok 139 years ago by a German pharmacist by the name of Bernhard Grimm and his Austrian partner, Erwin Mueller. The small shop originally provided chemical products and was one of the earliest incorporated businesses in the country.

Mr Link's grandfather joined the venture in 1903 to help manage the enterprise. The company soon expanded into a sprawling conglomerate with interests in energy, industrial systems, lifestyle, transport and real estate. As one of the oldest developers in Thailand, the group built the Rangsit canals, the largest infrastructure project on the continent at the time.

By 1978, Mr Link had earned an MBA from St Gallen University in Switzerland and was married. His bride, the princess of Liechtenstein, would prove an integral part of his social projects over the years. Soon thereafter, Harry took the reins of the company.

As chairman, Mr Link expanded all of the company's traditional businesses and moved into new sectors like renewable energy. He also worked to cement the company's relations with partners like Carrier, Siemens and Merck. 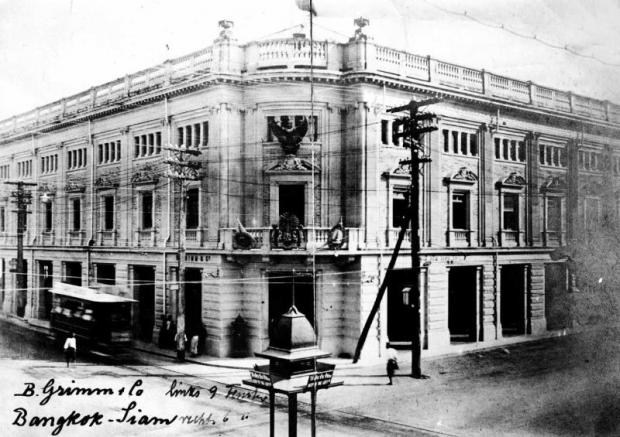 "If I were not in business, I would still be in university, working as a professor," he says. "I have a scholarly mind. I am deeply influenced by the Bible and by Buddhist texts, which is perhaps why I dwell so much on company culture and philosophy."

Mr Link easily rolls off up-to-date stock prices and projected ROI numbers for each of his projects, but he is by no means a manager purely concerned with financial metrics.

"Company culture is perhaps the most important element of the company. I remember one day at Stanford I just sprang from my chair and asked: 'Professor! You keep talking about corporate culture, but you have never told us how to change it.' The room was quiet," Mr Link says, rising from his seat.

Mr Link is a builder. He views his firm as a living entity that can achieve social objectives and push technological advancements.

"We wanted to build an institution that is not family-dependent," he says. "If you look at our history, we have been run professionally for most of our history. Most of our CEOs are outsiders, and our board includes five independent directors."

Siam Dispensary, B.Grimm's first pharmacy. The shop opened on Soi Oriental Hotel in 1878, during the reign of King Rama V.

Mr Link has worked hard to sharpen the values the company has come to stand for.

"We are guided by four Ps, and profit is not one of them," he says. "The first is positivity -- being happy at work and going back to your wife with a smile on your face at the end of the day. The second one is professionalism, the third is partnership and the last one is pioneering spirit.

"It is not a coincidence that we have four principles. Our values are grounded in Buddhism's four virtues, also known as the four immeasurables: benevolence, compassion, empathetic joy and equanimity."

For Mr Link, his obsession with corporate culture does not end with the company booklet.

At 139 years, B.Grimm is old enough to be included in the best-selling book Built to Last, although old is the last work Mr Link would use to describe his firm.

"Our company is not old," he says. "Old companies are 'old' because they were always new. They kept innovating in the face of changing circumstances."

In 2015, B.Grimm made its entrance into the renewable energy sector.

"We secured a wind concession, and we recently won a concession for a solar power plant, although we don't have exact investment numbers yet," Mr Link says. "We also have a number of hydropower plant investments in Laos, the first one of which will go on stream next month, and we have eight more coming up." 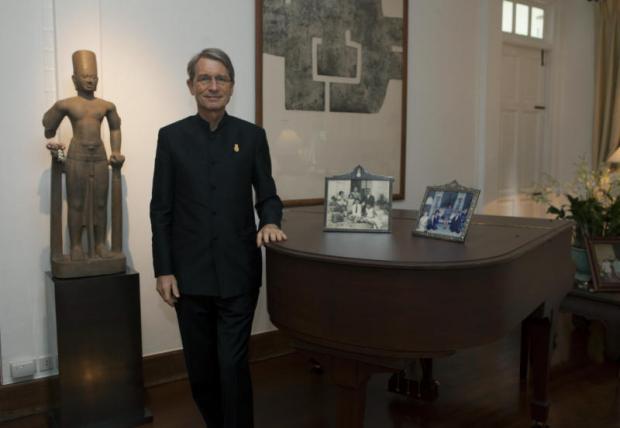 The one thing managers have yet to understand is that you can make a profit and do good for society. The two concepts are not divorced, but go hand in hand, Mr Link says.

"Our business is a tool that allows us to give back, and deliver on some of the projects that are close to our hearts, including education and cultural preservation," he says.

His daughter is heavily involved with The Little Scientist House, a German educational programme that teaches children how to have fun with science. Within a few years, the method was integrated into more than 13,000 schools.

"What makes this programme special is that companies are taking responsibility for it," Mr Link says. "Each company looks after a number of schools nearby. They go to the kindergartens and answer any technical questions the teachers may have, and see that everything is running correctly."

Mr Link himself was integral to bringing vocational training to Thailand. More than 30% of Thailand's GDP comes from industry, but the region is increasingly competitive. 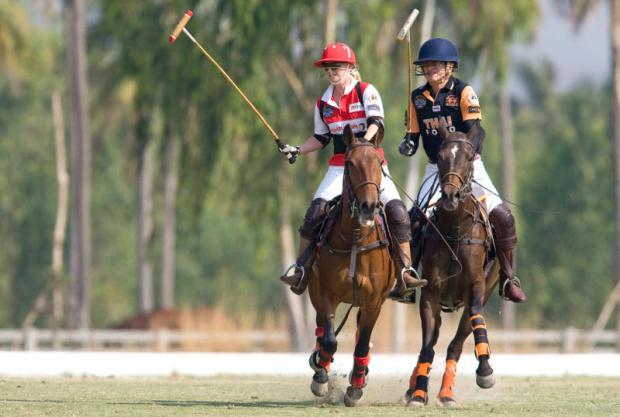 Mr Link with daughter Caroline, who shares his interest in polo.

"Neighbouring countries have cheaper labour, so a lot of investment is being channelled there," he says. "What Germany and Switzerland have, and what until recently we were missing is a good training system for industrial workers."

People in traditional college programmes often miss out on the application part and have to be taught at the company's own expense, a liability in today's competitive job market. In Germany's dual vocational training framework, companies, with the aid of the government, take young students and give them the technical know-how to perform in the profession, Mr Link says.

"The problem in Thailand used to be that parents wanted the paper," he says. "They wanted their kids to go to college and get the paper. They didn't care that much about what the kids did afterwards; at least they could say they finished school.

"We knew the programme would only work if we had the department of education on board. The opportunity finally came 12 years ago, when I was at lunch with two of his [the education minister's] classmates: the secretary of the vocational training system and the deputy minister."

B.Grimm signed a memorandum of understanding with the minister soon thereafter.

"Now the ministry of education is a merry-go-round," Mr Link says. "Fortunately, he was one of the only ministers to stay on for two years, so he had time to push our project."

Today, the project is called German-Thai dual educational excellence. B.Grimm collaborates with the Thai Chamber of Commerce to certify its students. 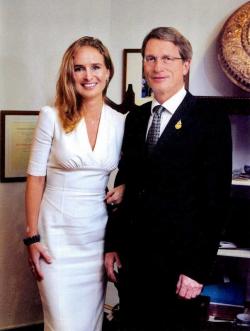 Mr Link with daughter Caroline, who is well placed to be the fourth-generation successor.

Mr Link has been in business for over 40 years, but he has no plans to retire.

"I started working at twenty, and I realised that I like listening," he says. "I like to sit down with successful people and figure out how they got where they are now."

Now Mr Link is on the other side of the table, counselling his two kids and looking after his newborn grandchild.

"Only my daughter followed me into the business, and her husband has a pretty substantial business himself, so we are grooming the baby to become our successor," he says.

Recorders should never be turned off at the end of an interview, at least that's what they teach in journalism school. The subtler hues of a personality come across only when business is done and ties are loosened. And so it was. After offering a plate of papaya and orange juice, Mr Link walked his guests to the porch.

"Don't worry guys, I am also the butler of the house," said one of the wealthiest men in Thailand. 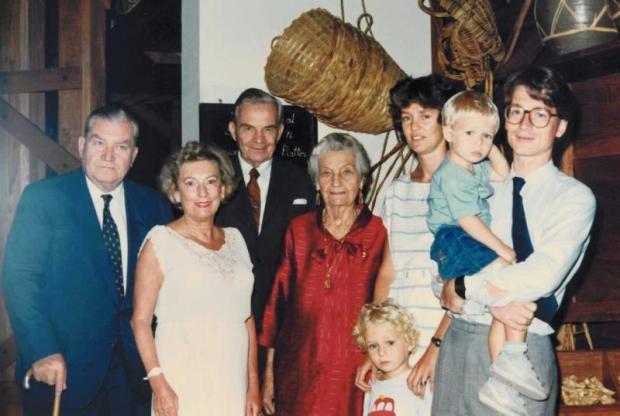 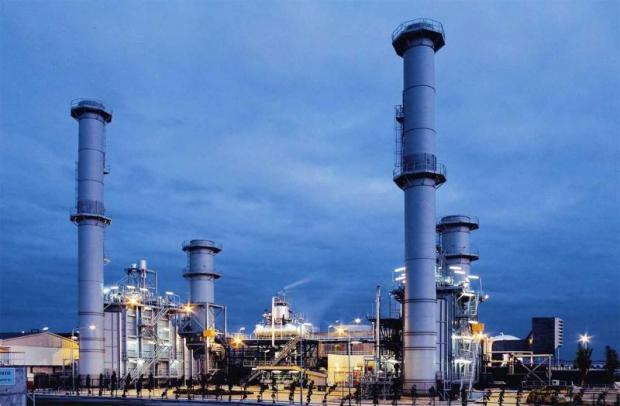