SETTING THE STANDARD: Above, MontAzure is a luxury development on a 75-rai hillside plot on Kamala Beach. Below, Crest Resort & Pool Villas is an eco-friendly resort. Photos: Bangkok Post Archive

As reflected by increased construction activity, prospects in the Phuket real estate industry look promising. While demand in the holiday home market has seen signs of recovery, multiple infrastructure projects that have been developed will facilitate growth in tourism, the main driver of the southern island's economy. All these bode well for the different property sectors on Phuket.

Observations by JLL show several residential projects being developed in Phuket. These include the third phase of Twin Sands developed by A Plan Property in Tri Trang, which is located opposite the brand-new Rosewood Hotel. Twin Palm Residences by MontAzure at Kamala is another project where construction is well under way, with services to be provided by Twin Palms once completed. Diamond Condominium in Bangtao, close to Laguna, is another new development.

The beaches, lifestyle and food air connections have put Phuket ahead of most other resort locations in the region and made the island a favourite of many nationalities for purchasing a holiday home or retirement property. Therefore it is no surprise that most of the high-end residential developments in Phuket are targeted at foreign buyers.

Previously, the top source markets for villas and resort condominiums in Phuket were purchasers from Britain, the US, Scandinavian nations, Russia and the Middle East. However, in recent years a number of factors reduced the demand by buyers from these markets, including the global financial crisis of 2008-09 and the slow, weak recovery that followed. Other contributing factors included concerns about European sovereign debt, the collapse of the Russian rouble, the plunge in world oil prices in 2015, and the Brexit vote last year in the United Kingdom.

Buyers from some of these markets have now had time to reset and are coming back. At the same time, other traditional source markets including Hong Kong and Singapore have showed continued interest.

Though demand is picking up, the pace of recovery has been moderate, as buyers tend to spend a long time making purchase decisions.

Apart from a wide choice of both new and used properties available for sale, the stricter enforcement of legal compliance on the island's property industry has made prospective buyers exceptionally selective.

The background of the developer and the property manager remains the main factor that many buyers are concerned with, as they need to be sure that their properties are developed legally and looked after properly.

The opening of the new terminal at Phuket International Airport last September increased annual handling capacity from 6.5 million to 12.5 million passengers. Additionally, a number of ongoing and future infrastructure projects are expected to help alleviate traffic congestion. These include the Sam Kong (completed) and Bang Khu underpasses, the Patong-Kathu Tunnel and the Phuket Light Rail System. With these improvements, the island will be able to accommodate continued growth in visitor arrivals.

The main sources of foreign visitors to Phuket this year have been from China, Russia, South Korea, Australia and Germany. Despite a drop in arrivals in late 2016 and the first half of 2017 resulting from the Thai government's crackdown on "zero-dollar" tours, Chinese arrivals showed a recovery in May and June of this year and experienced growth compared with the same months in 2016. Visitor arrivals from Russia have also started to recover as economic conditions in Russia stabilise.

In terms of construction activity, the Phuket hotel and hospitality market has been active this year, with numerous new hotels being developed. Cassia phase 2 in Laguna, Rosewood Tri Trang, Movenpick Mai Khao and Hotel Indigo are just a few, but there are many more in various stages of development.

The Phuket retail market is also seeing an increase in development as big names prepare for expected growth in visitor numbers. Central is developing a new mall opposite its current Central Festival near Phuket Town and Kathu. Occupying a 111-rai site with a development budget of around 20 billion baht, it is expected to complete at the end of this year. The Mall Group is developing Blue Pearl Phuket, situated on a 150-rai site in Kathu on the way to Patong. It will feature a huge retail space, conference facilities and entertainment components upon completion.

These new retail developments will provide much-needed variety for the people who call Phuket home and also for tourists looking to shop while on holiday and who may need a break from the breathtaking beaches.

The outlook for the Phuket property industry remains promising. The strong reputation of the island as one of the world's top resort destinations will continue to attract visitors and holiday/retirement home buyers from around the world.

Stepped-up enforcement of legal compliance throughout the property industry should also help improve transparency, which is much needed by both local and foreign buyers seeking properties for their own use or as an investment. Coupled with more future infrastructure improvement projects planned, including a light rail route, we can expect the Phuket real estate market to be more robust in the near future. n

Dexter Norville is a director at JLL, a professional services firm specialising in real estate. For more insight, readers can contact him on 02-624-6400, email dexter.norville@ap.jll.com, or visit www.jll.co.th 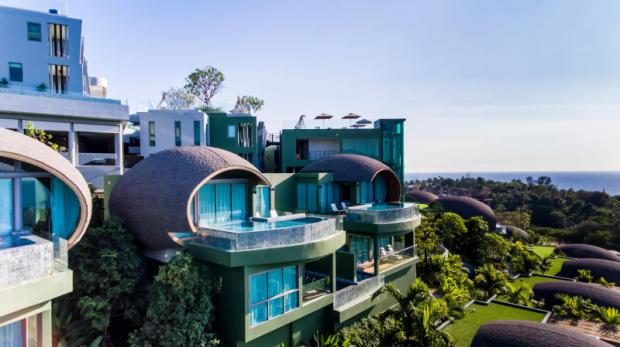 TAKING OFF: The opening of the new terminal at Phuket International Airport last September increased annual handling capacity from 6.5 million to 12.5 million passengers.

How the Covid crisis transformed how we look at talent