True Move manages to slide into No.2 spot

Growth of 8% in service revenue for the three major mobile operators in the first half of the year reflects the sector's health, as data usage is up and fierce competition is waning.

The three operators' second-quarter financial reports to the Stock Exchange of Thailand showed that 68% of service revenue was generated by non-voice or data service, with the remainder coming from voice service.

True Move's data revenue in the second quarter was 10.4 billion baht, accounting for 66.3% of the total, while the rest, 5.3 billion, was from voice.

Revenue from data service for the three operators in the second quarter soared year-on-year. AIS's data revenue increased 21%, DTAC's was up 27% and True Move's grew 25%. 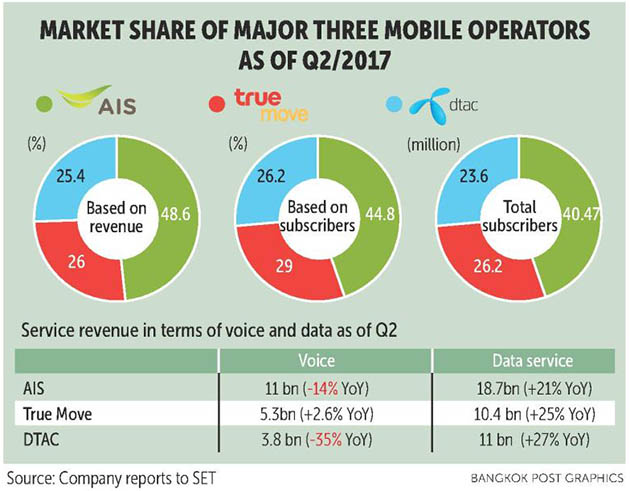 The CIMB Thai analyst said the use of mobile data service would continue to grow in line with changing consumer behaviour, driving up revenue for mobile operators.

"It seems that the telecom business is on the up-and-up after reaching bottom last year," the analyst said.

Meanwhile, a significant change in the second quarter was True Move's ascendancy to the No.2 spot among mobile operators. True Move overtook DTAC in terms of both subscribers and revenue.

True Move boasted the highest net subscriber gain in the second quarter, bringing on 400,000 new subscribers, while the number of AIS and DTAC subscribers declined by 200,000 and 705,000, respectively.

Market share for True Move in terms of revenue also increased, bringing it to second place with 26%. AIS controls 48.6% of the market, while DTAC has 25.4%.

"True Move's heavy investment in its network and marketing campaigns paid off," the analyst said.

The analyst pointed out that even though DTAC lost 5.4% of its subscribers year-on-year, becoming the third-largest operator, its average revenue per user increased by 8.8%, resulting in 2.3% year-on-year service revenue growth.

"We'll continue to fight and maintain our competitiveness in the market, supported by ongoing densification of our network to enhance the mobile internet experience and effective marketing activities," Mr Norling said.